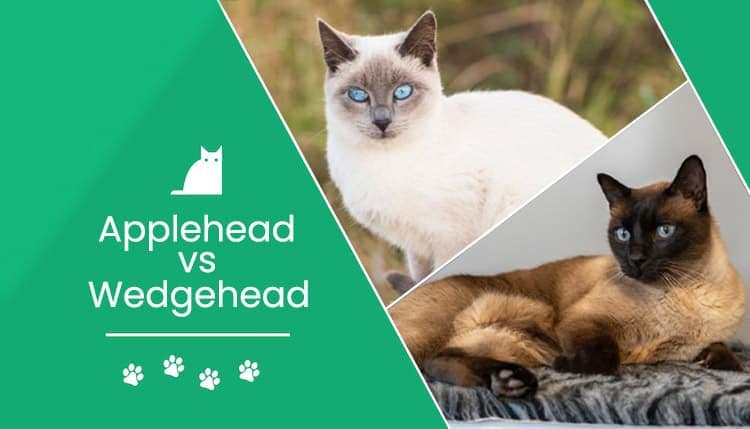 Siamese cats are one of the most popular and recognizable cat breeds, with their pointed coats, unique vocalizations, and deep blue eyes. The Siamese breed hails from Thailand, formerly known as Siam, and has been revered in the region for centuries. It wasn’t until the late 1800s that the breed graced the shores of the United States with their presence.

At first, only the Classic Seal Point was shown and accepted, but other color variations were soon developed. With this development came not only differences in coat colors and markings but also other drastic changes in appearance. There are now three different accepted varieties of the Siamese: the traditional or “Apple Head” Siamese (the original breed that was first imported to the U.S.), the Classic Siamese, and the Modern or “Wedgehead” Siamese.

In this article, we’ll take a look at the two most popular and well-known varieties, the Applehead and Wedgehead Siamese, and parse out exactly what makes them so different.

The main distinguishable visual difference between these two Siamese varieties is their uniquely shaped heads. The Applehead variety, as the name suggests, has a large, round head with a large and muscular body, typically larger than the Wedgehead. Their eyes are also slightly rounder in shape, and they have a shorter tail than the Wedgehead too. The Wedgehead Siamese has a far more extreme, wedge-shaped head, with a lean and light body, wide-set ears, and a long, thin tail. Their eyes are more slanted than the Applehead, and due to the unique shape of their head, they appear to be bigger in size.

The Applehead or Traditional Siamese is the original breed that was brought over from Siam in the late 1800s, and the breed had likely been that way for centuries. They were treasured cats of Siam’s royal family and were often given as gifts to other royalty and heads of state. These cats were even said to have wisdom and mystical powers and were employed to receive members of the royal family’s soul upon their death.

The unique and beautiful coat and markings of these cats made them instantly popular upon their arrival in the U.S., and the breed has spread and flourished widely since.

The Applehead Siamese has all the personality traits commonly associated with the breed. They are affectionate, intelligent, playful, gentle, and vocal, although they are known as the quieter Siamese variety and are not as vocal as the Wedgehead variety. They are attention seekers by nature and love to be close to their human caregivers, so much so that they are known to become depressed when left alone for long periods. This is why many Siamese owners and breeders recommend getting a pair of Siamese cats rather than a single cat.

While Applehead Siamese cats are an active and playful breed, they are not as playful as their Wedgehead counterparts and prefer to laze on their owner’s laps or the sofa for most of the day.

All Siamese cats, including Appleheads, are extremely intelligent and easy to train. Siamese cats are widely considered to be “dog-like” cats in behavior and temperament, and since they love to be close to their owners as much as possible, they are usually a breeze to train. Positive reinforcement methods are ideal, and it’s best to begin training as early as possible to avoid any bad habits from forming.

Siamese cats are not overly active cats, but they still need regular exercise every day to stay healthy and happy. They do not need a huge amount, though, and around 30 minutes of interactive play is plenty. Balls, fetching games, lasers, hide and seek, and scratching posts and climbing trees are all great ways to provide them with adequate exercise.

The Applehead Siamese has a short and smooth coat that is a breeze to keep groomed. Even just regular petting and stroking is usually enough to keep their coat smooth, but brushing once or twice weekly will help remove any dead hair.

The Applehead Siamese is considered a healthy variation of the Siamese breed, certainly more so than the Wedgehead. They have an exceptionally long life expectancy — up to 25 years, in rare cases, which is far more than most other cat breeds. They do not have many serious genetic health issues, although they are known to suffer from certain eye problems, including glaucoma and progressive retinal atrophy.

The Applehead Siamese is, like all Siamese variations, an ideal family cat with unsurpassed loyalty and affection toward its caregivers. They are friendly and gentle with children and great with other cats and dogs too. They have an incredibly long lifespan, so bringing home an Applehead Siamese is quite the responsibility.

The Wedgehead Siamese is the newest of the Siamese variations and is a favorite for cat shows. In fact, the variation is simply referred to as “Siamese” by many registries and breeders, even though it is a unique and extreme version of the classic Siamese. The Wedgehead Siamese has an extremely distinguishable wedge-shaped head, with a muscular, slim, body, long legs, and long, thin tail.

Wedgeheads are highly active, highly vocal, and extremely affectionate cats. They are attention-demanding cats like all Siamese, but arguably more so than other variations, and they will let you know when they want something by their almost incessant vocalizations! These cats love to be wherever their owners are and will suffer from separation anxiety if left alone for long periods.

Wedgehead Siamese cats, like most Siamese, are exceptionally loving and affectionate and almost dog-like in the bonds that they form with their family. They are happiest when curled up on their owner’s lap — or as close as possible — and are even known to follow their owners around the home.

The Wedgehead Siamese is highly intelligent and loves to interact with their owners as much as possible and is thus a breeze to train. They are more active and agile than their Applehead counterparts, but they still don’t require a massive amount of exercise. Around 30-45 minutes is perfectly fine for this breed, and they love interactive toys that mimic their natural prey instincts. Due to their lithe and muscular bodies, these cats have amazing agility, and they’ll love a cat tree to climb on and get above the action.

Grooming these cats is a breeze, and a light brushing once or twice a week is perfectly adequate to remove any dead hair. Unfortunately, the Wedgehead Siamese is prone to a fair amount of health issues, certainly more than any other Siamese varieties.

Due to the unique shape of their head, they have less space than usual for teeth to grow and are prone to dental issues, so they will need regular teeth brushing to ensure dental health. These cats are also at higher risk of both kidney and heart disease, as well as respiratory issues due to their triangular heads. While they can live lives as long as other Siamese varieties, some may only live up to 8 years because of these issues.

The Wedgehead is as friendly, affectionate, and loyal as any Siamese cat, making them ideal family companions. They are great with children and dogs and slot perfectly into most family situations. These cats are attention-demanding and require an owner who is around frequently. If you are away at work all day, this breed may not be the ideal choice.

What Are the Differences?

While the Applehead and Wedgehead Siamese are of the same breed, there are notable physical differences between the two. Personality-wise, the two are similar, and both make great family companions that are easy to train and gentle and friendly with small children.

Applehead Siamese cats are fairly simple to tell apart from the Wedgehead variety; they have more stocky, muscular, and larger bodies, rounder eyes, and a shorter tail. Wedgehead Siamese cats are smaller, with lither and slinkier bodies and slanted eyes that appear large on their unique triangular-shaped heads. They are also not as healthy as the Applehead varieties and have serious health concerns to be aware of, resulting in a lower than average lifespan.

Can Cats Eat Pumpkin Seeds? Everything You Need to Know!

Yes, cats do and should eat pumpkin seeds without suffering any adverse effects. Pumpkin seeds are packed with nutrients that…
The category

How High Can a House Cat Jump? (Highest & Average Jumps)

Some cats are impressive athletes, while others prefer a leisurely nap that takes up most of the day. But most…
The category

Cat Bitten by Snake – What Should I Do? (Our Vet Answer)

Luckily for our feline friends, snake bites in cats are relatively rare compared with their canine counterparts. Cats tend to…