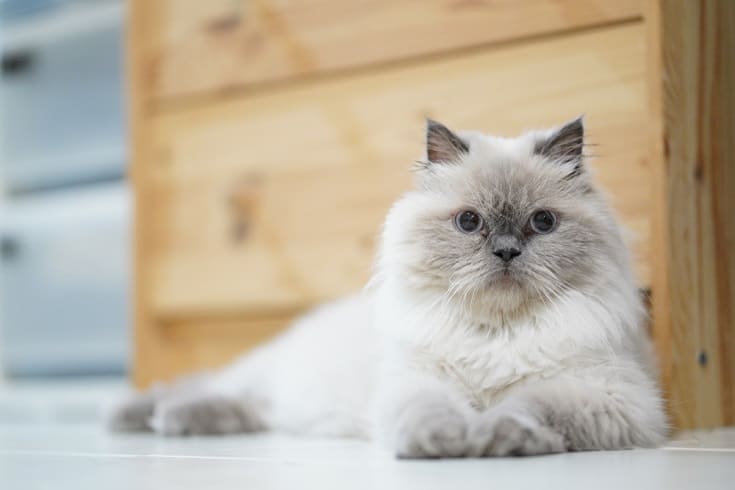 Are you a feline fanatic that suffers from cat allergies? It might seem like a cruel twist of fate, loving an animal that you can’t keep as a pet. But if you’ve heard of hypoallergenic cats, you might be wondering if they’re a viable solution. Unfortunately, there are only a few cat breeds that are considered to be hypoallergenic, so your pickings are rather slim.

Himalayan cats are very popular felines, known for their sweet tempers and gentle nature. They look similar to Persian cats, only with colored points. But if you were hoping to bring one of these cats home as your new companion, you’ll be disappointed to find out that they’re not hypoallergenic. However, there are some Himalayans that produce fewer allergens than others, though this doesn’t mean they’ll make a good pet for someone who suffers from cat allergies.

What is a Hypoallergenic Cat?

Approximately 10% of the population is allergic to household pets, with cat allergies being twice as prevalent as canine allergies. These cat allergies are caused by a very specific allergen known as Fel d 1, which is found in cat saliva. But not all cats produce this allergen equally. The cats that release less of the Fel d 1 allergen are considered to be hypoallergenic.

Are Any Cats Truly Hypoallergenic?

The truth is, the Fel d 1 allergen is present in all cats; even those that are considered hypoallergenic. Because of this, no cat is truly 100% hypoallergenic. As such, even hypoallergenic cat breeds can cause reactions in people with cat allergies. If you were hoping that hypoallergenic cats were the solution to your problem, you might find this news to be disheartening, but there’s no reason to give up hope yet.

Are Himalayan Cats Bad for People with Cat Allergies?

Quite a few cat breeds are considered hypoallergenic because they produce less of the Fel d 1 allergen. Unfortunately, Himalayans aren’t one of them. Because of this, they’re a poor choice of pet for anyone who has cat allergies; even if your allergies are only mild. Worse, they’re long-coated cats that are known for shedding far more than other breeds. This means that Himalayan cats are actually one of the worst breeds for someone who suffers from cat allergies.

Even among cats of the same breed, there can be pretty drastic differences in the number of allergens each cat releases. As it turns out, kittens produce far fewer allergens than adult cats, and they often don’t release enough of the Fel d 1 allergen to cause a reaction in those who only suffer from mild allergies to cats.

As a result, many people bring kittens home thinking that they’re not allergic to that kitty. Later on, as the cat ages and begins to produce more Fel d 1, the person mistakenly thinks that they’ve developed a cat allergy that didn’t exist before. In truth, they’ve been allergic the entire time, but the kitten was producing enough Fel d 1 to cause a reaction.

It’s not just kittens that produce less Fel d 1 though. Female cats also release less of the Fel d 1 allergen, so they have a reduced effect on those who suffer from cat allergies. Keep in mind, male and female cats display quite different personalities. If a female isn’t preferable to you, then you should get a male cat that’s neutered. If a male cat is neutered early enough, it will drastically reduce the amount of Fel d 1 that it produces.

Even though females, neutered males, and kittens produce less Fel d 1 than other cats, it’s not usually enough to prevent allergic reactions in those with cat allergies. If you are allergic to cats, your best bet is to get a female or neutered male of a hypoallergenic cat breed, so you can be certain that you’ve reduced the number of allergens in your home as much as possible.

So, what cat breeds are classified hypoallergenic? There are 14:

How to Reduce Cat Allergens

Maybe you have your heart dead-set on a Himalayan cat and you just can’t settle for any other breed. Or perhaps, you want to even further reduce the number of allergens released by your hypoallergenic cat. Whatever the case is, you have several options available that can help reduce the amount of Fel d 1 that can be found in your home.

However, it should be noted that you will not be able to eliminate the allergens entirely. In the United States, 67% of households have pets. But you might be surprised to hear that 90% of all households within the country have detectable levels of dog or cat allergens! This demonstrates that even if you don’t have any pets, more than likely, your home still contains allergens from dogs or cats.

So, how can you reduce the number of pet allergens in your home?

Many of the allergens found in your home are simply floating through the air. Luckily, HEPA air purifiers are affordably-priced and super simple to use. Just activate one in each room and the number of airborne allergens in your home will decrease in a major way.

If you want to keep the allergens in your home to a minimum, you’ll need to stay on top of dust and dirt. Use spray furniture polish whenever dusting for maximum effect. And make sure to dust daily if you really want to avoid those allergens.

3. No Pets in the Bedroom

Even though you may love to cuddle up with your cat on the bed, it’s a terrible idea; at least as far as allergens are concerned. The textiles on your bed and in your room, including carpet, curtains, sheets, and more, will all hold onto the allergens from your cat, just waiting to cause a reaction in you when you crawl into bed.

One of the simplest ways to get rid of those excess allergens is to vacuum every day. This will help to eliminate any of the allergens that have settled on the floor. Make sure to use a HEPA vacuum with micro-filtration for maximum effect.

Textiles such as fabrics and carpet act as a magnet for allergens. They hold onto those allergens for a long time. If you want to avoid allergic reactions, make sure to wash all of your textiles as often as possible. That includes things like window curtains, furniture, tablecloths, bed linen, clothing, and more.

Just because you suffer from cat allergies doesn’t mean you can’t keep a cat as a pet. Some cats, known as hypoallergenic breeds, release less of the Fel d 1 allergen that causes cat allergies. All of these hypoallergenic cats will have less of an impact on cat allergies, though severe allergy sufferers may still have a reaction.

Unfortunately, Himalayan cats aren’t one of these hypoallergenic breeds. Moreover, they have long coats that shed far more than other breeds, making them one of the worst choices for anyone with cat allergies. Opt for a hypoallergenic breed instead. And if you want to reduce the allergens your cat releases even further, then choose a female, or have your male cat neutered.

Maine Coon cats are the biggest and one of the oldest domesticated cats. With their thick shaggy coats, long fluffy…
The category

Cat owners the world over know that cats can be unpredictable creatures. One minute you’re having a nice cuddle on…