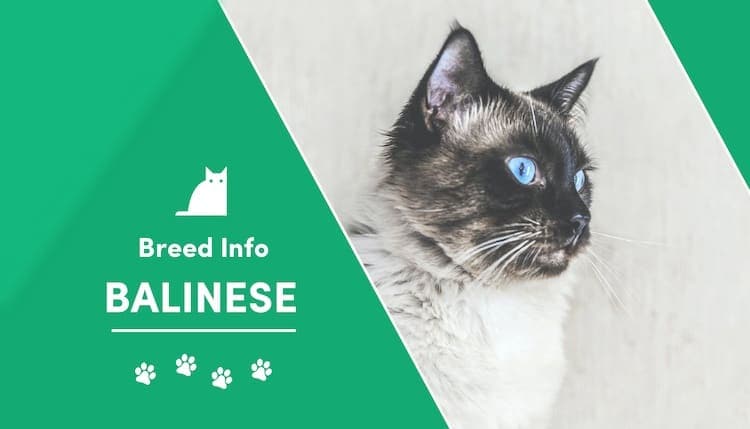 The Balinese is a svelte cat with a muscular body that’s stretched out to make a long and elegant feline. With colors and patterns that closely resemble the Siamese cat, the Balinese is distinguishable by its much longer coat. Recognized by the Cat Fanciers Association, the Balinese is a beautiful cat that’s capable of winning competitions.

Balinese are widely regarded as some of the smartest cats around. They’re easily trained and are willing to learn new tricks if you teach them using positive reinforcement. These cats are very loyal and loving, balancing their need for affection and playtime. You can expect them to seek a lot of interaction, but they won’t be overly demanding about it.

These cats are great with children and other pets, making them perfect for families who can give them the large amounts of interaction and attention that they crave. They’re known for being very vocal and talkative cats, and they’ll chat your ear off if you give them the opportunity!

Balinese Kittens – Before You Buy…

Balinese cats are highly intelligent and need a lot of stimulation. When you’re not home, you’ll need to provide many toys, preferably ones that involve puzzles unlocking treats, to keep your cat from getting bored and causing trouble. These cats are extroverts and will require a lot of attention every day, which is why they’re best-suited for families.

Also, be aware that these cats love to talk. You’ll have to talk with your cat all the time if you get a Balinese. If that doesn’t sound like the type of companionship you’re looking for, then you’ll need a different breed.

What’s the Price of Balinese Kittens?

A Balinese kitten from a middle-tier breeder with a common pedigree could cost between $650-800.

For a cat suitable for competition, Balinese kittens with excellent pedigrees from distinguished breeding farms will cost over $750, often as high as $2,000.

1. Balinese Cats are an Offshoot of the Siamese Breed

The Balinese is an offshoot of the Siamese cat. Long hair is a mutation in Siamese cats that used to be cast out until the first longhaired Siamese was registered by the CFA. Then, in the 1950s, several breeding programs took root for these cats in America. After several generations of these breeders working together, the new breed had been formed and the long coat trait had been firmly implanted, creating the longhaired Siamese cat.

2. They’re Named for the Dancers of a Country They’re Not From

Siamese breeders weren’t thrilled about the new breed sharing a name with their well-established breed, so a new name was needed to differentiate between the two. Helen Smith, one of the primary breeders of the new longhaired Siamese cats, came up with the name Balinese. It’s a name that’s supposedly in reference to the famed dancers of the country Bali. Ironically, the cat has never had anything to do with that place.

3. They’re Some of the Most Vocal Cats

Balinese cats are known for their lengthy conversations with their owners. These are very vocal cats, and they’ll talk as long as you’ll continue to listen. They get great pleasure from conversing with their people, so if you’re a person who loves to personify your pets, then you’ll be a great match with a Balinese cat!

Temperament & Intelligence of the Balinese

Balinese are extremely playful cats that love to goof around and get your attention. They’re also incredibly intelligent, easily learning tricks with a little positive reinforcement. These cats are always trying to play around, so you’ll need a sense of humor and lots of energy.

Loyal and loving, the Balinese will want to be a part of everything you do, so expect them to end up under your feet! But they’re just trying to get your love because they’re affectionate cats who make perfect pets for families who love to cuddle as much as they play.

Families are the perfect match for Balinese cats, particularly if they have kids. These cats love to play and they’re very affectionate, so they need a lot of attention and interaction. One person may have a hard time providing enough stimulation for a Balinese, especially if they’re gone 40 hours each week for work.

Balinese cats are surprisingly dog-friendly, getting along with most dogs without issue. They’re also great with other animals, making friends easily. They’re affectionate with the whole family, which extends to the other pets.

Things to Know When Owning a Balinese:

Like all pets, your Balinese cat has the potential to become overweight or even obese. To avoid this, make sure you pay attention to how much you’re feeding your cat so you can avoid overfeeding. Aside from this, Balinese cats don’t have any specific recommended dietary guidelines.

Highly intelligent with plenty of energy, Balinese cats require a lot of exercise. You’ll need to play with them a lot, as well as providing toys that will keep them entertained and make them work. Other pets can also help to provide the exercise these cats need when they play together.

Because they’re so intelligent, these cats are relatively easy to train. They’ll usually learn commands and tricks rather quickly if they’re given a good incentive. They don’t like to be scolded though, so only use positive reinforcement.

They rarely need baths, though you can wipe them down with a damp washcloth from time to time. Other than that, you’ll just need to keep their claws trimmed and teeth brushed.

Though generally healthy overall, there are a few adverse health conditions that sometimes occur in Balinese cats.

Like with many cat breeds, the males tend to be a little bigger than the females. They weigh more and are often a bit taller as well.

An offshoot of the very similar appearing Siamese cats, the Balinese are an equally beautiful and elegant feline that’s a little less energetic and demanding. They share the same colors and shape, but the Balinese has longer fur, which is why is was once called the longhaired Siamese, before being ironically named after the graceful dancers of Bali.

These highly intelligent cats are quick to learn and need a lot of attention. But they’re excellent companions because they’re very loyal and affectionate. You’re going to need a sense of humor though. These cats are clowns that love to mess around get you to laugh. They’ll also talk to you as much as a child, so be prepared for a lot of conversations with your cat!

Have you always been a Siamese lover? The traditional Chinese breed isn’t for the faint of heart. But what happens…
The category

Plenty of us adore the gorgeous markings and fiery color of a red tabby cat, so whether you already own…