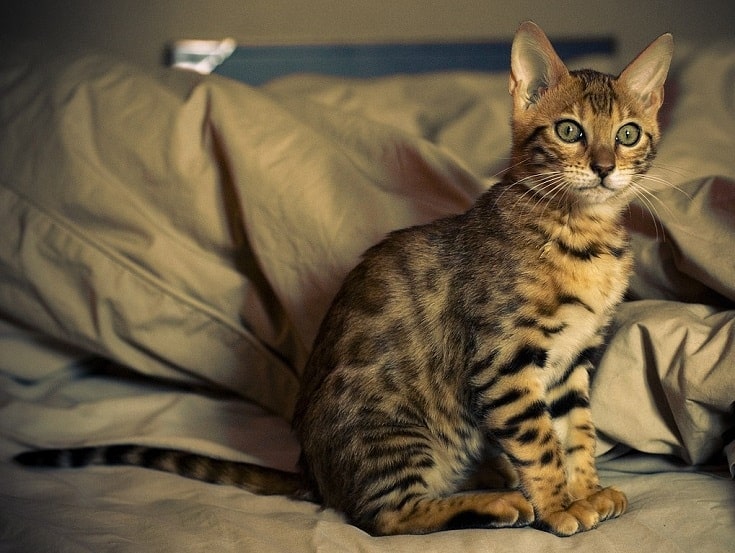 The Bengal cat is a uniquely beautiful animal, having all the domestic cat attributes that cat lovers know and love, combined with spectacular patterns and colors that imitate their wild ancestors. Two major aspects differentiate modern Bengal Cats: their coat color and their coat markings. These colors and patterns can come in a large degree of variance and intensity, but the basic breed-recognized colors are brown, silver, and snow, and each of these colors can be patterned with either marbling, spots, or a combination of both.

With all these variations in colors and patterns and the inevitable combinations, it can be difficult to know where to start in finding the right Bengal to bring home. We’ve put together this comprehensive guide to Bengal colors and patterns to help you identify and choose from the wide varieties available.

Bengals come in three standard, breed-recognized colors but can also come in a variety of “unrecognized” colors. While these colors are found in most domestic cats, the combination of color and unique patterning makes for a visually stunning animal. The spots or marbling can be in various shades and intensity and will give a beautiful contrast that is not found in other domestic cat breeds.

Brown Bengals are one of the most popular varieties and can be found in color range variations that include descriptions like golden, creamy, honey, caramel, red, and orange, with an orange-brown or butter-coat being the preferred standard base coat. This base coat is usually beautifully contrasted with dark chestnut or black markings, which can be varied solid rosettes or marbling and can also be tricolor, typically a dark outline with graduated shades of browns inside.

This color variety, whether with spots or marbling, is often referred to as the Leopard Bengal due to its close resemblance to this big cat. They usually have green or golden eyes and a solid-black tipped tail.

Silver Bengals have an almost pure white base coat that can vary from white to a steel-like silver shade, contrasted by black and grey spotted or marbling patterns. This can also include charcoal and blue shading in both base coat and patterns but should never include brown or golden tones on the feet or face. They will usually have green or golden eyes and a solid black-tipped tail.

The Snow Bengal comes in three different variations, and contrary to their name, their base coat is not pure white in color.

Although these colors are not officially recognized by Bengal competition standards, these rare colors are just as striking as standard Bengal color variants. They are typically caused by recessive genes that can crop up among standard litters.

This color variant is more of an additional masking layer than a separate color, as it is usually described as a “ghost” layer that comes out on top of Bengal’s standard base coat. Charcoal layers can be seen in any of the standard color variations and are then described as charcoal silver, charcoal brown, etc. They will typically have a dark face mask, with a thick, dark stripe running down the length of their back, known as a “cape.”

Blue Bengal variants are rare, and thus, these unusual cats are highly prized animals. They have a steel-blue or powder-blue base coat with occasional cream tones and a dark, grey-blue marbled or spotted patterning. They will typically have hazel brown or green eyes.

These prized cats are revered for their resemblance to black panthers and will typically have a base coat with marbled or spotted patterned colors that are almost indistinguishable from each other, giving them an almost solid black appearance. The patterns on these cats are usually referred to as “ghost markings,” because other than in bright sunlight, they are virtually invisible.

While a Bengal’s markings typically fall into two distinct categories — spotted and marbled — there is a wide variety within each category of pattern that Bengals can display. Spotted variants were the first recognized pattern type, with marbled cats coming soon after.

A spotted Bengal is the most popular and most recognizable pattern variety, at times closely resembling baby leopards. The spots are usually small to medium-sized patterns that are scattered all over the cat’s coat, with large, dark spots on a light background being the most highly prized variation. These spots can appear in many different colors and shapes, each with a distinct category described by breeders.

The marbled pattern is a series of swirls and stripes that intermingle in a flowing, random pattern made up of two or more color variations. This patterning can come in a wide variety of shapes and colors, which are typically divided into four distinct categories by breeders.

A sparbled coat is the meeting of spotted and marbled varieties, creating a marbled and rosette clashing of markings. Although it is not an officially recognized pattern, it is still beautiful to behold, especially when there is significant negative space between the chaotic patterns. This coat variety can become all the more dramatic when mixed with clouded or charcoal markings, making for a unique looking Bengal indeed.

If all that variation is not enough for you, there is yet more to the incredible Bengal Cat!

These unique and wild-looking cats have dramatic variations of color and patterns, resembling the wild ancestors they came from. These cats are the gentle, domesticated versions of leopards, tigers, cheetahs, and jaguars, with almost all big cats being represented in miniature by Bengals.

The modern Bengal breed began in the early 1960s, thanks to Jean Mill, when she made the first deliberate cross of an Asian Leopard Cat with a black Tomcat. Although several other breeders contributed to the Bengal breed, Mill is widely considered as the originator, as she was able to successfully continue the breed past the fourth generation (F4). The breed was officially recognized by The International Cat Association (TICA) in 1983.

From glittered, spotted snow leopards, to jet-black panthers, the Bengal breed really does have it all. With all the exotic blends and variations in color and patterns, it is a magnificent breed that truly has something for everyone.

Looking for the right gear for your Bengal? Check out these posts:

The long-haired cousin to the ever-popular Abyssinian, Somali cats have a fascinating history and unknown origin. With a genetic lineage…
The category

If you love to use essential oils for yourself, then you may like the idea of using them for your…
The category

This naturally occurring breed existed in Turkey as long ago as the 15th century, and they’re still considered a national…