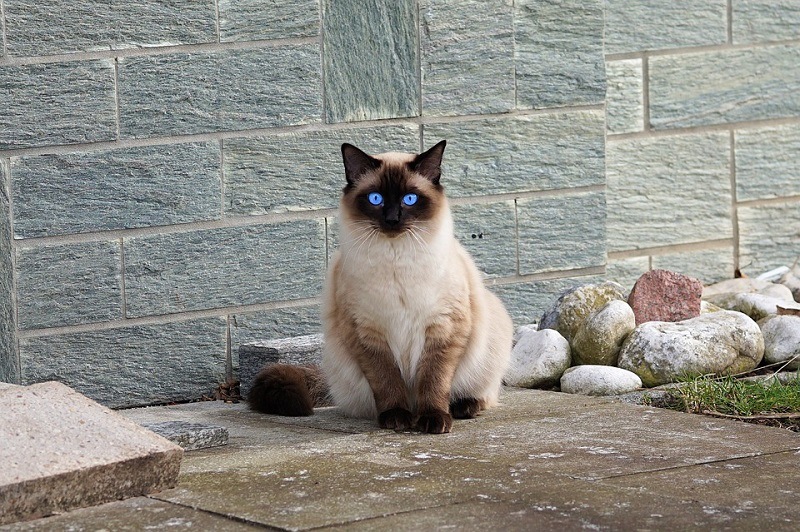 Cats make wonderful pets, but they don’t have the greatest reputation when it comes to empathy. Instead, they’re generally considered to be self-centered creatures that occasionally allow you to bask in their glory.

However, that’s not the case with all cats. There are a few breeds that make excellent emotional support animals, as they seem to be able to intuitively know when you need companionship.

Many of the breeds on this list can make excellent certified service animals (CSAs), but they’ll still be wonderful little therapists even if you just keep them as a pet.

There’s a reason that Siamese cats are often referred to as “the dogs of the cat world.” While they retain most of the wonderful qualities that make cats great, they’re also extremely loyal and loving. Many have been taught to play games like fetch, and some owners even enjoy putting a leash on them and taking them for walks.

Be advised, however, that they often choose one or two family members as their favorites, so if you have a large brood in your house, you run the risk of getting left out. If you live alone, though, prepare to have a cat that sticks to you like Velcro.

American Shorthairs are extremely popular and for good reason: They’re smart and even-tempered and can be extremely affectionate. They’re not quite as clingy as Siamese, but they have no problem sitting in your lap and listening to your troubles (in exchange for pettings, of course).

They’re good with kids as well, making them an excellent pet for children who need an emotional support animal. They’ll even get along with the dog, so don’t be surprised if your American Shorthair quickly becomes the most in-demand member of the family.

Owning a Persian will give you the “classic cat” experience in many ways. They’ll meet you at the door with meows, they’ll rattle you with their powerful purr motor, and they’ll lavish you with love whenever it suits them — regardless of what you were doing at the time.

They tend to be calm and affectionate cats, so they’re content to sit in your lap and soak up all the physical contact that you can offer. Just be aware that they require a great deal of grooming, so you’ll have to brush them almost as much as you pet them.

A relatively new breed, the American Bobtail does everything on their own terms. That means that when they want affection, they’ll practically drown you with love. However, it also means that when they’ve had enough, they’ve genuinely had enough — and it doesn’t matter how you feel about the situation.

If you’re fine with a cat who’ll run hot and cold, the American Bobtail’s affectionate phases will likely more than make up for the times that they give you the cold shoulder.

Ragdolls get their name from the way that they go limp in your arms when picked up. They’re the perfect breed for carrying around the house, so you can get emotional support regardless of which room you need to be in at the time.

They’re fantastic for giving you a shoulder to cry on, but they can’t really turn their affectionate nature off, so don’t be surprised if they’re constantly following you and demanding more love.

The Manx doesn’t have a tail, so they’re not able to express emotions through body language as effectively as some other breeds. However, they’re quite playful and loving, so you don’t need the extra appendage to know how they’re feeling at any given moment.

However, like the American Shorthair, the Manx is prone to playing favorites. They might choose a single family member to focus all their attention on, causing everyone else to feel left out. As long as you’re the family member that they choose, though, this could be seen as more of a feature than a bug.

Abyssinians are one of the oldest breeds in existence, as they were treasured and esteemed in cultures as far back as ancient Egypt. Abyssinians are so dependent on love and affection that you might feel like an emotional support animal for them rather than the other way around.

These cats are extremely attached to their humans, and they need a great deal of attention and playtime every day. If you have a strong desire to feel wanted, the Abyssinian will make you feel like you’re their entire world — because you are.

Bengals are one of the larger cat breeds, and they’ll spend most of their time trying to cajole you into playing with them. They’ve even been known to play fetch with their owners.

Naturally curious, the Bengal loves to explore, so they’re a great companion to take with you if you need emotional support outside your home. Be aware, though, that they love to chill out on the highest platform available to them, so they’re not likely to be as cuddly as some of the other breeds on this list.

Another large breed, Maine Coons are big and fluffy, so shoving your face into their fur is just about the best stress reliever known to man. They’re affectionate and easy to train, so you can teach them to do just about anything, including going on walks or playing fetch.

Most impressively, though, Maine Coons often develop an ability to read their owner’s mood. This is a cat that will seek you out when you’re feeling blue, rather than waiting for you to come to them (and yes, they’ll expect a treat or two for their effort).

The hairless Sphynx loves to be close to you for one simple reason: You’re warm. However, you can tell yourself it’s because they love you, if that makes you feel better.

Regardless of the reason, the fact is that a Sphynx will spend most of their time trying to climb into your lap and get your attention by any means necessary. If you’re ever breaking down in a sobbing fit on the couch, you shouldn’t be surprised to find them snuggling up to your chin mid-cry.

Russian Blues are quite sensitive themselves, so they know what it’s like to feel sad or overwhelmed. These cats aren’t in-your-face, preferring to keep quietly to themselves for the most part, but they can always be counted on when you need them most.

They’re great athletes, with incredible climbing skills, but their physical characteristics take a backseat to their emotional intelligence. Just be aware that they’re incredible hunters, so if you have a pet hamster, they may end up consoling you after being the reason that you’re crying in the first place.

It’s almost impossible to stop yourself from picking up an Exotic Shorthair and squeezing it like a stuffed animal. Known for their big eyes and flat faces, these cats are some of the most adorable animals on the planet, and they behave like their Persian cousins in many ways.

These cats are codependent, and they don’t like being left alone for long. That’s fantastic if you need a fuzzy companion by your side 24/7, but it can get overbearing for some owners. When you need a shoulder to cry on, though, the Exotic Shorthair is tough to beat.

If you often find yourself in need of emotional support, the cat breeds on this list can come through when the chips are down. They may not be as boisterous or demanding as a dog, but they can offer just as much of a sympathetic ear when you need it.

We’re not advocating getting a cat over seeking out professional help, of course, but we do think that even the best therapy is likely to be more effective if you have a snuggly cat to come home to.