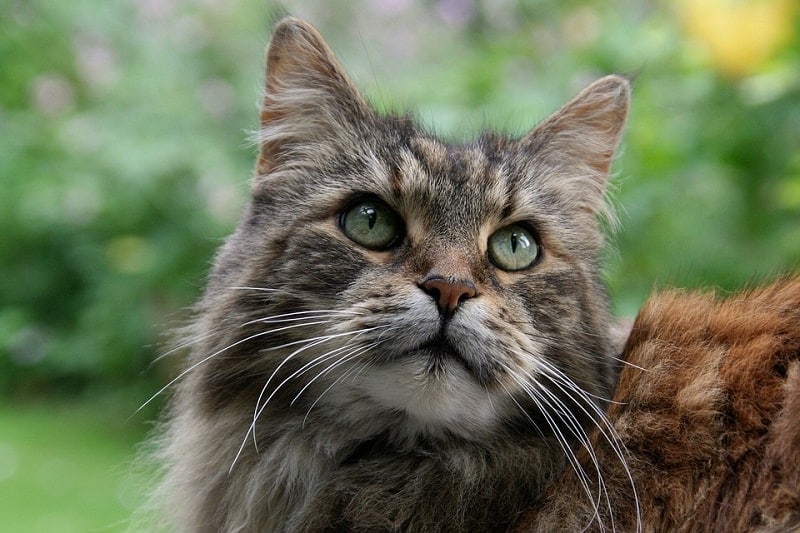 If you have children in your home and you’re thinking about getting a cat for a pet, it’s natural to wonder which breeds are safe to have around children. The good news is that most cats will not harm a child, but some may be a little more friendly than others.

We’ve searched the internet for the best cat breeds for kids and families, and we’ve compiled a list of 18 that we feel are better than the rest.

The Abyssinian is a short-haired cat with a lean body. It’s very curious and tends to follow family members around the house, which can be quite amusing to small children. It enjoys the attention and earns the nickname “clown of the cat world.”

The Birman cat is also known as the Sacred Cat of Burma. It is a long-haired cat with deep blue eyes and a silky color-pointed coat. A color point pattern is a form of albinism that only allows color to show on the body’s cool spots. Most of the cat’s body is white, but the face, ears, and tail have color. Birman cats are very fluffy, and their deep blue eyes can mesmerize a small child.

The Burmese cat is a relatively new breed whose origins trace back to a single cat that came to America in 1930 and mixed with a Siamese. Burmese cats are small but heavy, often described as a silky brick. It’s extremely playful and maintains that playfulness well until its adult years. It forms strong bonds with humans and can learn many tricks, including fetch.

The Cornish Rex is a hairless breed, covered with a fine layer of down that can be straight or curly. It enjoys sitting on a family member’s lap and will spend most of its time there. It’s extremely friendly and not the least bit aggressive. Children often enjoy snuggling up to it to help keep it warm.

The Devon Rex is an intelligent breed with a very short coat like the Cornish Rex. It’s a large breed often described as active, mischievous, and playful. It likes to hide behind walls until you by and jumps out at you, causing small kids to scream, but they enjoy it once they learn the game.

The exotic shorthair is instantly recognizable by its pushed-in nose and roundhead. Its huge head is a favorite of children, and its relaxed disposition makes it the perfect companion for adults. You can find Exotic Shorthairs with long hair as well, and neither shed much.

The Himalayan cat is like the Persian but with a color point coat and deep blue eyes. It is hard for any child to resist petting its fluffy fur, and it loves the attention, often rolling on its back so you can rub its belly. It’s also extremely social and loves to come out to visit with the company.

The Japanese Bobtail has a unique short tail that resembles a rabbit. It’s very affectionate and communicates with soft, chirping noises. It has plenty of energy and likes to play games, and it is one of the easiest to train of all cat breeds.

The Maine Coone cat originates from Maine and is the largest of all cat breeds. Children are often impressed with their size and thick fur, and the cat is very friendly, often referred to as a gentle giant. It likes to follow you around the house relentlessly, and even if you close the door, it will sit outside for hours.

The Manx cat is another breed without a tail. Unlike the Japanese Bobtail, the Manx tail can vary in length from short to non-existent. It’s a social breed that becomes extremely attached to humans. They are quite passive and sleep for many hours per day.

The Ragamuffin is a very attractive cat with thick fur. Its friendly reputation is legendary, and children can’t help but try to hug and pet them. It’s available in a wide range of colors, and though it enjoys playing, it is one of the laziest cat breeds.

The Ragdoll is a large muscular cat with thick fur that features the color point pattern. A single breeder developed it in the 1960s, and it’s one of the most docile cat breeds. It enjoys sleeping all day and will roll over and let you rub its belly if it means you’ll let it go back to sleep.

The Scottish Fold is a cat breed whose ears fold forward due to a genetic condition that affects the cartilage. It has other names like the Highland Fold and the Longhair Fold and is popular because of its unusually loving reputation.

The Selkirk Rex has an unusually fuzzy and curly coat that looks and feels like a teddy bear. It doesn’t mind the attention and will often bump you with its head for more. It’s very quiet and gentle and enjoys sitting on the laps of family members.

The Siamese cat is an ancient breed with a highly recognizable slender body and apple-shaped head. The coat often has the color point pattern, and it has blue eyes, which distinguish it from the Exotic Shorthair. Siamese cats are social, affectionate, and intelligent, making them a popular family pet for hundreds of years.

The Siberian cat is another ancient breed that recently became a formal breed. These cats range from medium to large and have a thick furry coat. Some experts believe the Siberian breed is an ancestor to all long hair cats America available in a wide range of colors, including color point.

The sphynx cat is a hairless breed whose skin is the color its coat would be. These cats often don’t even have whiskers, and their unique appearance can attract or repel children. The Sphinx breed is extremely friendly and often cuddles to stay warm.

We hope you have enjoyed reading over this list friendly cat bridge and have found a few you would like to have in your home. The Scottish Fold, Exotic Shorthair, Maine Coon, and Ragamuffin make excellent first pets for families with children, but there is no bad choice. If we have helped you find your next pet, please share these 18 cat breeds for kids and families on Facebook and Twitter.

Did you know that it can be harmful to bathe your cat too often? It may sound like a carefully…
The category

Cats are and have always been one of the most spoiled animals on the planet. They have been revered by…
The category

Siberian Cat vs. Maine Coon: What’s the Difference? (With Pictures)

If you’re planning on adding a new kitten to your family, then you might be researching to see what breed…