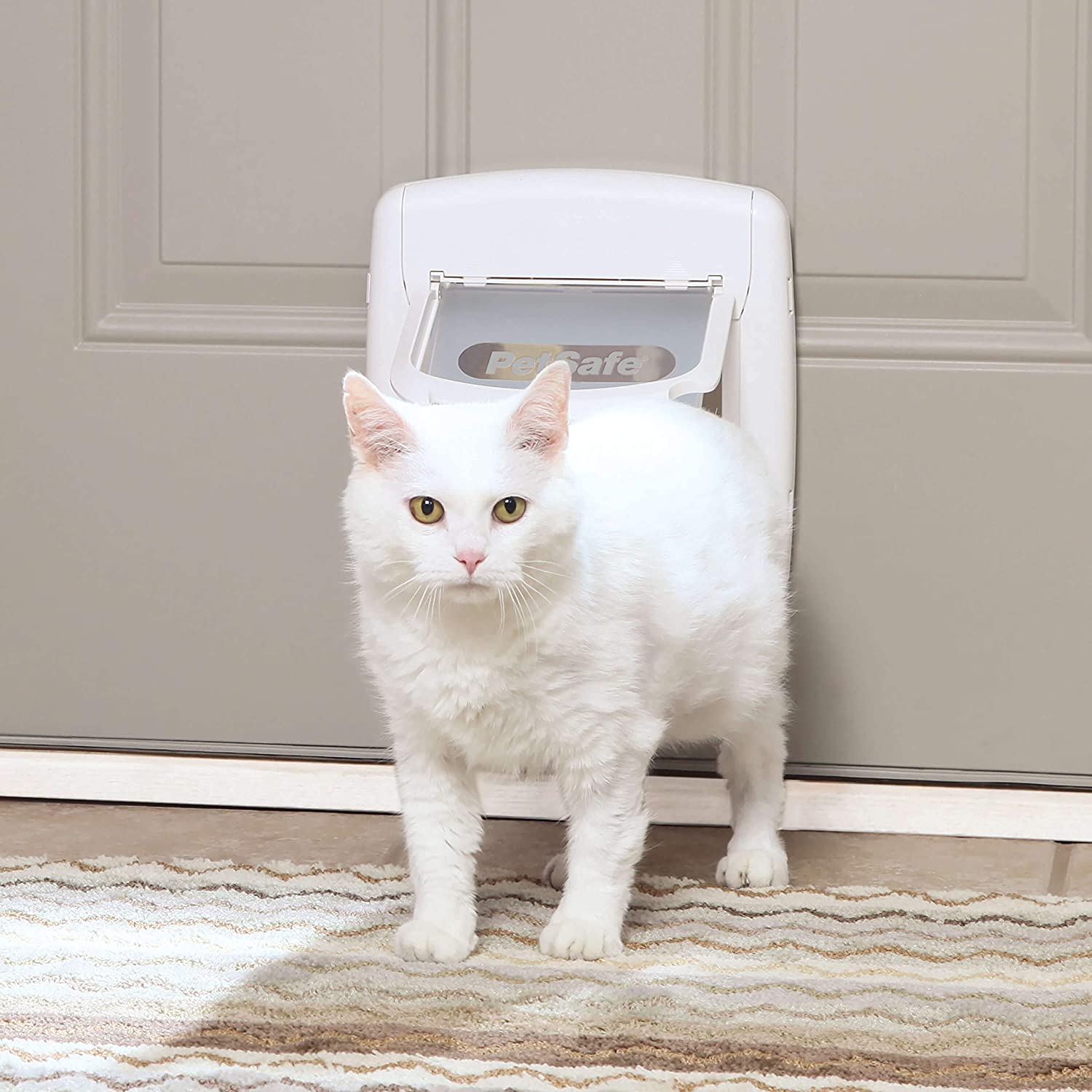 It may not be possible for your cat to be trusted with their own front door key, but a microchipped cat flap is a close alternative. Since most cats are microchipped for safety, a cat flap with its own microchip installed will act as your cat’s personal entrance to your home. A normal cat flap allows your cat easy entrance and exit to the house, but unfortunately, it also allows other stray cats and wild animals the same privilege. A microchipped flap will stop other neighborhood felines from getting in your house and fighting with your cat and stop wild animals from stealing their food.

A microchipped flap offers a host of other benefits too, like time-control settings to keep your cat on a curfew and programable features to allow multiple cats access to your home.

While this technology has been around for some time now, the available features and functions are getting more complex, so it can be confusing to find the right one. That’s why we put together this list of in-depth reviews. Hopefully, they will help you narrow down the vast array of available options and find the right microchip cat flap to suit your feline’s unique needs.

A Quick Comparison of Our Favorites 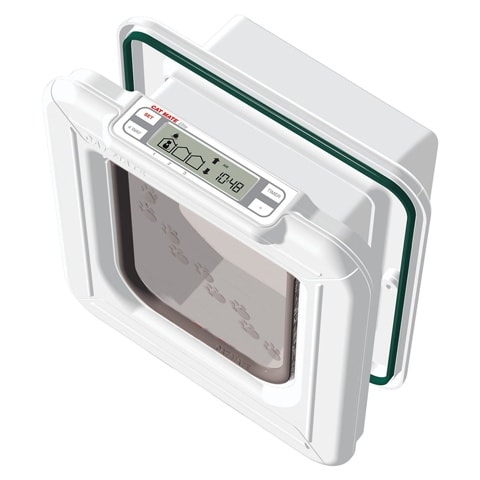 The Cat Mate Elite Super Selective Microchip cat flap is the best overall choice to give your feline the freedom they need and keep strays and other animals out. It uses your cat’s embedded microchip to let them gain access, and if your cat doesn’t yet have a chip, the unit also has a separately sold Cat Mate ID Disc that can be easily installed on their collar. It has an easy-to-use four-way control system that allows you the freedom to choose between unlocked, locked, and in-only or out-only, so you can have full control. The flap also has an LCD screen that indicates the lock status, as well as your cat’s current location and the last time the flap was used. The unit can accommodate up to nine cats, while the extra features can be used for up to three. There is also a useful timer feature, which allows you to program the flap when you want to keep your cats in or out at certain times.

The flap is simply powered by 4 AA batteries, is weather sealed with a brush-sealed flap, and has a magnetic closure to keep your house protected from the elements. Some users report that this flap can be fairly tricky to program, though, and that the program buttons are difficult to depress. 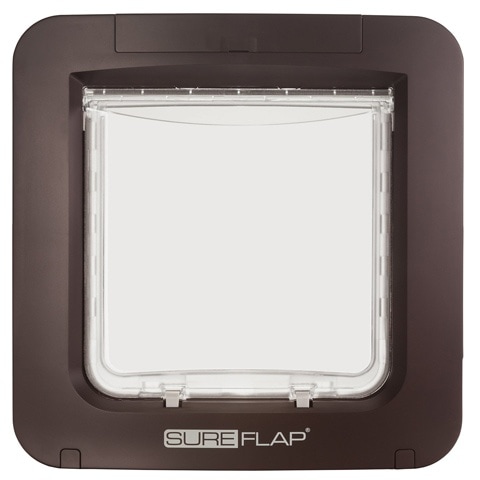 The SureFlap is an affordable yet highly functional cat flap and is the best microchip cat flap for the money. The flap has an easy, one-button program function that is easily set up with your cat’s microchip or the separately sold RFID tag. The flap can be used for up to 32 cats, which is ideal for cat lovers with multiple pets. This cat flap is completely battery-powered, which negates the need for messy cables and extensions, and makes this unit a breeze to install. The manual four-way lock lets you control when your cat can come in and out, which is a great feature for when you’re away at work or on vacation.

This flap cannot be programmed to remain unlocked, which is a frustrating feature if you are using it for small dogs or kittens. The flap door is also fairly flexible, and the moving lock is short, making it easy for a big cat to open when the unit is locked. The door will then stay open and allow other cats or animals to come in. These minor issues keep this flap from the top position. 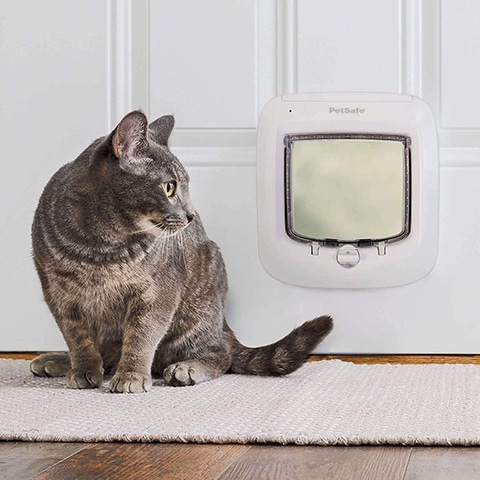 If you are looking for a premium microchip cat flap that is not lacking in features, the PetSafe Interior and Exterior flap is the ideal choice. It is programable for up to 40 cats, which is great for multi-pet households. The four-way locking mechanism can be set to locked, unlocked, exit-only, and entry-only, giving you complete control of your feline’s movements. It has tough weather stripping and two insulted locking points to keep out rain and wind, and the battery-powered operation will negate the use for messy power cords while giving you an estimated 12 months of battery life. It can be used with your cat’s unique microchip or with a separately sold RFID collar chip.

This flap is fairly noisy and makes a clicking sound whenever the lock is disengaged, which can scare your cat away from using it. Some users report their cats picking the lock by sliding their paws underneath when the flap is set to in-only mode. This can be potentially dangerous for your cat, as they can easily get a leg or tail stuck inside the door. These minor flaws keep this flap from the top two positions. 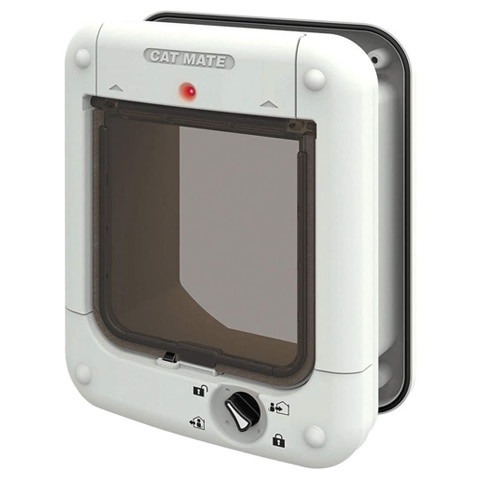 This microchip cat flap from Cat Mate will work with your cat’s implanted RFID chip or with a collar-tag chip. It is quick and simple to program, can be used for up to 30 different cats, and has a four-way rotary lock to give you complete control of your cat’s movements. The brush-sealed flap has a strong magnetic closure that is designed to keep out wind and rain. It is also made from tough polymer and is transparent so your cat can see in and out. The AA-battery powered operation makes for seamless and easy installation, without any messy cords or extensions, and can last up to 12 months.

It’s important to note that changing the batteries on this device will result in you losing your cat’s unique ID information, so you’ll need to reprogram it. The flap is also loud and noisy, which may scare some cats into not using it. Several users report that the flap only intermittently worked with their cat’s chip, sometimes having to stay inside the tunnel for several seconds before it was finally triggered. 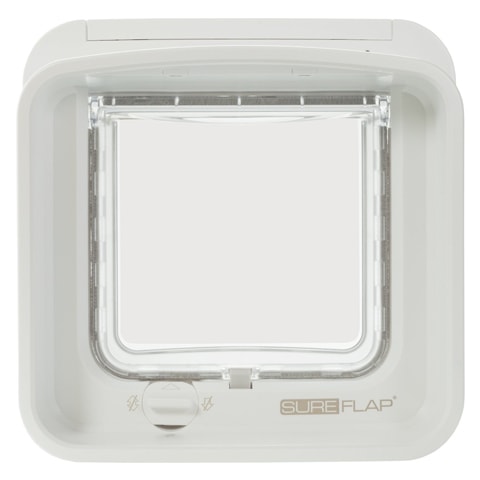 This DualScan microchip cat flap from SureFlap will work with most common microchips and uses dual-scan technology to make sure the flap opens quickly and reliably for your feline friend. It can store up to 32 different cats, and the simple one-button function will make setting permissions for your cats quick and easy. It has a four-way manual lock and a central magnet on the door to prevent wind and rain coming into your home. The flap is battery-powered and can last up to 12 months.

This flaps door has a noisy running operation, with loud locking and unlocking clicks that may scare your cats into not using it. Several users report that water can get in through the flap in heavy storms, and a big cat or raccoon can easily overcome the small magnet on the door and force the flap open. It is also has a small-sized tunnel, which will be a struggle for large cats to get through.

A microchip cat flap is a great way to control your cat’s movements and prevent strays or other small animals from entering your house. The premise of a microchip cat flap is simple: The flap will open only when the sensor reads your cat’s implanted RFID (Radio Frequency Identification) chip or a compatible collar-tag chip. This microchip acts like your cat’s personal house key, letting them come and go as they please, and it can be programmed by you, to allow your cat freedom of movement through the flap that you are in full control of. Some units also have built-in timers and programable functions that you can customize for different cats.

There are several features to consider in a microchip cat flap, and the more bells and whistles that the flap has, the more it will cost, but the more functionality it will have too.

Why buy a microchip cat flap?

A microchip cat flap has several benefits over a traditional flap:

While most available cat flaps are large enough to fit most average-sized cats, this is the first box you’ll need to check before buying. If you have large cats, they may not fit through some of the available models.

Most cat flaps are easy to install in wood or PVC doors, but most will require additional parts if you want to install the flap in a window, wall, or metal door. The flap should also be as strong as possible, as cats are clever and determined animals. The lock on the flap door should be strong enough so your cat cannot slip their paw through and force the door open. 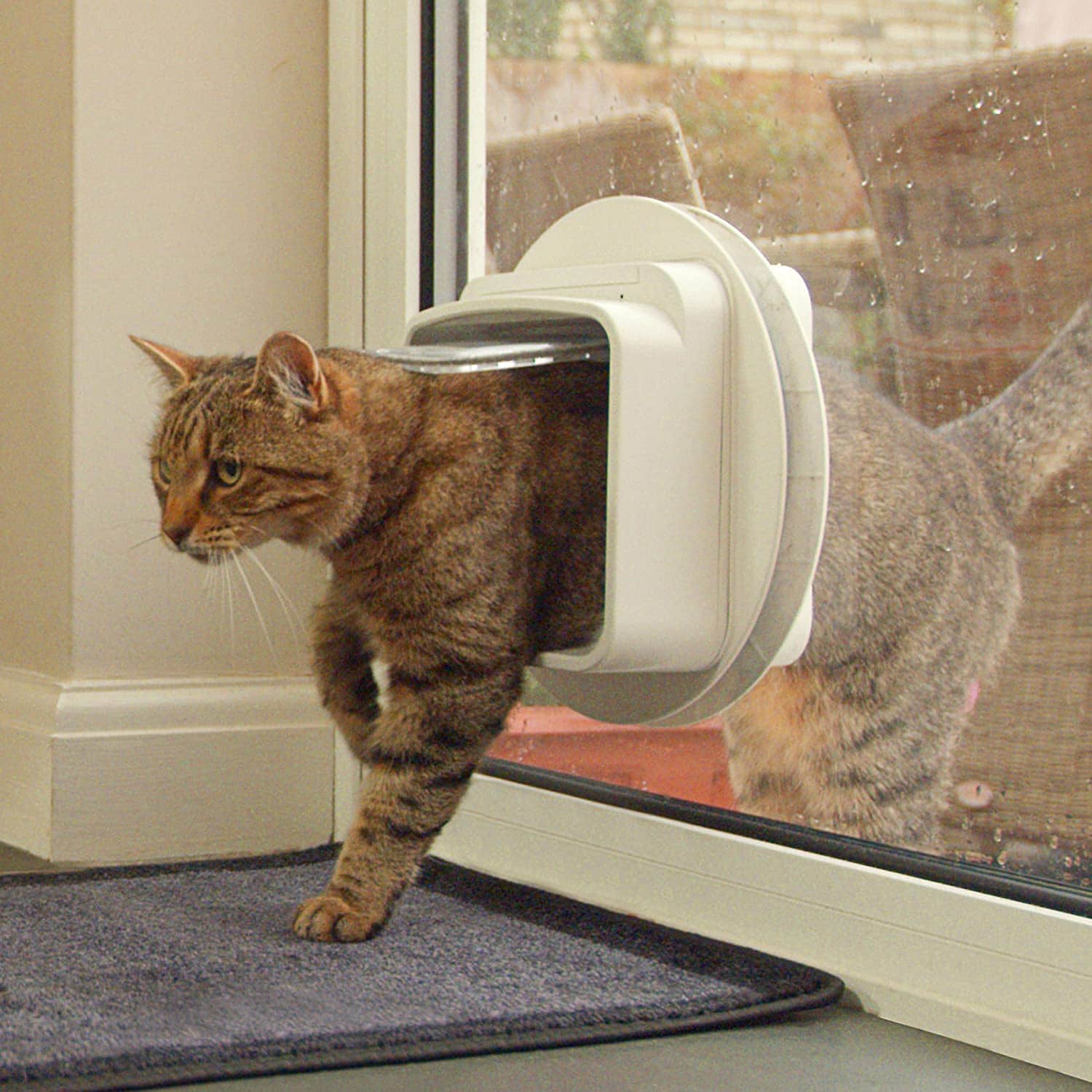 A selective entry function on your microchip cat flap is a given, and all available models will usually have this feature. It will only allow cats who have had their microchip programmed into the flap’s database to enter through the flap.

A selective exit is not on all models of microchip cat flaps but is a useful feature if you have more than one cat. It allows you to program which of your cats can go out, which is perfect if you also have kittens or older cats that need to be kept inside.

Most microchip cat flaps run on battery power and can usually last up to a year before the batteries need to be replaced. Bear in mind that some models will reset when you change out the batteries and will need to be reprogrammed with your cat’s chip again. Mains-powered flaps will mitigate this problem, as well as prevent the chances of batteries on the flap running out while you are not around. These models are far more complicated to install, though, and will also have messy power supply cords that you’ll need to conceal.

Most cats will need to be trained to use the flap, and this should be done slowly to avoid scaring them off. Another important consideration is thus how much noise the flap makes. Some flaps have a loud locking/unlocking mechanism, and this can easily scare your cats off from using them.

More expensive microchip cat flaps have unique additional features that are worth considering, including:

The best microchip cat flap overall is the Cat Mate Elite Super Selective Microchip Cat Flap. With its easy-to-use four-way control system, lock-status LCD screen, and useful timer feature, this unit has everything you could want from microchip cat flap.

The best microchip cat flap for the money is the SureFlap. It has a simple one-button program function, can be used for up to 32 cats, is completely battery-powered, and is a breeze to install. This is the ideal choice of cat flap if you are on a budget.