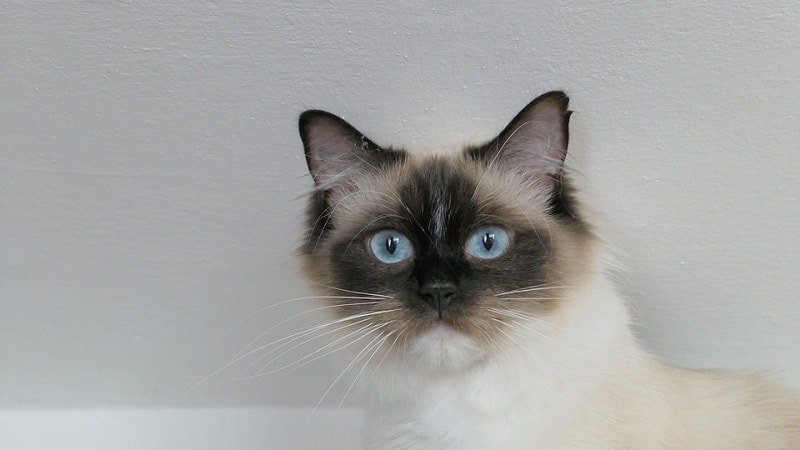 Can Ragdolls be black? It is interesting that this issue still raises a lot of controversy in the Ragdoll community. To answer the question, yes, there is such a thing as a black Ragdoll. However, the black and other solid-colored Ragdolls are still struggling to gain legitimacy, especially in official pet competitions.

Black ragdolls are not new. They have been around since the Ragdoll breed entered the scene in the 1960s and are still sold by breeders today.

While solid Ragdolls may lack the traditional Ragdoll points (mask, ears, eyes, legs, and tails), they have everything you would expect in a Ragdoll, from the large size to the silky coat texture and the docile personality. But what is it that sets the Ragdoll cat apart, and should you expect any difference with the black cuties? Read on to find out.

Black Ragdoll Cat – Before You Buy…

The price of a black Ragdoll cat will vary depending on the quality of the kitten and whether you’re buying breeding rights or not. But generally, you should expect to pay between $450 and $2,500 for a healthy kitten. This price will also depend on the breeder since they have to factor in costs incurred when raising the kittens such as veterinary fees.

Although many breeders are now selling more black and solid-colored Ragdolls alongside their pointed counterparts, you cannot show your black Ragdoll in official competitions yet. According to the International Cat Association, you can only show non-pointed Ragdolls as pets and not in any other association.

Although black Ragdolls don’t have the traditional points, they possess the gene. If you breed a traditional Ragdoll with a black one, you will produce both black and pointed kittens. Even if you breed two black Ragdolls, there is a likelihood that one of the kittens will be pointed.

3. The Name Ragdoll is Derived from the Cat’s Behavior

The name Ragdoll comes from the cat’s tendency to relax and go limp when picked up. If you pick a Ragdoll up, it will collapse into your arms like a ragdoll and allow you to cuddle them, something they love and enjoy.

Ragdoll cats are calm, gentle, and sociable. They demonstrate their affection by snuggling in your bed, leaping into your lap every now and then, and following you around the house. Although they are regarded as the most docile cats, they can also be active. They will fetch balls when you throw them and will gladly participate in any family activity. Ragdolls are also well-mannered and easy to live with.

These cats are also very intelligent. Not only are they quick to learn new things, but they are also demonstrably affectionate. They will fall over the moon when you cuddle them and meet you at the door when you get home. They are also able to communicate their food needs quite effectively and are sensitive to their food and sleep schedules. Moreover, they can show lots of emotions, from frustration to happiness and sadness.

A Ragdoll is a good pet to have around if you have a family. They will get along with everybody and will participate in all your fun activities. Whether you want to play dress-up or throw toys for them to catch, these furry friends are very cooperative. They will follow you around the house and will greet people at the door when they arrive. Your children are also safe around them since they rarely extend their claws during playtime.

Thanks to their amiable disposition, a Ragdoll will get along fine with other pets as long as they are cat-friendly. If you have a dog around the house, buying a Ragdoll cat could be the beginning of a beautiful friendship. But remember to socialize them early for the best results.

Things to Know When Owning a Black Ragdoll Cat

Pets require care and attention for proper growth and development. However, different pets will have varying needs and preferences. Here is what you need to know before owning a black Ragdoll cat.

When your black Ragdoll is growing, you are encouraged to feed them a little more to ensure they get all the required nutrients for growth. After the kitten has finished its food, give it a little more until it stops eating. However, you might want to cut back on the food when your Ragdoll is fully grown to prevent obesity. How much you feed it will also depend on the growth rate and its current health. So make sure you discuss the exact amounts with your vet.

Canned food is a better option compared to dry food. While dry food has high levels of grain and other fillers, canned food is a good source of proteins, and a Ragdoll needs high amounts of it to thrive. Vitamins and mineral supplements are not necessary, but the vet may recommend them if your cat has underlying health conditions.

Ragdolls are fairly large cats and can weigh between 15 and 20 pounds. If your cat doesn’t get enough exercise, they are likely to get obese, which can lead to a host of health problems. Since Ragdolls are generally playful, they will be receptive to play and exercise. A game of fetch is a good start since Ragdolls love balls.

Ragdolls are sometimes referred to as “the dogs of the cat world” and it’s not just because of their large size. Apart from being loyal and playful, they are also very intelligent and will pick up new tricks quite fast. The key is to reward them whenever they succeed at doing a trick. Find something they really like and treat them when they follow your commands.

Ragdolls have a thick and extremely soft coat. Brushing the coat at least twice every week will help prevent tangles, mats, and excessive shedding. You should also trim their claws regularly and clean their ears by wiping them gently with a damp cloth. If you keep the coat well-groomed, a full bath is not necessary.

Your black Ragdoll will enjoy this grooming session and will get excited when you brush their coat. Additionally, a grooming session is a perfect opportunity to check if there are any signs of illness. Check the eyes for any form of discharge and examine the ears, paws, teeth, and gums for anything out of the ordinary.

If you buy a Ragdoll from a reputable breeder, they will already have screened the kitten for health issues. But it is also important to screen your pet through their adulthood since some of the health problems will not manifest until later in the cat’s life. Having a good vet at your side is important.

Male Ragdolls tend to grow bigger compared to their female counterparts. So they may require much more room. In terms of personality, it is hard to draw a definitive line between male and female Ragdolls. But the general belief is that males are more relaxed and friendlier than females.

In reality, your Ragdolls personality will largely be shaped by their environment and upbringing and not necessarily their gender. That’s why buying a Ragdoll from a reputable dealer is so important. Proper care and upbringing will positively impact your pet’s personality and behavior. How you treat the cat after buying it is equally as important.

A spotted, black, or any other solid Ragdoll is not different from the traditional Ragdoll. They are also calm, gentle, and sociable. And they make very good pets. However, they may not be the best option if you want to enter your pet into competitions.

Overall, the Ragdoll is a fascinating breed no matter what color or pattern it has. Compared to other cats, it is relatively large and could be more expensive owing to its immense popularity. But if you want a loyal and trusting pet that is affectionate without being needy, a Ragdoll might be just what you need.