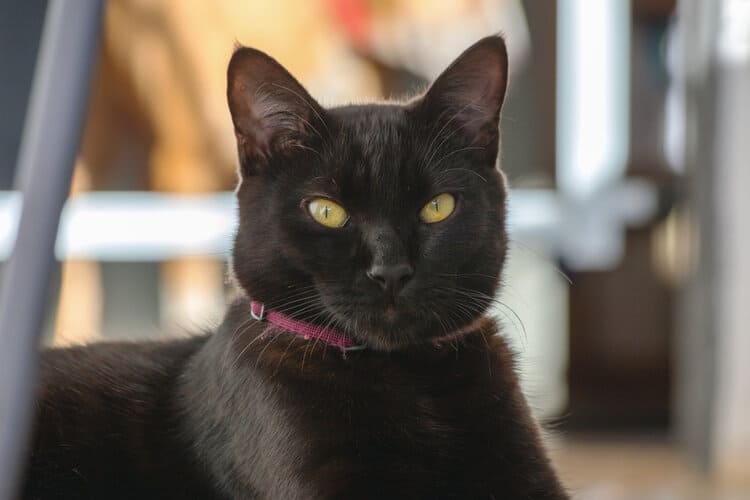 You’re probably no stranger to tabby cats. They are ever plentiful, popular, and peppy kitties that have so much to offer. They are very spirited, spunky, and curious cats with a great sense of adventure and playfulness.

These interesting felines have a rich history, showing up all over the place since the domestication of house cats eons ago. Let’s look at some interesting facts you might not know about the beautiful black tabby cat.

1. Tabby Cats Are Rumored to be a Favorite Familiar of Witches

Have you ever heard of familiars? A familiar is said to be the right hand animal of a witch—one who stands by her. Essentially, it was a demon in animal form that assisted her with magical goings-on.

Cats are among some of the most common familiars you hear of. These days, you might see that black cats are all the rage with witches. But it was initially the black tabby that was the witch favorite—or so the rumors have it.

2. There Are Five Distinctive Patterns of the Black Tabby

Black tabby cats have five distinctive coat patterns, so they cover a lot of ground in terms of looks.

All cats below are considered black tabbies.

3. Black Tabbies Have a Classic M-shape on their Forehead

If you look on the forehead of every single black tabby cat, you will see a classic “M” on their head. They form in four distinct lines, no matter the overall coat pattern. It’s always easy to tell a tabby apart, even if their lines, stripes, or spots are faded on the body.

It happens in all five designs and is the easiest way to tell if you have a ticked tabby or solid-colored cat.

4. The M-Shape Has Many Myths Surrounding It

This “M” shape is the stuff of legends. Some say that it represents the word “mau” of ancient Egypt, which literally translates to “cat.” Others say it was a blessing from Mother Mary to thank the tabby for comforting baby Jesus at his birth. Some say it was about the prophet Mohammed, who loved and respected felines.

Regardless of the legend you hear, cats are always intertwined with some spiritual significance—a common theme for cats across history.

Because of their incredible patterns and tones, black tabbies were named after a silk type from Baghdad. Initially, the word referred to a kind of silk taffeta that had interestingly woven waves.

Over time, the wavy patterns and unique designs of the silk were compared to their unique coat. By the 1700s, the term tabby was directed toward the cats themselves. So, the term evolved over several hundred years.

6. The Tabby Comes from Wild Roots

In nature, their pattern serves the black tabby cats well. Their design is very distinctive, which you may notice is similar to cats in the wild (such as cheetahs, tigers, and other big cats     ).

Their markings help them blend in with their territory to hide from prey, so they don’t see the attack coming. It helps them to remain undercover while they’re prowling for something to catch. It may be one reason why these cats tend to be fabulous hunters.

Tabbies are widely revered for being some of the most social cats that exist. Their temperaments tend to be extremely loyal, friendly, and outgoing. You might find that a      black tabby cat comes running up to you, rubbing up against your legs the first time you meet them.

They love to be around people—even tiny children. They also tend to adapt well to multi-pet households with dogs and other pets. They’re also incredibly playful and enthusiastic—but it’s all in good fun. Black tabbies will formulate relationships and bonds with multiple humans and animals, rather than being so selective.

8. The Black Tabby Coat Turns Up in Many Breeds

Even though the black tabby isn’t a breed in itself, the patterns and colors show up in many purebreds across the spectrum.

You might see a black tabby cat in the following breeds:

But they can exist in any mixed litter if the genetics are right. It’s one of the most common coats and black isn’t the only color. They can be orange, too—which includes stripes and swirls from cream to deep mahogany.

The famous, universal black tabby cat isn’t going anywhere anytime soon. They have been around since the beginning of cat domestication, and they will continue to flourish. We love the black tabby cat for so many reasons, like their rich history, ideal temperament, and beautiful patterns. Hopefully, you come into contact with one (or many) if you haven’t already.

New pet owners may find comfort for their pets by adopting them in pairs. Whether it be siblings, or simply…
The category

What’s more festive or celebratory than a decadent cake? We can’t imagine a birthday or holiday without one and sharing…
The category

Why Does My Cat Drool When I Pet Him? 8 Reasons for This Behavior

Have you ever showered your cat with love and attention only to discover that she’s showered you with saliva? Even…