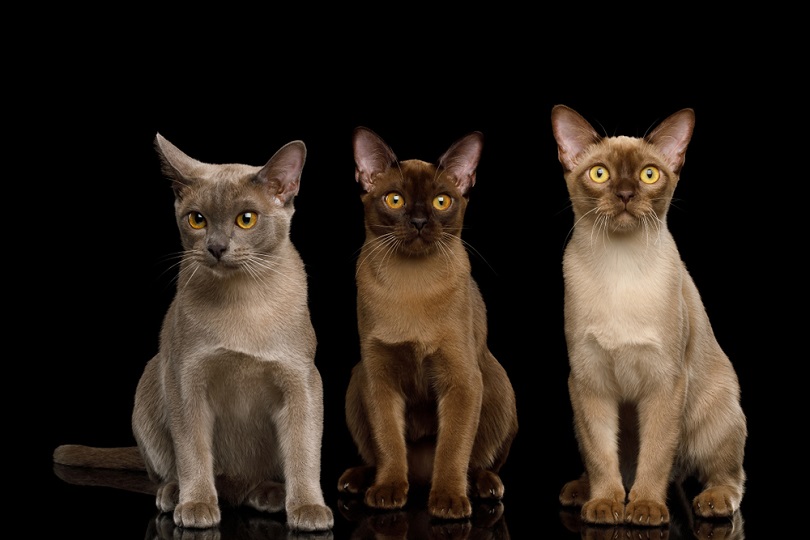 Most cat breeds don’t have coats of just one color. Instead, they feature stripes, markings, and pattern variations that include more than one color. Cats that are just one color are typically black or white. So, it can be tough to find an all-brown cat that is up for adoption or sale. However, there are some cat breeds out there that can be predominately brown in color, so we’ve put together a list of six “brown cat” breeds that might be a perfect companion for your household.

This cat has a short, silky coat that comes in a few different colors, including sable, champagne, and dark brown. The Burmese is a high-energy cat that loves to play and will do just about anything to get attention. They like to show off their jumping skills around the house, especially if there are visitors around to impress.

They are also happy to snuggle up in a lap during their downtime. These cats talk to complain, show their happiness, and communicate in general. They get along well with children and other animals that aren’t too rowdy. This breed doesn’t like being left alone for long periods, so they wouldn’t get along well in a household where everyone is always away and busy.

This cat breed comes in a variety of different colors, such as platinum, cream, blue, and brown, and they sometimes have striped markings of a different color on their heads, legs, and tails. Their hair is short and so fragile that combing it could damage it. The Devon Rex thus requires little grooming and is easy to care for, making them a great option for first-time cat owners.

These cats are described as clowns by many who know them, and they like to entertain their human family members with tricks and antics that include things like jumping on bookshelves and tearing up rolls of toilet paper. They don’t mind being the only cat in the house, but they will share their space with other animals if they are introduced while kittens.

As their name suggests, these cats are born with chocolate-brown coats that are silky and smooth. Some Havana Browns are so dark, they look black at first sight, giving them a spooky look. But they are smart, affectionate, and well-aware of what’s going on around them.

These cats are always looking for attention and affection. If they feel they are being ignored, they can become destructive around the home. Toys should always be available for indoor play, and supervision while outside is advised due to their high prey drive and tendency to chase smaller animals like squirrels.

Most people think of Persians as being white, but this cat breed comes in other colors, including brown.  Although these cats typically have solid-colored coats, some of them end up with small markings on their ears and tail. They have long, luxurious hair that should be brushed daily to keep tangles and mats from developing.

They are playful, needy, and vocal, which tends to make them a dominant member of the household, especially among other animals in the family. They aren’t highly active, but they are always seeking human attention, so they can usually be found lying in someone’s lap if available. They play with toys and kids sometimes, but they prefer to lounge under a window or in a comfortable soft bed.

These cats have large ears that are squared, giving them the shape of triangles or even bats. They have long, slender bodies that are strong and agile, which aids in their curious nature and their tendency to jump and climb. These cats are not afraid to explore dark closets, hidden corners, and gardens outside.

Having interactive toys around to engage with will help keep these cats from tearing up and climbing on the furniture. The Oriental Shorthair doesn’t like to be left alone and prefers to live in a household with other cats to interact with when human family members are not home to keep them company.

While the British Shorthair is known for having striking blue-gray fur, this is not always the case. These cats come in a few different colors, like brown. Their fur is thick, soft, and smooth, which makes them a pleasure to pet and cuddle with. This cat breed has a stocky body and a large, round head. They seem to look serious all the time, but they are extremely lovable and playful throughout most of the day.

Their intelligence makes it possible to teach them tricks and to learn when they should or shouldn’t do things like meow and get on the furniture. These are generally healthy cats that aren’t prone to any genetic health conditions of note. They like spending time with human companions, but they have a sense of independence that makes them somewhat of a loner.

These brown cat breeds are all great human companions. In fact, they were bred to be! Some are more laidback than others, and others have enough energy to keep you busy all day long. Some have long hair, while others barely have any. Hopefully, this list of brown cat breeds helps you choose a new furry family member that meets your needs and expectations as time goes on. Which breed on our list most interested you? We’d love to hear your thoughts in our comments section below.

Can Cats Eat Carrots? What You Need to Know!

Carrots are a common vegetable found on many dinner plates, and you may be wondering if it’s safe to feed…
The category

20 Reasons Why Cats Are Better Than Dogs

If you’re ready to get a new pet but are having trouble deciding between a cat and a dog, we’re…
The category

There’s nothing funnier or more festive than a great meme — especially when there are cats involved. So why not…