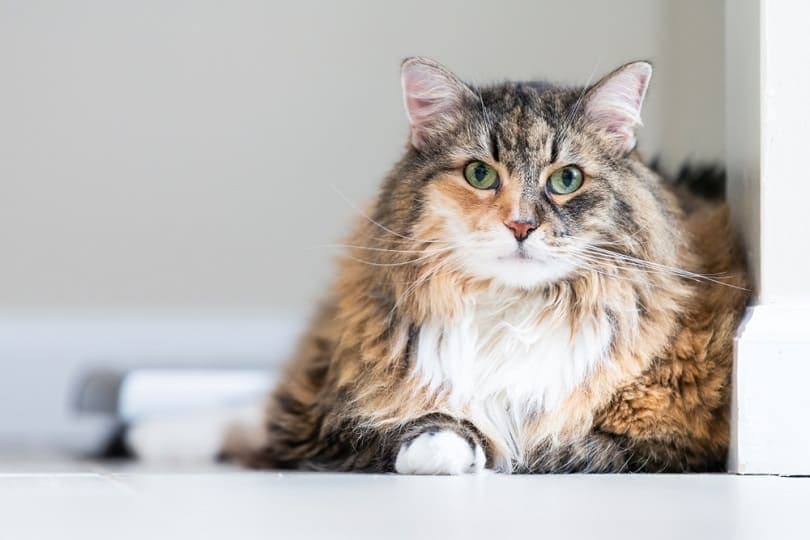 Calico cats are beautiful and unique both in appearance and in personality. These tri-colored cats are considered lucky in some parts of the world, and if anyone has owned one, they are fortunate cat owners indeed. We’ve compiled a list of 17 interesting facts about the Calico cat. After all, these are one of the world’s most colorful and fascinating cats, and learning more about them might convince you to add one to your family.

This also works out to 1 out of 3,000 Calicos are male. For a cat to be a Tortoiseshell or Calico, she must have an XX chromosome. Female cats have the XX chromosome, and males have XY, which is why the Calico is usually female. The rare time you find a male Calico is because of the rare genetic occasion when a cat actually has the 3 chromosomes of XXY. Both XXs must be carrying the Calico chromosome. This is called Klinefelter syndrome, which also occurs in human males.

2. Calico is the color, not the breed.

It is commonly believed that the Calico is a breed of cat, but it’s a name for the tri-color pattern of their coats. It’s actually somewhat random when a Calico kitten is born. It usually occurs when one of the female’s XX chromosomes is black, and the other is orange, which will give you the Tortoiseshell. Some cats will have the black and orange chromosomes but will also have white, which provides us with the Calico.

As already discussed, the male Calico is quite rare and is born with an extra chromosome, also called Klinefelter syndrome in humans. It is even more rare to find a fertile male Calico, with only 1 out of 10,000 that are capable of breeding.

4. Calicos are symbols of luck.

Maneki neko is the well-known Japanese figurine of a Calico cat. It usually has one of its paws raised up; if the right paw is up high, it signifies wealth and good luck, but if the left paw is raised, it should bring more customers to the business. These figurines are commonly found outside of a business (restaurants, shops, hotels, etc.) in order to bring good luck to the owner.

6. Calicos do not have the same personality.

The Calico has a reputation for being somewhat more strong-willed and temperamental than other cats, but many Calicos are also very sweet and affectionate. While many Calico owners have reported owning a fiery-tempered cat, there is no scientific basis behind the claim that all Calicos have an attitude.

7. Calicos are not bred.

The genetics behind how the Calico is created was discussed in the first fact, and it’s these genetics that makes it impossible to actually breed Calicos. If you breed two cats together that have had litters with Calicos before, they won’t necessarily have any Calico kittens in other litters. Calico coloring is essentially an accident that occurs through genetics.

8. Freddie Mercury wrote a song about his Calico.

Freddie Mercury of Queen fame was famous for his singing as well as his love of cats. He owned a number of cats (apparently 10 over his 45-year lifetime), but his favorite cat was a Calico named Delilah. He even wrote and recorded a song dedicated to her that was called, of course, “Delilah”. Most cat owners can relate to some of the lyrics, “You make me smile when I’m just about to cry. You bring me hope, you make me laugh.”

9. A Calico is a stationmaster at a railway line in Japan.

Yontama (which translates to Tama Four) is the fourth cat that has been named the stationmaster at the Kishigawa railway line in the Wakayama prefecture of Japan. It all started with a kitten called Tama that lived at the station in the late 90s that gained lots of love and attention, but when the railway was threatened with closure due to financial difficulties, they named Tama the stationmaster, and her popularity saved the railway.

10. The Calico is a Patronus from Harry Potter.

The “Patronus,” if you’re not well-versed in the Harry Potter world, is essentially a spirit guardian in animal form that wizards use as a defensive charm. The Calico was featured as a type of Patronus charm through Pottermore, J.K. Rowling’s official Harry Potter website.

11. The Calibby is a Calico with Tabby stripes.

When one of the parents of a Calico is a Tabby, you might end up with a Calibby. As long as the 3 colors that make up the Calico are present, but with the addition of stripes, you have yourself a striped Calico.

12. Calico cats are all physically unique.

Just like snowflakes, no two Calicos are alike. They can have stripes in the mix like discussed in the fact above, they can be short or longhaired, and their 3 colors can be in a vast variety of patterns. There are also Dilute Calicos (also called Muted), which are paler versions of the standard Calicos we are all familiar with (white, pale grey, and a light apricot color).

13. The Calico is technically a Tortoiseshell.

14. Germany has a special name for Calicos.

The German name for a cat with the Calico coloring is “Glückskatze,” which translates directly in English to “lucky cat.” Most other countries call the Calico by unique names as well. Lapjeskat translates to “patches cat” in Dutch, and Mikeneko (三毛猫) translates roughly to “three-hair cat.”

15. Calicos are named after fabric.

The original name of “Calico” comes from a plain cotton fabric that was imported into North America from India. The term was first coined in 1578. This fabric was bleached, dyed, and a print or a pattern added. It is usually comprised of two colors, so it seems like naming a patchy cat after a patchy fabric gives the Calico a perfect name.

16. The Calico can be almost any breed.

The U.S. is known to call Calicos “money cats” based on the idea that Calicos are worth a lot of money due to how unpredictable their birth is. Of course, this isn’t true. You can find Calicos at all kinds of prices, and while no one really knows if their pregnant black cat is going to have Calico kittens, they aren’t typically rare.

So, there you have it!  A bunch of fascinating facts about the beautiful and beloved Calico cat. Now that you know more about the Calico, perhaps you should think about adopting one from a shelter or rescue group. She might just bring you some luck.