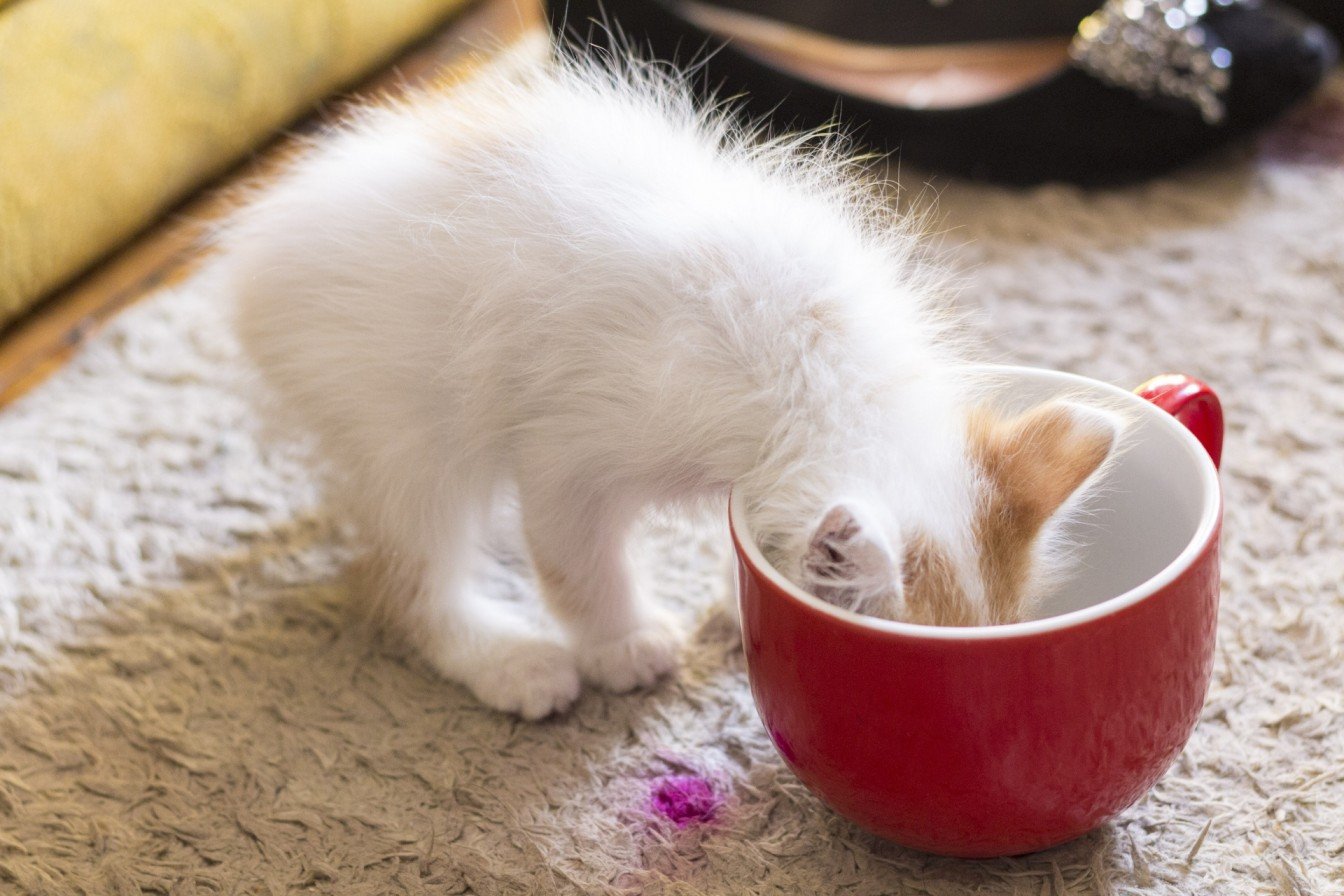 There has been a huge movement away from cow’s milk in recent years toward other lactose-free options, including almond and soymilk. While many of us enjoy the lactose-free benefits of these milk replacements, is almond milk safe for cats? The answer is yes — but in moderation.

Almond milk is superior to cow’s milk and soymilk for cats in that it is lactose-free (most cats are lactose intolerant). Soymilk is made from soy, which is one of the top food allergens in pets. With this in mind, it may seem like almond milk is a great treat to slip in your cat’s saucer every evening, but unfortunately, it is not that simple. In this article, we’ll take a deeper dive into what exactly almond milk is, how it’s produced, its potential health benefits, and of course, whether you should give it to your cat.

As you may have guessed, almond milk is produced from almonds and has a creamy texture and somewhat nutty flavor. It is lactose, saturated fat, and cholesterol free and can come sweetened, unsweetened, and in a wide variety of flavors.

The production of pure almond “milk” is fairly simple: The almonds are soaked in water, usually overnight, and then blended with more water in a high-power blender. The milk is then separated from the pulp and ready to drink. In commercial production, however, sweeteners and flavors are often added, and the milk is often pasteurized for longer shelf life.

There are sustainability issues when it comes to growing almonds, as one single glass of almond milk may require around 70 liters of water to produce. This is far more than other popular milk replacements, like soymilk and oat milk, but less than cow’s milk.

In moderation, almond milk is perfectly fine for your cat, but it doesn’t contain any potential health benefits that they aren’t already getting from a healthy diet. Because most cats are lactose intolerant, almond milk is a great substitute for cow’s milk and is less likely to give them the associated stomach issues.

Almond milk is also cholesterol free and has little to no saturated fat content. Manufacturers often add calcium and vitamin D to make it more similar to cow’s milk, but of course, you won’t get these benefits from making it at home. Almond milk is naturally rich in several vitamins and minerals, namely vitamin E, an essential antioxidant that cats need.

The biggest concern in giving your cat almond milk is the extra calories that they’ll get from it. With a healthy diet, your cat should already be getting the optimum nutrition and calories that they need, and any extra calories can quickly lead to obesity. Around 50% of cats in the U.S. are overweight or obese, so you should exercise caution when adding unnecessary calories to your cat’s diet. Most experts agree that cats need around 24-35 calories per pound per day to maintain a healthy weight, and a single small cup of almond milk has between 30 and 60 calories if it’s unsweetened. On average, a house cat weighs around 10 pounds, which would make their ideal daily caloric intake about 300 calories. A small seemingly innocent cup of almond milk can quickly add up.

Giving too much almond milk to your cat can also result in gastrointestinal issues, including cramps and painful gas. There’s also the chance that the almond milk may have added sugar, flavors, and preservatives, none of which are great for your feline.

Although drinking a small amount of almond milk will not do your cat much harm, they should probably stay away from it. Almond milk offers little in the way of nutrients and none that your cat is not already getting from their daily diet. It is also fairly high in calories and may cause obesity, along with stomach issues, if consumed in excess.

Review Summary Introduction Taste of the Wild is a brand of Diamond Pet Food, which is a pet food company…
The category

Plenty of us adore the gorgeous markings and fiery color of a red tabby cat, so whether you already own…
The category

Cats make wonderful pets, but they don’t have the greatest reputation when it comes to empathy. Instead, they’re generally considered…