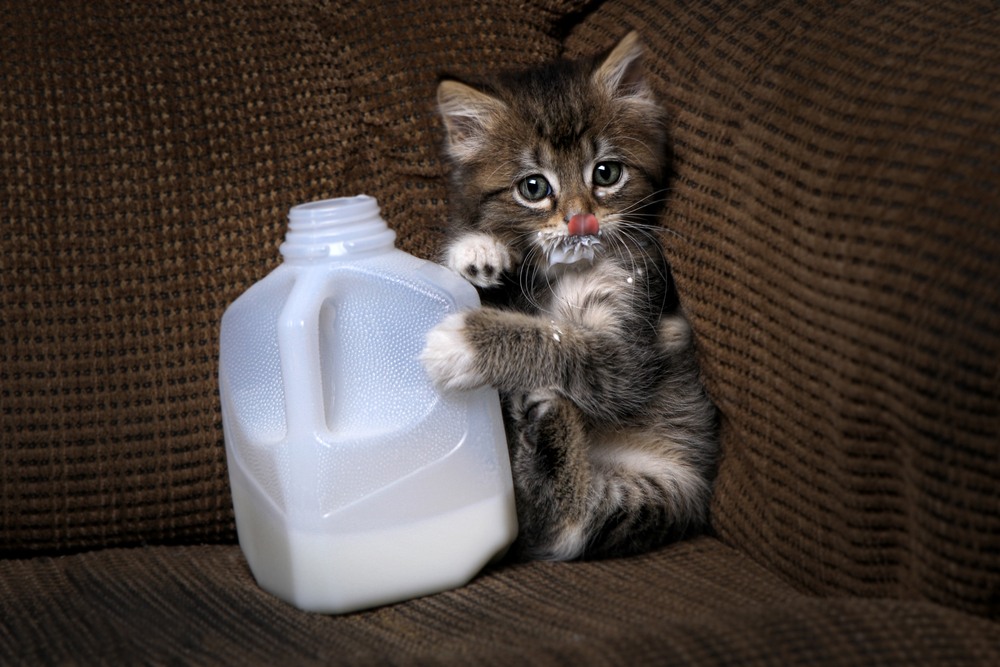 You see everywhere, from movies and tv shows to children’s books. Somehow, the idea that cats should drink milk has become accepted. Many people even think that cats are supposed to drink milk; that it’s an essential part of their diet. The truth is, milk is not good for cats and can actually make them sick.

You might think you’re giving your cat a tasty treat, but in reality, milk is a very unhealthy option for cats that can contribute to multiple health concerns. Let’s take a closer look at the myth that cats should drink milk and start to uncover the truth about milk’s effects on your feline.

Like most mammals, cats cease to produce lactase once they stop weaning. Lactase is an enzyme that allows the body to breakdown a specific sugar found in milk, called lactose. Once your body stops producing it, you can’t digest lactose anymore. This is called lactose intolerance, and most mammals have it because they stopped producing lactase.

While your intentions are good, giving that milk to your cat can cause an upset stomach since they don’t’ have the necessary enzymes to break down the lactose in the milk.

But it gets worse. Since it’s not digested, the lactose passes through the intestinal tract undigested. Here, bacteria cause the undigested sugars to ferment, which produces volatile fatty acids.

That upset stomach can easily result in vomiting and diarrhea, which you should start to see in about 8-12 hours.

Why Else is Milk Bad for Cats?

We already discussed lactose and its effects on felines, but there are other substances in milk that your cat isn’t accustomed to that can also cause problems; albeit, less immediate ones.

In milk, you’ll find high levels of fat. Cats generally eat rather lean diets that are pretty low in fat, so you’ll have to be careful that the extra fat calories don’t cause your cat to gain weight.

Additionally, milk contains lots of sugar. Since cats are obligate carnivores, meaning they get all of their nutritional needs met by consuming other animals, their bodies aren’t adept at digesting carbohydrates, which includes sugars. This is another way that milk can upset your cat’s stomach. Of course, that extra sugar in milk can also contribute to weight gain, just like the excessive fat content.

Does This Apply to All Cats?

Most cats are lactose intolerant, but that doesn’t mean they all are. Some cats can drink milk without experiencing the adverse effects that most felines will have when they drink it. Granted, all cats will be susceptible to the weight gain effects of excessive fat and sugar intake, but not all cats will get sick from drinking milk.

For these cats, small dosages of milk as an occasional treat are ok, though it’s still not recommended. There aren’t any real benefits for your cat, and there are plenty of alternatives that are safer and can provide additional nutritional benefits that milk is lacking.

Alternatives to Cow’s Milk for Cats

If you’re disappointed to find out that milk is no longer a viable treat for your cat, don’t worry; there are plenty of other options to choose from.

You can find several better alternatives in the same dairy family as milk. For instance, yogurt is a much safer option than milk. Since yogurt is cultured, it contains microorganisms that will have digested some of the lactose, reducing the total lactose content. Plus, yogurt is full of probiotics to aid your cat’s digestion. Try giving your cat a spoonful to see how they react.

If you’re set on giving your cat milk, you can try a milk that doesn’t come from cows. There are plenty of cat-specific alternatives, such as this CatSip Real Milk Liquid Cat & Kittens Treat from PetAg. It’s low in fat and 99% lactose-free, making it a much healthier alternative to cow’s milk. Plus, it’s got a flavor cats love that keeps them coming back for more. And to top it off, it’s loaded with beneficial nutrients such as taurine that supports eye and heart health.

Though you’ve probably seen cats being fed milk as a treat many times, you now understand that it’s not a good treat for cats and it can actually be detrimental to their health. Cow’s milk can cause weight gain in cats because of the excessive levels of fat and sugar. Worse, it will upset many cats’ stomachs because of the lactose it contains, which most cats are intolerant of.

In the end, there are several alternatives available like yogurt or cat’s milk that will make a much healthier treat for your feline. We’d recommend these alternatives as a safer way to show your cat you care.

With a curly coat of silky locks and a friendly demeanor, the German Rex is a feline that any cat-lover…
The category

The Toyger is a hybrid breed, a combination of domestic shorthair tabby cats and a Bengal cat. If you’ve ever…
The category

20 Reasons Why Cats Are Better Than Dogs

If you’re ready to get a new pet but are having trouble deciding between a cat and a dog, we’re…