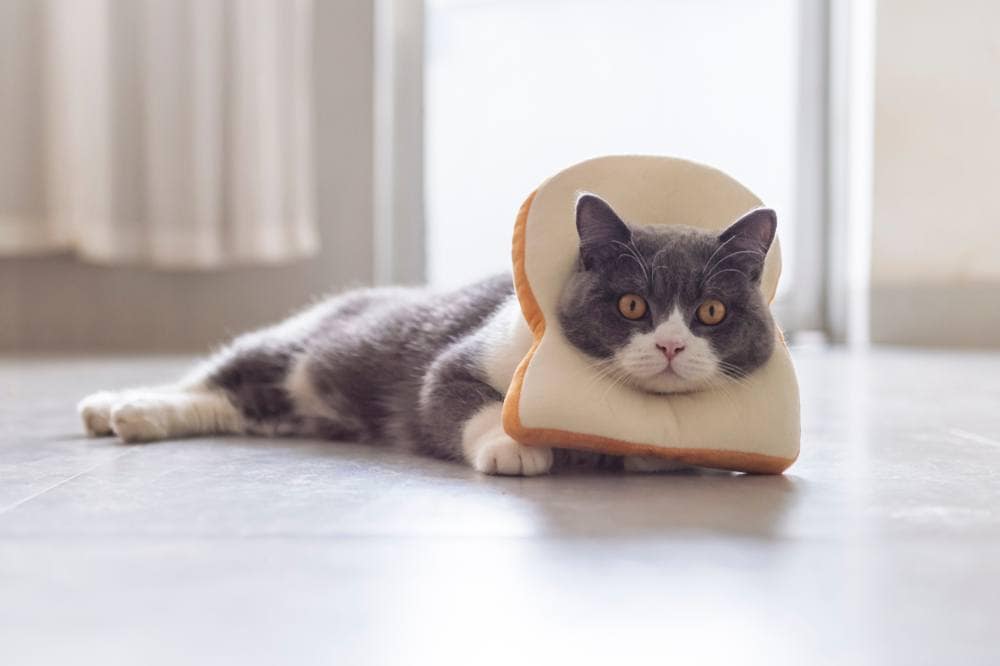 Can cats eat bread? The answer is split on this one, as it actually comes down to what form the bread is in.

As a small treat, cats can eat plain bread that has been baked, however, we would not recommend it forming a large part of their diet, or of feeding too much in one go.

Some also like to dip bread in sauces or feed bread coated in flavored spreads such as jelly or peanut butter. This too is ill-advised.

Bread dough on the other hand is outright dangerous for your cat. On more of that, we will go into below.

Will Cats Benefit from Eating Bread?

There are actually no real health benefits for your cat after eating baked bread. Brown bread is generally higher in fiber, allowing for a greater bowel movement, however, this effect is minimal within felines.

There is no great nutritional benefit of feeding your cat bread.

The Risks of Feeding Bread to Cats

Store-bought sliced bread is actually high in preservatives, that’s how it can stay ‘fresh’ for so damn long.
Sliced bread also contains disproportionately high amounts of salt and sugar – too much of which should be avoided for our cats.

You should only feed them a tiny amount of bread if you choose to do so. And don’t be tricked into thinking healthy bread options, or organic bread is any better. The high salt and sugar counts do more harm than good.

Why Cats Should Avoid Bread Dough

So what is the deal with bread dough, and why should cats not eat it? The answer is due to the fact that bread dough would actually rise in your cat’s stomach if it were consumed before being baked.

The warm and moist environment of your cat’s gut would cause the dough to rise, stretching their abdomen and causing extreme pain. The expansion can be severe enough to affect blood flow around the stomach and hinder breathing. All of which are alarming symptoms for both cat and owner.

If that wasn’t a large enough reason not to feed your cat bread dough, you could also (in very rare cases) give your cat mild alcohol poisoning. When yeast ferments, (as it would in the cat’s stomach) it produces alcohol.
Affected cats can show signs of drunkenness, disorientation, and vomiting.

In extreme cases, the result of eating bread dough could see your cat in a coma, experience a seizure, or even kill them.

Bread is just one of those foods that as it provides no real benefit to your cat, it seems pointless to feed them any.

Furthermore, if you bake your own bread and have bread dough lying around the kitchen, make sure it is covered and that your cat can’t get anywhere near it.

If your cat does inadvertently eat some bread dough, you should take them to the veterinary immediately. The symptoms described above will occur very quickly after consumption has taken place. You have been warned.