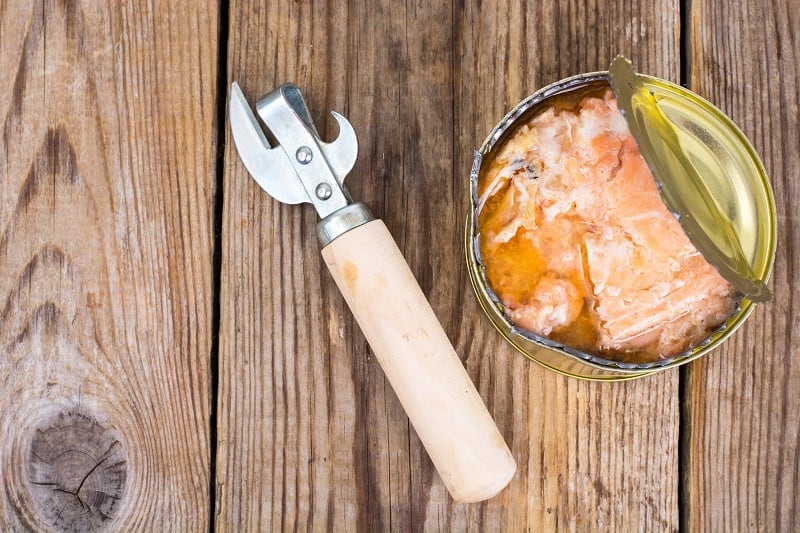 Cats are notorious for their love of fish, so feeding them a bit of canned salmon should be a no-brainer. What could be safer than that, right?

As it turns out, while serving your cat canned salmon likely won’t kill them, there are other health considerations at play that might make you rethink your idea to give your kitten table scraps.

Below, we’ll take an in-depth look at whether canned salmon is okay for your cat, as well as look at times when you should absolutely avoid using it.

Is Canned Salmon Safe for Cats?

Salmon is perfectly safe for cats (and is, in fact, incredibly nutritious), so why would canning it make any difference?

The answer is that canned salmon is designed for human consumption, so the manufacturers dress the meat up with all sorts of additives. These can include salt, preservatives, and more, and your cat doesn’t tolerate any of them particularly well.

In small enough doses, they should not affect your cat. However, if your cat over-indulges, they could get sick, and they could even potentially die if they ingest too much sodium.

And don’t even think about feeding your cat canned salmon exclusively. While your pet will no doubt enjoy that decision, canned salmon lacks in several key nutritional areas, and your cat may become malnourished as a result.

You should be careful about where you leave the cans once they’re open as well. If your cat runs off with an open can of salmon, the sharp corners on the lid of the can could potentially cut or slice them open. Be sure to throw the can away as soon as you’re done with it, and don’t offer your cat too much of what’s inside.

Can Canned Salmon Be Healthy for Cats?

There are things inside salmon that are extremely beneficial for your cat, no matter how the fish is prepared.

The first is the protein content. Salmon is fairly high in protein, so the more your cat eats, the better the nourishment for their muscles. You’d much rather your cat eat some sort of meat than munch on something carb-heavy.

Salmon is also loaded with omega fatty acids. These are powerful antioxidants that are great for fighting disease, slowing the signs of aging, and keeping the internal organs in fine working condition. You can’t have too many omegas, but salmon will try to overload you with them all the same.

However, the more canned salmon you feed your cat, the more they’ll ingest sodium and other undesirable ingredients as well. The nutritional benefits of the fish will quickly become outweighed by the drawbacks of the other ingredients, so you’re better off just offering your cat a little bit as a treat.

Are There Any Other Things I Should Worry About Regarding Salmon?

Yes. While canned salmon isn’t ideal for cats to eat, it’s much better than feeding them raw salmon.

There is a compound called thiaminase that’s found in raw salmon (and other forms of raw fish). Once ingested, this compound will break down the thiamine inside your cat’s body.

Thiamine is an essential B vitamin, and your cat needs all of it they can get, so this is a bad thing. It’s so bad, in fact, that if your cat eats enough thiaminase, they could suffer serious neurological issues as a result.

Also, if you feed your cat any raw fish (which, again, you shouldn’t), you need to be extremely careful to remove the bones first. If your cat accidentally gets a stray fish bone caught in their throat, they could die well before you were able to get them to an emergency vet.

How Should I Feed My Cat Salmon, Then?

While canned and raw salmon aren’t good options for your pet, you should still try to feed them salmon as often as you can. It’s fantastic for cats (and for their owners, come to think of it).

The best way to do that is to grill or steam the fish and prepare it without any salt or other seasonings. Make sure there aren’t any bones hiding out inside and serve it to your cat once it’s cool enough to do so.

So, What’s the Verdict? Is Canned Salmon Safe for Cats?

In moderation, canned salmon won’t kill your cat, but you’re still better off not sharing it with them. It can be extremely high in sodium and other preservatives, and eating a bunch of salt can cause serious health issues for cats.

That doesn’t mean you should force them to swear off salmon entirely, though — far from it. Try to offer them fish as often as you can, but just make sure the fish is safe first.

Whatever you do, try not to think about the fact that Charles Darwin is rolling in his grave because we’re worrying so much about whether it’s safe to feed fish to cats.

Otherwise known as Hemingway or mitten cats, the American Polydactyl displays a unique mutation that makes your cat’s feet even…
The category

6 DIY Cat Fence Ideas You Can Build Today (with Pictures)

Do you want to let your cat go outside but are worried about cars, and dogs, and other cats? Well,…
The category

If you have adopted a polydactyl cat, some would consider both you and your feline quite lucky! This means more…