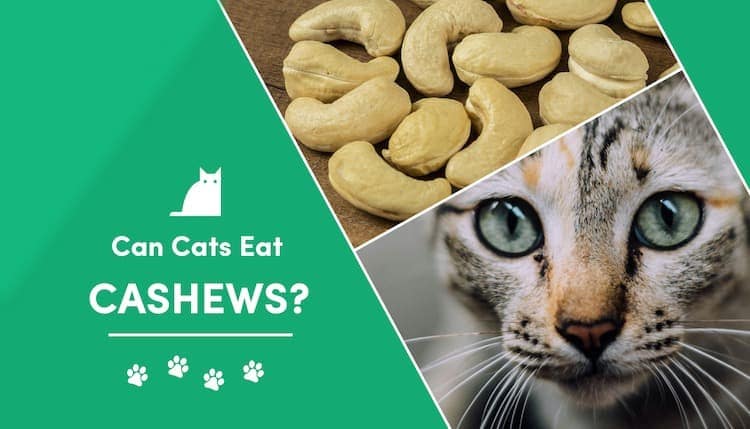 Cashews are small and delicious, the perfect little snack. Humans love them and munch on them all the time. They seem like a great treat for cats too, and cats often seem interested in them. So, is it safe to let your cat try some cashews?

Luckily, when it comes to cashews, there aren’t any serious hazards to worry about. They’re safe to feed to your feline in moderation, but that doesn’t mean that you should. Cashews aren’t very healthy for cats, and there are some things that you need to be aware of if you’re going to feed this tasty human treat to your cat.

What’s Unhealthy About Cashews for Cats?

Even though cashews aren’t toxic for your cat, they’re not a healthy choice to feed them regularly. Cashews are actually pretty unhealthy for your cat, so you should only feed them one or two at a time. Let’s take a look at some of the ways that cashews can have a negative effect on your cat’s health.

In the wild, cats eat a diet that consists of primarily lean meats. They don’t often consume fats, and definitely not in the high amounts you find in cashews.

Since cats don’t often have to digest fats in the wild, their bodies aren’t very inefficient at it. This means that they’ll store more of it, leading to an overweight pet over time.

Obesity is a serious problem that faces our pets as much as us. To help fight it, pets should be fed a lean diet that’s in line with what they would be eating in the wild.

Cats aren’t even meant to eat plants in the wild. They’ll only rarely eat some greens to help with digestive issues. But other than that, their diet is almost entirely meat-based.

This means that cats aren’t good at digesting plant-based foods such as nuts. It can lead to an upset stomach with vomiting as a worst-case scenario, though that would take many cashews.

Too High in Sodium

Even nuts without added salt are very high in sodium. Cats don’t have any natural sodium sources in their diet, so they’d naturally eat very little sodium. For this reason, their bodies are not good at processing high amounts of it.

When a cat eats a high concentration of sodium like a few cashews, it can cause serious dehydration problems easily. Even if you only feed your cat one or two of these nuts, you’ll need to ensure that they drink plenty of water to avoid becoming dehydrated.

If you’re going to feed your cat cashews, make sure to at least get the lowest-sodium cashews that you can find. Some brands make them with no added salt, others offer low-sodium cashews.

This is one you might not think of at first, but it’s one of the most potentially fatal risks that cashews pose for your cats. While a nut like a cashew might be very easy for us to eat, cats don’t have the same kind of teeth as we do.

In the wild, cats don’t eat vegetables, grains, starches, nuts, or anything even similar. They feed only on wild meat sources such as other animals. This means they have teeth that are suited to killing and eating meat, not nuts.

We think of cashews as being very small, but your cat isn’t nearly as large as you are. That little cashew is much larger to a cat, and if it’s a full cashew, it can easily get lodged in your cat’s airway. If this happens, your cat will choke and could potentially die if you don’t take immediate action.

If you’re going to feed your cat cashews anyway, make sure to feed them halves or even smaller pieces so that it’s less of a choking hazard.

If you feed your cat cashews regularly, the worst long-term effect can be pancreatitis. This enlarging of your cat’s pancreas will require advanced medical treatment, which can be quite costly and stressful.

Some symptoms of this include fever, appetite loss, and lethargy. It’s a serious problem that you can’t take care of on your own.

Are Cashews OK for Kittens?

If cashews aren’t toxic for cats and they can be eaten in moderation, then is it ok to give a cashew to a kitten as a little treat?

Cats and kittens are not the same. While cats might not have teeth for chewing nuts, grains, vegetables, or anything except meat, they do still have teeth. Kittens, on the other hand, don’t have any developed teeth that can chew cashews.

Plus, kittens don’t have digestive systems that are developed enough to digest solid food. And that’s assuming the cashew even makes it to their stomach. Kittens are very small and a cashew can present a very real choking hazard.

Even cashew milk can cause an adverse reaction in kittens. Since their digestive systems aren’t prepared for all of the fat, they’ll likely get an upset stomach from cashew milk, though it won’t be fatal. Still, it’s recommended that you avoid feeding kittens any cashew-derived food or drink.

Can I Give My Cat Cashew Milk?

Since cashews aren’t poisonous to cats, it’s ok to give yours a little cashew milk. However, you’ll still need to do so sparingly.

Cashew milk is still very high in fat, which is not great for your cat. They have a hard time digesting it since it’s not a natural part of their diet. Unless you want an unhealthy and obese cat, cashew milk is best fed only as an occasional treat.

That said, this nut milk isn’t going to pose a potential choking hazard the way that whole cashews will. For that reason, cashew milk may be a preferable choice to whole cashews when you want to give your cat a little cashew-flavored treat.

In the end, cashews aren’t healthy for your cat, but they’re not going to cause any problems in small doses. But they can be detrimental to your cat’s health if made a regular part of their diet.

Cashews are very high in fat, which cats have a hard time digesting since there are no high-fat sources that naturally occur in their diet. The sodium content is also very high in cashews. Once again, cats can’t process this well because their natural diet doesn’t contain much sodium.

Finally, cashews can potentially choke your cat, especially if left whole. If feeding solid cashews, be sure to cut them into smaller pieces first. Alternatively, you can use cashew milk instead, which is lactose-free and doesn’t create any risk of choking.

Why Does My Cat Lick My Hand & Fingers So Much?

A dog licking your hand is normal. It’s how they show affection. However, a cat is a different story. These…
The category

Classic Tabby vs. Mackerel Tabby: What’s the Difference? (With Pictures)

Contrary to popular belief, a Tabby is not a breed but actually a type of pattern found in almost all…
The category

Cape-toting, spandex-wearing, life-saving… SUPERHEROS! If you are a fan of the superhero world with the likes of Marvel and DC…