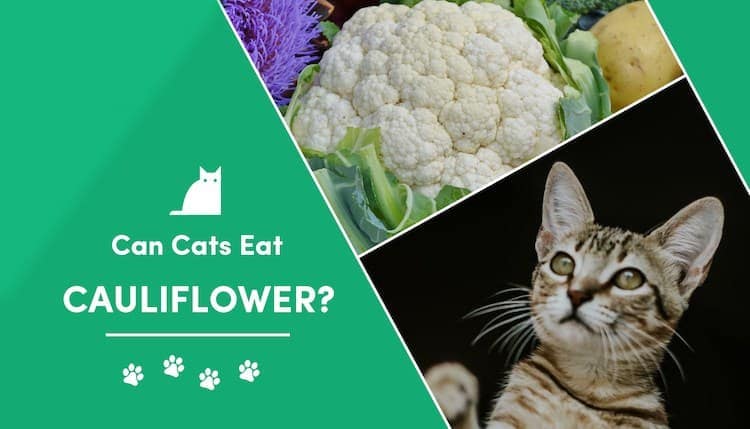 Here’s a bone-chilling mystery: You set a piece of cauliflower down on your plate, turn around for two seconds, and then realize that the cauliflower has disappeared.

Is your house haunted? Did the cauliflower transport into a different dimension? Or is there a demented serial killer hiding somewhere in your home and taunting you by stealing your healthy snacks?

None of these is likely, of course. Also, you already know where the cauliflower went — your cat stole it!

But now you have a scarier question to deal with: Is it safe for your cat to eat cauliflower?

Yes, Cauliflower is Safe for Cats!

The good news is that cauliflower is completely non-toxic for cats, so you don’t have to worry about it killing them. That’s not to say that you don’t have cause for concern, though.

Eating too much cauliflower can wreak havoc on your cat’s digestive system, leading to impressive litter box disasters.

This is especially true with raw cauliflower, so if you must feed it to your cat, be sure to cook it first (we recommend steaming it). Also, be sure to trim the stem and leaves off before serving.

Most cats won’t gorge themselves on cauliflower, so overconsumption shouldn’t be much of an issue.

Is Cauliflower Good for Cats?

Cauliflower doesn’t have quite as impressive a résumé as some other fruits and vegetables do, but it’s not without its charms.

It has many antioxidants that can help reduce inflammation, making it a good choice for animals suffering from joint conditions like arthritis. If you have an older cat, encouraging them to eat cauliflower is a smart idea even if you haven’t noticed them getting creakier.

It’s also full of substances called “glucosinolates,” which are believed to have cancer-fighting properties. If your cat has a tumor, we wouldn’t recommend replacing their oncologist with a trip to the farmer’s market, but it’s nice to know that certain foods can help.

There’s a great deal of fiber in cauliflower, so it can come in handy if your pet has been having trouble in the bathroom. Like we said, though, just be careful not to let them eat too much — unless you want to see what happens when they really conquer their constipation problem.

How Do I Get My Cat to Eat More Cauliflower?

As with most foods, your cat will likely eat it or they won’t. If not, there’s little you can do to convince them otherwise.

You can always try mixing a little diced cauliflower in with their food, but you run the risk of them skipping meals if you do this. Still, it’s your best chance to trick a finicky eater into trying something new.

While cauliflower is good for felines, it’s not so good that you should pull your hair out trying to cram some down your cat’s throat. If they refuse to eat it, just let it go.

What’s the Verdict? Is Cauliflower Safe for Cats?

Cauliflower is not only safe for cats, but it has many important health benefits when consumed, so if you notice your cat batting around a piece, don’t steal it from them.

It can cause digestive issues, though, so we recommend limiting their intake and only feeding them fully-cooked cauliflower without the stems or leaves.

We wouldn’t go so far as to label cauliflower as a “superfood” like cranberries or spinach, but it is good for cats, so try to incorporate some into your pet’s diet if possible.

Just like humans, our cats can suffer from allergies, and it’s no fun for them at all! If you notice…
The category

If you just got a new cat or are looking to change brands from your current treats, you may be…
The category

15 Different Cat Personalities – Which Type Does Your Cat Have?

With kitty personalities, there is no one-size-fits-all. When you see cute, fluffy kittens, you never know just what you’re going…