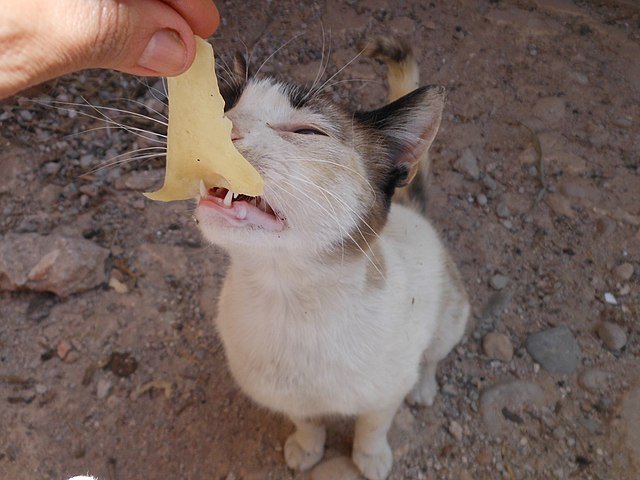 Who doesn’t love a nice slice of cheese slapped across a juicy hamburger? Cheese compliments meat in almost every situation. Since your cat probably salivates over every meat on your plate as much as you do, it’s natural to think they can enjoy cheese the same.

But can cats eat cheese, too? While cheese is entirely non-toxic for cats, you should limit their intake. Some kitties are more sensitive than others and shouldn’t have cheese at all, even in small amounts. Let’s go over why cheese shouldn’t be in your feline’s food bowl every day.

Even though there’s no chance of poisoning your cat with cheese, that doesn’t mean it’s really that good for them to snack on. Of course, if your cat has a small taste, you probably won’t even notice a difference. But more sensitive felines may have a harsher reaction.

Cheese is a dairy product that contains lactose. Cats are naturally lactose-intolerant, which means their liver doesn’t have the enzymes to break down cow’s milk. So, even though it won’t directly harm them, it can be hard on their digestive system. Plus, it can cause a few bathroom problems that you’ll have to clean up later.

Cats are carnivores, so they don’t benefit from anything other than animal-based protein in their diet. Their bodies aren’t designed to digest anything but meat. Animal protein and water are the only things your cat needs to survive. Adding extra fillers too frequently can create unwanted side effects, especially in the long-term.

Other Factors to Keep in Mind

Cheese includes things that may not be so great for your cat, but it is possibly okay to share it with them in moderation. You can decide. To keep things into perspective, you should consider the nutritional content in cheese to make the best decision for your furry pal.

Cheese has a pretty high amount of fat and salt—no matter what kind it is. It’s probably fine for a cat to have a little piece now and again, but regularly eating it can cause obesity, digestive issues, and unwanted side effects.

Salt and fat content will vary from cheese to cheese. Some cheeses like mozzarella and Neufchatel have less fat and sodium. But hard cheeses like sharp cheddar have a much higher level of both. If you’re going to give them either, the softer, lighter cheeses are better.

Salt itself is considered toxic to pets. Ultimately, it dehydrates your cat, causing vomiting, diarrhea, lethargy, and increased thirst—if eaten in excess.

Aside from the unhealthy ingredients, cheese is a good source of protein—which is something your cat needs a lot of in their diet. While this is an upside, they already get an adequate amount of protein from their dry kibble diet.

Sure, kittens need their mother’s milk for survival. Because they need to nurse, a kitten’s body produces a higher amount of the enzyme used for lactose digestion. But this is strictly for feline milk and not for any other animals. Plus, they stop producing as much of the enzyme as they outgrow the weaning stage.

Kittens have precise dietary requirements that they can only get through the mother’s specially-tailored formula. Their bodies are made to digest it. Their mothers produce it specifically for their offspring to develop the way they’re meant to.

So, unless you’re making cheese made of cat’s milk, it’s still not going to have any real nutritional benefit to your cats.

Side Effects of Dairy

If your cat eats cheese—or any dairy product for that matter—it can cause a few gastrointestinal issues. Keep in mind that some cats react differently than others. Some may show no sign of a problem but watch their behavior and bathroom habits after eating it.

If you have an extra-sensitive kitty, you may notice things like:

If your cat has a not-so-good reaction, it’s best to steer clear of cheese altogether. In any case, remember to give them cheese on occasion and not as an everyday snack.

What About Vegan Cheese?

Since vegan cheese is made solely with vegetable-based ingredients, you may assume it would be sufficient for your cat instead. But because cats are carnivores, they don’t benefit from soy or other plant-related additives you’ll find in vegan cheeses.

Vegan cheese won’t do much harm in small portions, but it’s not healthy for them, either. So, the same sentiment extends—a few bites are okay, but they shouldn’t eat a lot in one sitting or every day.

Cheesy Cat Treats: Are They Okay?

If you’re thinking of buying your cat cheesy treats, there are many options on the market. The American Society for the Prevention of Cruelty to Animals (ASPCA) even gives quick homemade treat ideas to satisfy your cheese-loving feline’s appetite.

Still, these treats should only serve as a delicacy for your cat. You shouldn’t offer any treat too often since most cats will overeat and veg out if you let them.

Ultimately, it’s up to you as the owner to determine if cheese is deemed worthy for your kitty. Just remember that your cat’s dietary health should always come first. If something isn’t so beneficial for them, it may be best to skip cheesy treat time altogether. But if you do decide to give in, go light.

If you have any questions or concerns, rely on your veterinarian to give you top-notch advice.

Can Cats Drink Pedialyte? What You Need to Know!

Pedialyte is an oral solution consisting of mostly water with added electrolytes. It is commonly used as a treatment for…
The category

Plenty of us adore the gorgeous markings and fiery color of a red tabby cat, so whether you already own…
The category

Can Cats Eat Honey? Everything You Need to Know!

If you love eating honey yourself, you probably know that it has antibacterial properties and is packed full of antioxidants…