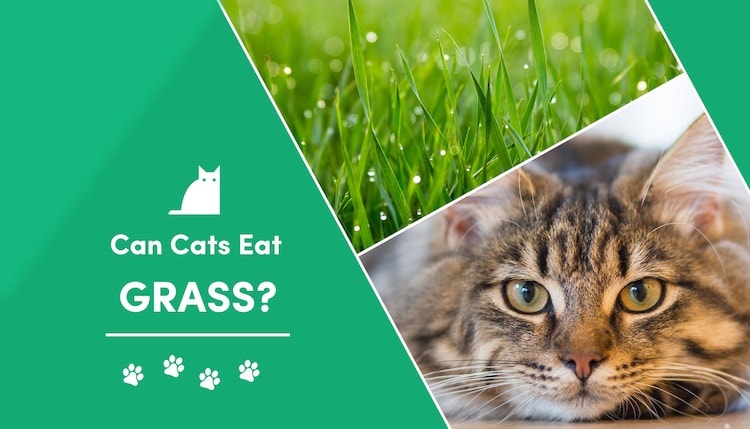 Even though cats are one of the most common household pets, with 29% of Americans owning a feline friend, they still maintain an air of mystery. Whether this is because of their tigress ancestry or if it is merely in the animal’s nature, no one knows.

This means that when your cat does something a little odd, you tend to laugh it off and not pay too much attention. If your cat ever heads outside, one of those things may well occur when you see it munching on grass. You may give it a second thought when, at times, they turn around and throw it straight back up.

Is Grass Safe for Cats? Yes!

Since it is not necessary for them to eat grass anymore, then is it safe for your furry friend to continue eating it? The short answer is yes, according to Pet MD. The grass is not inherently harmful to your cat, and your cats love eating it. They also recognize “everything in moderation” and normally self-regulate their intake of the green.

If you do notice that they are eating large amounts, this may mean that they are trying to cure themselves of some intestinal distress. You may want to take them for a vet check-up.

During the times of the year where chemically treating your lawn or fertilizing is deemed necessary, you may need to put your cat on a schedule or just keep it indoors. Although grass may not be dangerous, the chemicals in the treatment are harmful.

Another consideration is that they may accidentally eat something that is not grass. Numerous weeds and garden plants are somewhat toxic for cats. Although they generally know to avoid these, they may still accidentally take something in.

Why Do Cats Eat Grass?

The mystery has not been entirely unraveled by the scientists of the world, but there are some pretty good theories. There have even been some large-scale experiments done to put these theories to test.

Some of these theories were carried out by surveying 1,000 cat owners that claimed they spent at least 3 hours each day around their pet. Many have speculated that if a cat feels sick, they head to the yard. Grass acts as a natural laxative for many felines since they do not contain the enzymes in their digestive systems to process it. Anymore, that is. So, if they are feeling sick, they go for a grass quick fix.

The theory did not look accurate, according to the study. Even though 71% of the cat owners caught their pet red-pawed, only a quarter of them reported that the cat would follow this by throwing up.

The researchers then speculated that the vomiting was an infrequent reaction to the grass and not the cat’s end game. Scientists from the International Society for Applied Ethology in Bergen, Norway, now speculate that, much like other wild animals, eating on grass aids the digestive system to expel intestinal parasites.

Nowadays, cats are often the royalty of the house and get fed consistent and perhaps expensive food. The likelihood is that they do not have and will never have any parasites. However, it is still ingrained in them to semi-regularly head to the grass patch for a green salad.

How to Stop Cats Eating Grass

If it bothers you or your cat consistently throws up after a backyard indulgence, there are some ways to try and mitigate the amount ingested. As was mentioned earlier, if the lawn has been treated or it may pose a danger, keep the cat inside. If you do not want the feline to eat any plants, consider keeping it indoors permanently.

Another option is to grow your own grass inside just for your cat. There are some specialty retailers that sell kits for cats with several different types to choose  . They are specially designed to be used in the house.

Grasses to Plant for Your Cat

One thing we do know about the relation to cats and their grass is that it contains folic acid, which is an essential vitamin for cats’ systems. A mother cat’s milk contains a good amount of this same compound, and cats seem to naturally know they need it. The grass is effectively the human equivalent of a wheat or oat health smoothie.

Growing your own patch for your cat is easily done. As mentioned above, cat grass kits are available at several specialty realtors, many of which have stores online. Buying from these are not a must either. According to the Humane Society, cat grass mixes are typically made up of oat, barley, rye, and wheat grasses. Making your own blend simply involves buying some seeds of the species at any garden center.

Alternatives to Grass for Cats

There is also catnip available to buy or grow. This is a particular herb that cats go mad for, and they willingly allow to replace their grass feed. There are also scientists that recommend including alfalfa in the grass mix of choice. It has been shown to help prevent and even treat kidney disease for cats.

Oats were mentioned above as well and are a great option, aiding in digestion that serves to calm their intestinal tracts. Just as it is for humans, oats are high in protein and soluble fibers. It also contains several helpful vitamins and minerals, including iron, manganese, zinc, and B vitamins.

A last note on growing indoor plants for your cats: if you have more houseplants than the new pot of grass, it may be difficult for your cat to distinguish between the plants it should and should not eat. Once the catnip or grass mix is grown up enough to be a semi-consistent snack, put it in an area separate from the rest of the houseplants.

It is preferable to place it in an area that the cat already associates with eating, just with enough sunlight and where you remember to water it. This way, with a little TLC, the grass grows green and the cat remains healthy and happy.

Can Cats Eat Seaweed? What You Need to Know!

While it may seem odd to some folks to chomp on that slimy seashore flora, seaweed is actually super tasty…
The category

Growing kittens need the right mix of nutrients, minerals, and vitamins to thrive, and the dry food you choose to…