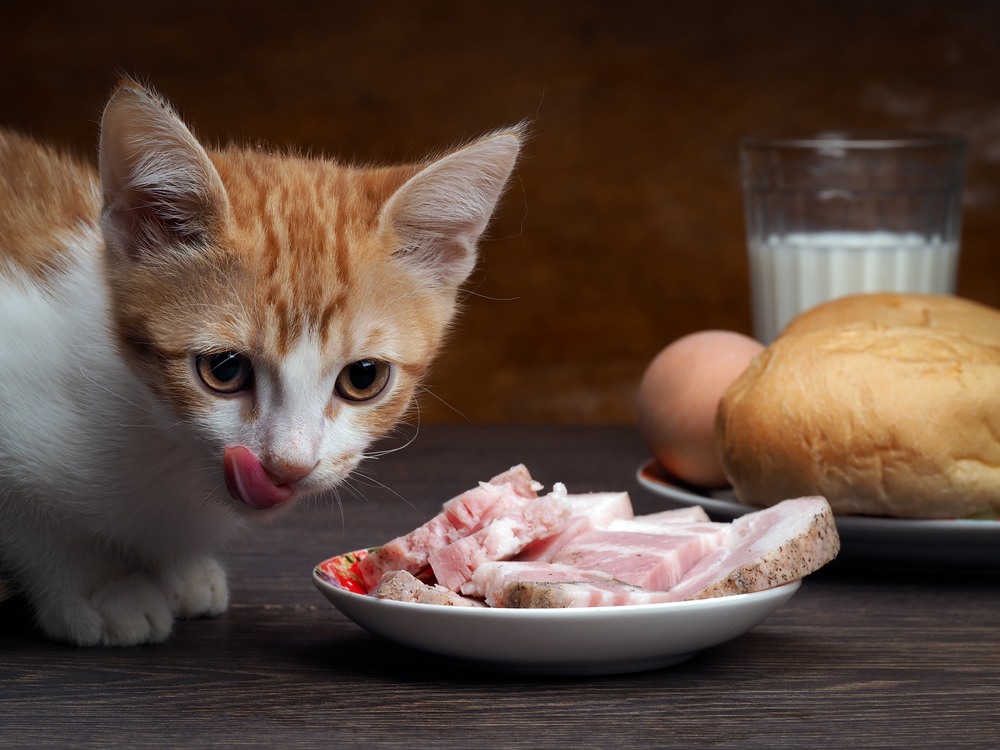 There are few delicacies out there that fully encapsulate your entire palette like ham. It’s sweet, salty, savory, with a great mouthfeel. And it’s used in all situations from a school sack lunch sandwich to the showcase at the dinner table for Christmas dinner. But can your cat dig in with you?

Is ham safe for cats?

While yes, cats can technically eat ham, it is only safe in small amounts.

Ham is a pork product, and pork, in general, isn’t too terrible for your feline. After all, cats are natural carnivores. And ham can provide many different essentials that your cat’s body needs.

However, there are some specific caveats about ham that you should be wary of when feeding it to your cat.

Health Benefits of Ham and Pork for Cats

Pork also has plenty of essential vitamins and minerals. Vitamins B12 and B6 along with thiamine help to bolster your cat’s nervous and circulatory systems. And the phosphorus contained in ham supports healthy tooth and bone growth.

Ham also has bioactive compounds such as taurine, creatine, and glutathione. These compounds are essential for your cat’s muscle development and help your kitty function on a day to day basis.

What To Look Out For: Fat

But ham isn’t just lean pork. Ham comes from the hindquarters of a pig and can be very fatty. And while that fat is one of the components that makes ham lip-smackingly delicious, it can have some serious effects if eaten in larger quantities. Excess fat can start to build up plaque inside your cat’s arteries, leading to an increased risk of heart attack or stroke.

What To Look Out For: Seasonings

However, the fat in the meat isn’t the biggest offender. Ham is normally cured and often covered with some sugary glaze. The curing process of the meat gives it that salty, savory flavor that’s almost irresistible. And it also overloads the meat with salt which is known to raise your cat’s blood pressure. The ham’s glaze can also be loaded with extra sugar and other ingredients that aren’t great for your cat.

Perhaps the biggest ham offender though comes from deli-style ham. These cold cuts typically have a much higher sodium content than other hams.

How Much Ham To Feed Your Cat

Although there are downsides to your cat eating ham, a pinch or two every once and a while isn’t really going to hurt them. Just don’t try and feed them ham as a meal replacement. Like most snacks, you don’t want their ham intake to exceed more than 5% of their diet.

And you don’t want to feed them ham every day. It should only be reserved as an occasional treat or special situation.

How To Feed Your Cat Ham

There’s a good chance your cat’s not going to need any extra encouragement when it comes to eating it. As a matter of fact, your feline friend may try to steal it straight off your plate. However cute this may be, we recommend you not letting them do so.

Ham is best used as a topper for some other high-quality cat food such as Blue Buffalo Wilderness Grain-Free Dry Food. You’ll probably watch your cat gobble up their food faster than ever before with this tasty combination. But remember, just because they love it doesn’t mean you should forgo moderation.

In a nutshell, yes, cats can eat ham. But that doesn’t mean they should eat it all the time. Although ham has plenty of great flavor and protein for your cat, there’s still a bunch of other things in it that aren’t great for them. Ham is best reserved for special occasions and special treats.