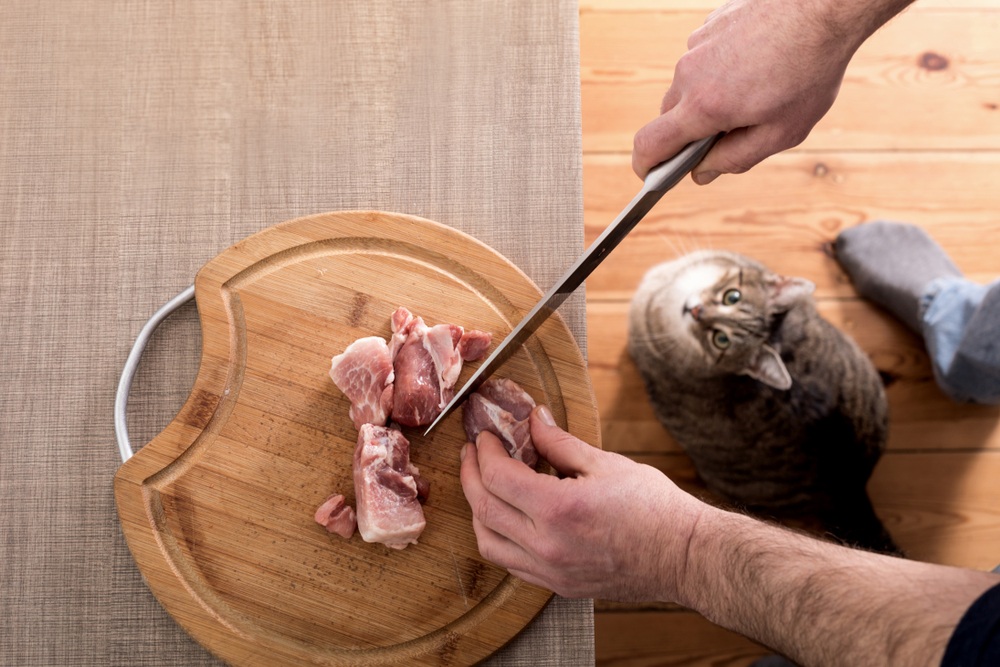 Cats are what’s known as obligate carnivores. This means that they get all the nutrition they need from eating other animals. In the wild, you won’t find cats eating fruits or vegetables. This might leave you wondering why you don’t see many cat foods listing pork as the main ingredient. Is it safe for cats to eat?

Yes, pork is safe for your cat to eat. Feeding a little pork to your feline on occasion isn’t going to cause any health problems. But it’s definitely not the best choice and it can cause some problems if you choose this treat too often. If you plan to feed this fatty meat treat to your cat, read on to learn about the precautions you need to take and the alternatives that might suit your pet better.

Precautions to Take When Feeding Pork to Your Cat

Before you toss that cut of pork over to your cat, there are a few precautions you need to take. Skipping these can make that treat a lot less healthy and might even pose some potential health risks for your kitty.

Dogs may love to chew on a good bone, but for cats, bones only present a choking hazard. That’s why you’ll need to make sure that you carefully remove all the bones from any cut of pork you give your cat.

If you’re going to feed your cat any meat, it must be fully cooked before you give it to them. This is especially true with pork. Pork is full of parasites that die off during the cooking process. If you don’t thoroughly cook the ham, the parasites won’t be killed off and they may transmit to your cat when it eats the pork.

Since cats need lots of protein and they eat a diet comprised mainly of meat sources, it seems counterintuitive that you would want to moderate the amount of pork you offer your cat. The same rule doesn’t apply to chicken or turkey, so what’s different about pork?

Why Your Cat Should Only Eat Pork Occasionally

Pork isn’t the same as chicken or turkey and there’s a good reason why you don’t see it being used as the main protein source for many cat foods. Chicken and fish seem to be used in most commercial cat foods today, but why not pork?

There are two main problems with pork that make it a less viable option for cats. For these reasons, pork is best served as an occasional treat, rather than a dietary staple.

Pork tends to be much fattier than other types of meat. Chicken is particularly lean, which is why it’s used as the main protein source for so many commercial cat foods. But pork often has large globules of fat. Not only can these contribute to weight gain causing your cat to become overweight and possibly obese, but they can also block your cat’s arteries if consumed too often.

The other problem with such fatty meat is that it means there’s less protein in the same size serving of pork than there is in other meats. That protein is replaced with fat, which is less beneficial to your cat and more likely to contribute to weight gain.

Modern cats aren’t getting tons of exercise. Most of them lead pampered lives indoors where they rarely expend more energy than chasing around a laser pointer for a few minutes. If these cats consume too many calories from fat, it’s going to take a long time for them to work it off with the minimal amount of physical activity that most house cats get.

The other problem with pork is its high sodium content. If cats consume too much sodium, they can develop a condition called hypernatremia, also known as sodium poisoning. This can be a very serious condition requiring professional medical attention. Fluid therapy is often needed to correct the imbalance caused by excessive sodium intake.

Benefits of Feeding Pork to Your Cat

So far, we’ve mainly discussed the dangers and downsides of feeding pork to your cat. But this meat treat can be safe to feed a feline in moderation and even has some benefits for them to gain from it.

As obligate carnivores, cats need to eat a lot of protein. It’s an essential part of all the systems within their bodies. Pork, like all meats, is comprised substantially of protein. The problem is, there are leaner alternatives with even higher protein content that should be used more often than pork.

Loaded with B Vitamins

Pork is high in many minerals and vitamins; particularly vitamins B6 and B12. B12 is an important vitamin for cats. It’s essential for the proper function of their nervous systems, immune systems, and digestive tracts.

What Pork to Feed Your Cat

If you’ve decided to feed a bit of this salty meat to your cat, then you ought to know which cuts to choose. All cuts of pork are not created equally, and which one you pick will make a difference for your cat.

In general, you want to pick the leanest cuts of pork and stay away from the fattier cuts.

Skip fattier cuts such as:

As we’ve mentioned, there are several healthier alternatives for your cat. These options are less fatty, contain less sodium, have higher protein content, and may even contain beneficial nutrients not found in pork.

Fish is loaded with protein and often contains far less sodium than you’ll find in pork products. Even better, you can catch fish fresh so you know that nothing was ever added to the meat. Moreover, fish contains loads of omega fatty acids which have a ton of benefits for your cat, including:

Chicken is cheap, lean, tasty, and packed with tons of protein. That’s why it’s used as the main protein source in so many cat foods. But it can still make an excellent treat when you give some to your cat straight. Just make sure it’s fully cooked and has no skin or seasonings.

Pork, like any other meat, is packed with protein that can be beneficial for your cat. But unlike other meats, pork is also fatty and loaded with sodium, which is why it’s not the best treat for your cat. Still, a little bit isn’t going to hurt and might make a tasty treat as long as you only serve it occasionally.