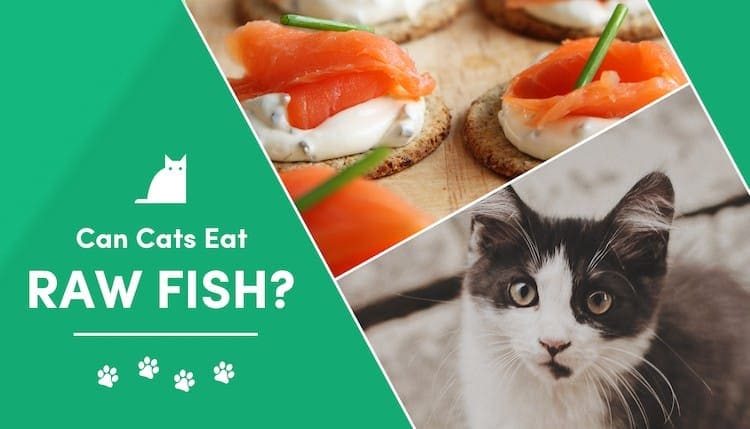 There are videos all over the internet of adorable cats wandering around and eating different things. One of the most notable ones is a stray mother cat taking a fish to her kitten to eat. The interaction is truly heartwarming.

The problem with these videos is that they will often give us the wrong idea of what our cats can and can’t eat. Of course, a stray momma cat is going to do what she can to keep her kitten and herself fed.  But what about the cats we have in our homes? Is it okay to give them raw fish? Let’s take a look at what the experts say.

But according to Dr. Sally Perea, board-certified in vet nutrition, it can cause gastrointestinal problems for cats. Raw fish contains thiaminase, which often breaks down thiamine in cats. A deficiency in thiamine can lead to neurological problems and even convulsions.

Now that we know the truth about giving our cats raw fish, what about fish in general? Is it safe to give our cats a bit of tuna? What about if we have a piece of flounder for dinner and we get those beseeching eyes that we know so well? Let’s take a look a bit further.

Can your cat eat fish? The good news is, yes, a bit of fish won’t hurt her. But there are a few things that you should remember.

Fish Should Only Be Given as a Treat

Most cats don’t eat it in the wild and fish isn’t a part of their natural diet. Fish is deficient in the minerals that cats need, like iron, sodium, and calcium. Fish also contains a lot of phosphorous. If you only give your cat it occasionally, it’s not a problem. But otherwise, it can really be problematic for your cat. Phosphorus can damage your cat’s kidneys. It’s also important to look at the phosphorus content in your cat’s food.

Make Sure the Bones are Removed

If you give your cat cooked fish, make sure that it doesn’t contain any bones. Bones can obstruct or damage your cat’s gastrointestinal tract or throat. Even if you remove large bones, remember that there still can be smaller bones that are in the fish. Chefs use tweezers for removing these and it can take a long time. It’s really better to be safe than sorry and avoid giving them fish with bones.

Products that are packed in oil, such as some tuna and sardines, shouldn’t be considered cat food. Their polyunsaturated fat content is high, and they can cause a fairly common condition known as pansteatitis, also known as yellow fat disease. Some signs of this disease are things like:

If you want to give your cat some cooked fish, use these guidelines:

Finally, it’s important to note that fish aren’t often swimming in the cleanest waters. This means that fish may be carrying toxins. Two of the biggest concerns are pesticides and PCBs, which can affect cats as well as humans. The same goes for heavy-metal contamination. Some fish are known to be contaminated with things like magnesium and mercury that pregnant women and those in their childbearing years are advised not to consume. So, it’s best that you don’t give them to your cat.

If you’ve ever stood outside your door calling your outdoor cat and waiting for them to come home, then you’ll…
The category

People love to joke that cats domesticated us and not the other way around, owing to their exceptionally independent nature.…
The category

Fleas can be irritating at the best of times, but if left untreated, they can cause discomfort and even lead…