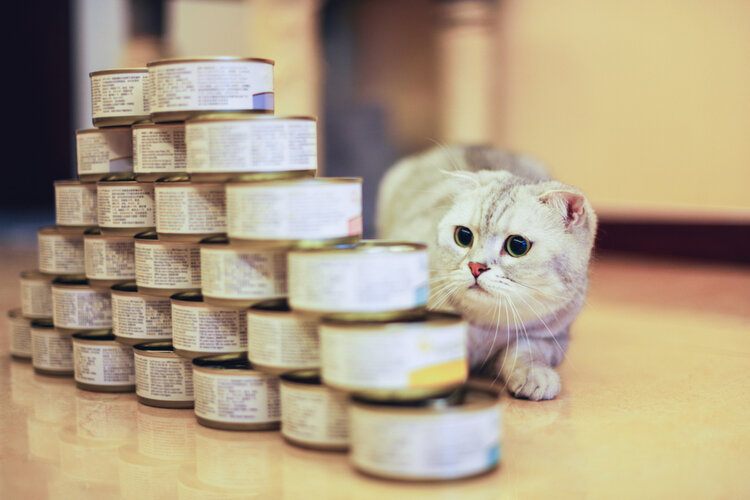 Cats can be stubborn and independent creatures. You’ll call for them forever, and they will remain hidden just out of spite. But if you start to open a can of tuna?

There’s a good chance that the little rascal will magically appear out of thin air almost begging for a taste of what’s inside. And although we love to treat them with it, is tuna safe for cats?

Yes. Tuna — canned or otherwise — is safe for your cat to eat in moderation.

Fish is a wonderful source of protein, fats, and nutrition for cats. Many commercial cat foods actually use tuna (or some other fish) as a prime ingredient when developing their balanced formulas.

However, that doesn’t mean you should swap your furry friend over to an all-tuna diet. There are quite a few precautions that you need to keep in mind when treating your cat to a delicious tuna snack.

Presence of Mercury in Tuna

You probably heard or read somewhere that tuna contains trace amounts of mercury. Mercury is a naturally occurring element, but it’s the mercury that’s created and/or redistributed during industrial pollution that becomes dangerous.

Mercury and mercury byproducts fall out of the air and settle in our planet’s water sources. And as this harmful element settles, it begins to be eaten by smaller aquatic organisms such as plankton. The plankton are then eaten by larger fish and so on.

Tuna are natural, long-lived predatory fish with a spot near the top of the ocean’s food chain. And as logic dictates, these big fish have much higher mercury concentrations than other smaller ones have. (The same is true for swordfish, sharks, and other large predatory fish.)

How To Minimize Mercury Intake

Mercury isn’t fully lost during the canning process. But these mercury levels aren’t super dangerous to either you or your cat unless eaten in large, frequent quantities. Either way, you can still minimize your mercury intake when eating canned tuna by switching to light or chunk-light tuna.

Light tuna actually comes from a different species of tuna then the more premium white or Albacore tuna. Light tuna is skipjack tuna and has been found to have up to three times less mercury in it than Albacore.

Although most cats absolutely love fish, there are some out there who can’t eat it due to health concerns. Fish allergies in cats aren’t as uncommon as you might think. In fact, the Merck Veterinary Manual ranks fish as one of the most common food allergens for cats.

If you notice your cat exhibiting the following signs after eating tuna, please consult your vet as your pet may have an allergy:

Tuna can be relatively healthy for your cats. It’s full of protein and fat which are essential for your furry feline to live their best lives. But tuna isn’t the most balanced meal. While it does have great protein content, there’s just too much unsaturated fat with no supplemented vitamins and minerals.

As an occasional snack, tuna doesn’t prove to be a diet disruptor. But when fed as a primary food source, your cat will soon find themselves lacking in key nutrients.

Excessive tuna feeding can lead to another issue, feline obesity. The average indoor house cat doesn’t get nearly as much exercise as their outdoor counterparts. And the large amount of protein and fat in tuna they eat won’t be properly used and converted into lean muscle.

Obesity isn’t just a weight problem either. Studies have shown that there are direct correlations between obesity and increased risk for arthritis, inflammation, and diabetes, among others.

This may sound strange, but your cat can become physically addicted to tuna. Veterinarians commonly call these felines “tuna junkies”, and the condition is a lot more common than you would think.

This is typically caused by using tuna as your cat’s primary food source. The tuna becomes a part of their routine, and like other addictions, your cat won’t feel comfortable without it. They may choose not to eat anything else and may starve themselves for days waiting for their tuna.

Aside from mercury considerations and lack of complete nutrition, an all-tuna diet can also have other undesired effects. Tuna is high in mineral salts which can ultimately lead to bladder stones. And the lack of vitamin E in tuna can cause steatitis — or yellow fat disease, which is when the fat inside your cat’s body hardens and causes excruciating pain.

If you fear your cat may already be addicted, consult your vet for the best course of action to help your furball. Every case is different; however, tactics such as gradual weaning appear to work the best.

It may seem like tuna is all-around harmful to your cat, but that isn’t true. All of the above issues are completely avoidable through moderate feeding.

You shouldn’t be feeding your cat tuna daily. Instead, make it a special once-a-week treat. Doing this will avoid mercury buildup, nutritional deficiency, and addiction. And when feeding, don’t give them the whole can all at once. Doing so could cause unforeseen, unwanted short-term effects such as diarrhea or indigestion.

But is tuna safe for cats? In moderation, absolutely.

And it makes for an amazing special treat for any non-allergic feline. However, if you don’t want to give your cat tuna, you can always try other fish treats such as Vital Essentials Minnows Freeze-Dried Cat Treats.