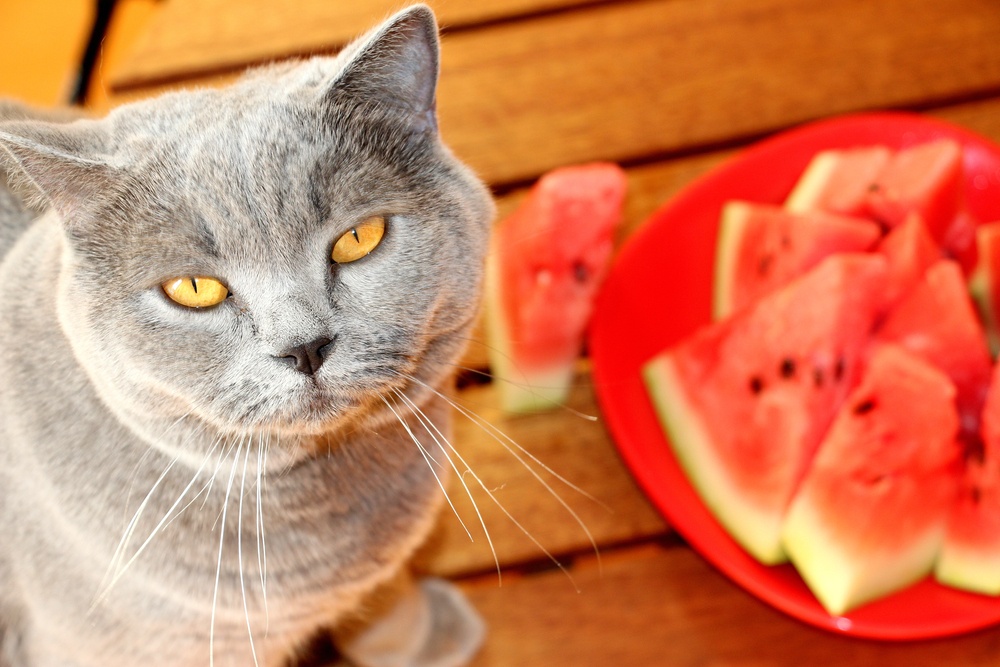 During hot summer months, a cool snack always sounds good. Many of us choose the healthy route by cutting up a watermelon and bringing it with us. While humans enjoy it and can get plenty of benefits from such a tasty snack, can cats eat watermelon?

The answer is yes, cats can eat watermelon. You should take precautions when preparing and serving it to them, but it is safe for them to eat.

Some cats will love this tasty new treat, while others will turn their nose up at something so different. Either way, watermelon can provide nutrients for cats that they might need in their diet.

Is Watermelon Safe for a Cat?

Watermelon is not toxic for cats to eat. It is not a food that they are naturally attracted to, but that doesn’t mean that it will harm them. There are precautions to take when you give your cat a chunk of watermelon, though.

If your kitty is suffering from mild constipation or is dehydrated on a hot summer’s day, watermelon can hit the spot.

There are serving options that we humans enjoy with our watermelon. Some people sprinkle salt on it, while others serve melon balls wrapped in cheese.

For your cat, it is better to avoid these options and just serve straight watermelon. Cats do not require almost any sodium in their diet, and too much dairy is hard on their digestive system.

Another option if you want to help your cat cool down is to freeze the watermelon. People like to make it into a natural popsicle. This method is acceptable for your fluffy feline because it is still only the watermelon. It will take them time to get through it, but they will do it happily.

How to Feed Watermelon to a Cat

So, what are these safety precautions you should take?

First and foremost, remember the adage, “everything in moderation.” You must keep the watermelon consumption to a minimum. Your cat might enjoy such a snack, but it is best not to overdo it. It isn’t just water, even if the name can be a bit deceiving.

Watermelon contains 6 grams of sugar per every 100 grams of watermelon. This amount is nothing compared to something like candy. In only 100 grams, a Hershey bar contains more than seven times as much sugar, at 45 grams!

However, the issue is that animals are not made to process sugar well, natural or not. Too much watermelon can throw their digestive systems for a loop and not in a fun rollercoaster way.

Many of us were told growing up that if we swallowed a seed while we ate the watermelon, it would take root in our stomachs. While this is definitely not true for humans and isn’t for cats either, seeds are still dangerous. They are big enough to present a choking hazard.

The other issue is that like most fruit seeds, watermelon seeds contain trace amounts of a poison called cyanide. There is not enough cyanide to hurt humans, but cats are much smaller and more delicate. If you don’t have a seedless watermelon, only feed your cat bits without any seeds in it.

Eating the rind would be quite tricky for cats in any case, but don’t give them the opportunity at all. It isn’t toxic, but it is so hard to digest that it can cause significant gastrointestinal upset.

In other words, a small piece without seeds or rind is the perfect piece of watermelon for your cat.

Health Benefits of Watermelon for Cats

Watermelon isn’t only useful to cool you and your cat down, but it also has nutrient value.

To start with the most obvious, it helps your cat stay hydrated. As the name suggests, it is primarily made of water. In fact, it is 92% water.

Watermelon isn’t only water, though. It is rich with fiber. It has plenty to help your cat’s digestive system run smoother. That is why it can be an excellent choice for constipated animals.

Watermelon has low calorie content, making it easy to sandwich into a diet. It doesn’t have almost any cholesterol either. Major vitamins that a cat needs are contained in watermelon, including vitamin A, vitamin B1, vitamin C, and vitamin B6.

Micronutrients are also present, although not in substantial amounts. These include biotin, potassium, magnesium, and antioxidants.

Health Concerns about Watermelon for Cats

If your cat has certain health problems, then watermelon will not be a wise choice for them. These can include diabetes and obesity. Due to the sugar in the watermelon, even in low amounts, life-threatening symptoms of diabetes can be triggered.

If your cat is on a diet and trying to lose weight, watermelon isn’t a good choice either. Even though it is low in calories, watching out for their sugar level is the primary concern.

Finally, some cats could have allergies to watermelon. It is not especially common for cats to eat watermelon, so not all the possible symptoms are known. However, when you try to feed it to your feline for the first time, keep an eye on them to make sure they do not react adversely.

Symptoms to Watch For

If you have a cat that struggles with certain health problems or could have allergies, there are symptoms you should watch for.

For example, symptoms of diabetes in cats include:

The symptoms that manifest if your cat is allergic to watermelon are similar. They could begin to vomit, experience indigestion, or start having diarrhea or constipation. If any of these happen after feeding them watermelon, do not give it to them again. If the symptoms persist, you may need to see your vet.

If you are wondering if your cat can share watermelon with you, then the answer is yes. Watermelon is entirely safe for cats to eat. Before serving it to them, though, make sure you take out all of the seeds and cut it apart from the rind. Freeze it if you want to help them cool off.

If you are feeding watermelon to your cat for the first time, it is best to observe them for a while. If any visible symptoms appear, avoid feeding it to them again. Otherwise, now you have a tasty treat that everyone can enjoy.