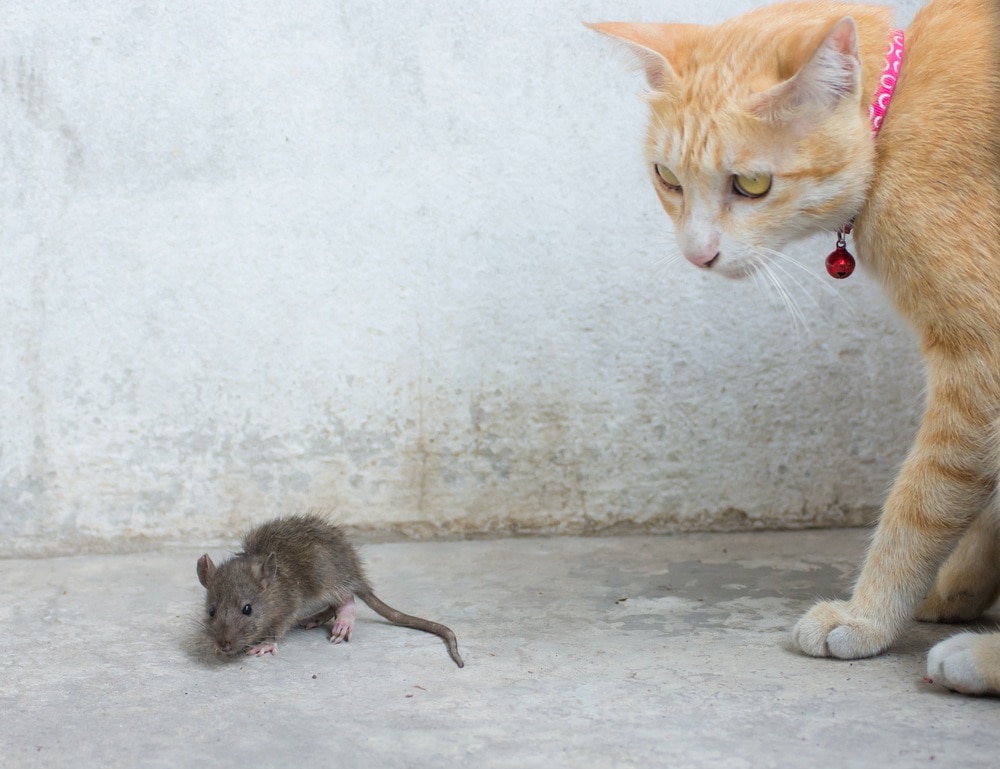 Can cats kill rats? The answer to this one actually varies, as it really depends on the size and character of the cat, and the size of the rat.

Cat’s are generally quite intelligent. Unlike a small dog that has delusions of grandeur and will take on an opposing beast of any size, and the cat is better able to weigh up its chances.

An average cat, if face to face with an oversized rat is unlikely to attack, as it will realize that it may come to some harm.

The cat is unlikely to run away however, he will stand his ground and scare the rat aware, with out actually going in for the kill.

Again, a more ferocious cat may well go that final last step, kill the rat and then bring it to your feet as a little gift as if to say, ‘look how great I am’.

An overly confident cat, (watch this video here of a cat attacking a dog), will not be phased by a rat of any size. If faced with a nasty large rodent, he will go in for the kill and play around with the carcass like its Christmas.

Likewise, and average-sized cat of a normal character is unlikely to be scared of a small to normal sized rat. Again, your pet will be able to assume the role of an expert pest controller.

So yes, cats can certainly kill rats, however, some argue that it is not something to be encouraged, and you may want to prevent your cat from killing rats.

Can Cats Kill Rats – Is It A Good Idea?

Rats do carry diseases and could possibly infect your cat with something you would rather they didn’t have. While your cat is out there hunting, they become more susceptible to roundworms as well as ticks.

If you have rats in the basement or they are an issue in the yard, cats may be a good way of controlling them. However, you should bear in mind that your cat may end up bring the rat back into the house, (either to play with or to show you). Obviously this is something you would want to avoid. Poison or specialist rodent extermination may well be a better way to go.

Some argue that cats that are used as mousers, (and in this case to catch rats), can often be too broad in the instinctive hunting methods. I.e they end up being a predator to animals when they shouldn’t.

Introducing a non-native predator to an environment can be very detrimental. If your cat is bringing home, bird eggs, baby chicks, squirrels, or other species from your neighborhood, then clearly they are doing more harm than good.

Also, there is an argument in the fact that cats are the only species to shed the parasite toxoplasma gondii in their feces. (A reason why women should not be exposed to cat poo while pregnant – it is potentially very harmful to the baby.)

If the parasite is spread into the environment from the cat’s droppings while on the hunt, it can live for many months. In the process soil, water, fruits, and vegetables can be contaminated, ready to be passed on to animals living and grazing in the infected area.

And finally, using your cat to catch rats, (or other rodents), can place them in danger. The aforementioned diseases, the path of an oncoming car, one day they may come up against an over-sized rat who really does fancy his chances resulting in a very nasty fight.

Although some cats are clearly able to kill rats, and will enjoy the hunt, there are potential hazards to consider. In short, you are better off getting one of these instead:

A Rat Zapper – a cleaner, far healthier solution for you and your cat.