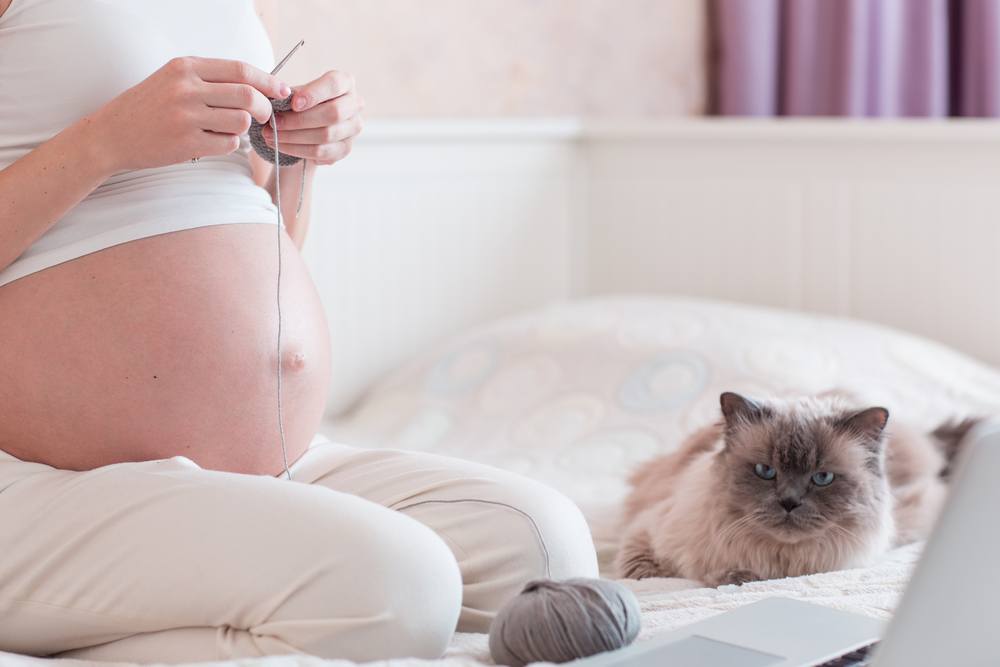 If you’ve spent enough time around cats, then you know that they seem to have a mysterious sixth sense about all sorts of things (like when you’re about to open a new can of food, for example). In fact, many people claim that one thing that cats can sense well before people do is whether their owner is pregnant.

That certainly sounds incredible — but is it actually true?

The fact of the matter is that we just don’t know. There haven’t been any credible studies performed to test this possibility, but there is an abundance of anecdotal information that suggests that our cats know a bun’s in the oven before we do.

One thing we do know for certain is that cats have a much more powerful sense of smell than we do. The hormonal changes that begin to occur during pregnancy can subtly alter how you smell, and it’s likely that your cat will pick up on that. However, that’s not the same thing as realizing that you’re pregnant.

Your body temperature will also rise once you get pregnant. Since cats are naturally drawn to warmth, they may be more likely to curl up in your lap than they were previously. Many people notice this, then when they find out that they’re pregnant, they use it as proof that their cat knew before they did.

Cats are also extremely sensitive to changes in routine. While you may not notice it, pregnancy will change your body in subtle ways; everything from how you stand to how much time you spend on the couch will change, and your cat will pick up on it. They’ll likely know that something is different, even if they don’t actually know that you’re pregnant.

All of these bits of evidence point to a cat’s ability to spot key differences in you, but there’s nothing about them that proves that they know you’re pregnant. However, if you’ve noticed your cat starting to act strangely around you, it may be worth buying a pregnancy test, just in case.

Reasons to Doubt the Idea That Cats Can Sense Pregnancy

The biggest reason to doubt that cats to sense pregnancy is the simple fact that there haven’t been any scientific tests done to prove it. At this point, it’s little more than an old wives’ tale, albeit one with a bit of circumstantial evidence in its favor.

Most of the anecdotal evidence for the idea comes from people who obsess over their cats, to say the least. As a result, they’re more than willing to attribute all sorts of extraordinary abilities to their furry little friends, including the power to sense a burgeoning fetus.

Also, focusing on the anecdotal evidence ignores the lack of evidence from other cat owners. There are certainly plenty of pregnant cat owners who didn’t witness any change in their cat’s behavior during the pregnancy, and this needs to be used as a counterbalance to the positive claims made by other owners.

However, even if there’s no reason to believe that cats can detect a pregnancy, there’s little reason to disabuse people of the notion either. It’s a harmless bit of fancy, and if it provides comfort for some people or makes them feel closer to their cat, then it’s probably a good thing.

We just wouldn’t recommend relying on your cat’s intuition instead of your doctor’s medical degree.

How to Help Your Cat Adjust to Your Pregnancy

If it turns out that your cat’s new behaviors really were a harbinger of your pregnancy, then it’s important to take steps to make the new transition as painless as possible. Some cats respond poorly to the news that a new baby is on the way, and that can lead to destructiveness, using the bathroom outside the litterbox, or even increased aggression.

The most important thing you can do is pay attention to your cat. They’ll definitely pick up on signs of neglect, so make sure they know they’re still valuable members of the family. Give them as much physical affection as they’ll tolerate.

Try not to change your schedule too drastically either, as that can really be upsetting to your cat. This will be difficult once the baby arrives, but make a concentrated effort to retain some normalcy in your kitty’s life if you can.

You may also need to enlist friends and family members to help care for your cat, especially when you’ll be in the hospital. Make sure they’ll be fed on time, and see if you can find someone willing to play with them as well. This will go a long way toward making them feel loved and wanted.

Of course, don’t go too far in this direction — you don’t want your cat to become overweight because you’ve been spoiling them with treats, and they shouldn’t dictate your family’s schedule. Just try to think about them when planning your day and make an effort to include them as much as possible.

So, What’s the Verdict? Can Cats Sense Pregnancy?

There’s no proof that cats can reliably detect pregnancy, but there’s plenty of circumstantial evidence to suggest that they’ll notice the subtle changes that accompany it.

Regardless of whether you believe that they can sense a pregnancy in advance, the knowledge that you have a bun in the oven should bring with it a desire to keep your cat feeling as loved and welcomed as possible.

Your cat needs to know that you have their back — just like they won’t have yours the first time that the new baby starts screaming at 2 a.m.