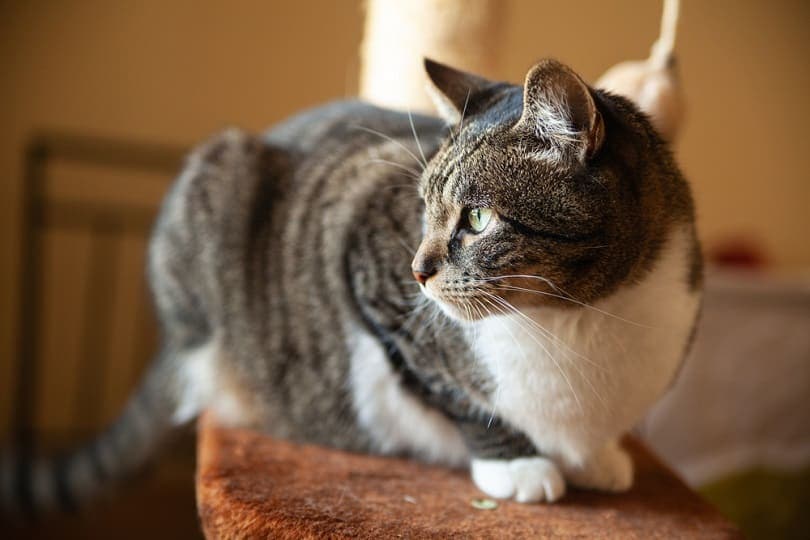 Cat’s uncanny abilities to pick up cues like illnesses, diseases, and moods are some of the reasons why they are affectionate, especially towards people with emotional issues. Yes, just like dogs, kitties can be surprisingly aware of people’s emotions, good and bad energy, and even events before they happen.

While you may consider your kitty companion as a cuddly house pet, many cultures revere cats, tying them to magic and considering them all-knowing. Felines are capable of sensing when something is wrong – something that’s worth looking into.

What is a Cat’s Strongest Sense?

Hearing is a cat’s most robust and most prominent sense. While cats may hear sounds about the same level as humans and dogs, their ears can pick the highest pitch ranges. Plus, kitties can discriminate tones and pitches in sounds that occur as close as three inches apart.

It is the reason why these animals often react to the things that happen at a distance, such as approaching footsteps. Yes, you can attribute this characteristic to the cat’s ability to pinpoint impending prey and predators very well.

The cat’s conical-shaped ears and their periphery position at the head contribute to their impeccable auditory sense and ability to pinpoint sources of specific sounds. Both their ears can swivel and move independently, encouraging a 360-degree hearing.

The smell comes as a cat’s second-best sense, which is inarguably better than that of people. Believe it or not, a kitty’s sense of scent is almost fourteen times stronger than a human’s because of the over 200 million smell receptors in their noses.

In addition to the millions of odor receptors, cats have a pair of organs at their mouth’s roof known as Jacobson’s organ, which acts as a second smell sensor.

You can know when your kitty uses its secondary sense of smell if you see it pulling back its upper lips and opening its mouth when sneering. These features mean that felines can navigate their surroundings using their noses.

Felines’ sense of vision varies from cat to cat, although they all share a remarkable ability to see very well in dim lighting. Usually, a cat’s lifestyle and age dictate its seeing skills.

Their incredible night vision is thanks to tapetum, a particular layer in their eyes that reflects light to the eyes, allowing them to absorb as much light as they can.

Cats also have a good depth perception that allows them to see much further than humans. Their vision usually focuses on movement – this way, they can detect, define shapes and look out for food sources and threats much better.

Taste is a cat’s weakest sense because cats have the fewest taste buds than dogs and humans. Their sense of smell limits them to identifying fats and proteins because they are carnivores.

Their few taste buds deny them a taste for sweets and salty foods, which they only get from their meat diets.

What Things Can Cats Sense?

Cats have a fantastic intuition. Besides remarkable sense, cats have a mentality of constant survival instincts.

This may not mean that the creatures possess a sixth sense, as most cat owners think. But, there must be an elaborate explanation for these abilities.

Cats live in mild anxiety and constant fear regarding approaching predators. For this reason, fear is a primal emotion that they relate to and detect easily.

Humans display visible apprehension, such as changes in body language when afraid. While fellow humans may miss out on cues like tense muscles, shaky limbs, increased breathing patterns, increased heart rate, and a drop in temperature. The ever-observing felines can detect these micro-gestures.

It’s natural for humans to sweat when stressed and nervous. A cat’s superior sense of smell and acute vision makes them more likely to detect a change in scent and the behavioral cues that indicate that you are afraid.

Have you ever wondered why most cultures associate cats with death, bad luck, and witches despite their striking beauty? Cats have exquisitely acute senses and always seem to have an aura of understanding and relating with their environment.

Some pet parents even believe that their felines can tune into unspoken emotions, invisible danger, paranormal activities, and future events.

Since cats thrive and rely on intuition, they attune to biological, bodily, and behavioral changes in the other creatures and environments. This ability gives them the intuitive comprehension of signs of illnesses and death.

For this reason, a cat can detect if it is time for its owner or itself to die. Most kitties will approach their owner’s deathbed and cuddle with them. Some doctors even use this behavior to attend to dying patients in their nursing homes’ death beds.

Since cats can detect illnesses and death, they usually fake a poise to conceal their tribulations by not showing any sign of sickness and hiding in cool, dark, and isolated places for a private death.

Other cat owners suggest that kitties can pick up on people’s emotional distress, sadness, and happiness. This is not due to a cat’s perceived sixth sense but the ability to read and understand human body language and facial cues.

A cat will mirror your emotions, such that it lights up if you seem vibrant and take up a low-energy and assume a less-positive vibe if you are sad. It does so because it feels that the unmotivated emotions are the most appropriate at the moment.

Since felines can absorb all the signals living beings display, it explains why they quickly develop anxiety, stress, and behavioral problems.

Cats also possess the superpower to sense energy shifts in rooms and humans, including dangerous people and those who dislike cats or animals.

Although cats don’t sense bad people per se, they feel the people’s energy and judge their actions and behavior. And, if anything, it instantly develops fight or flight reflexes to protect themselves from them.

This ability also contributes to how most cat owners “meet” their cats-these animals can sense wicked humans and spot-on good ones.

While cat owners may see a cat’s whiskers as purely decorative, these fine hairs are vital for helping cats create and negotiate a deep understanding of their worlds.

Whiskers or vibrissae are sensitive hair-like extensions on a cat’s skin that provide felines with precise sensory information, allowing them to react to their surroundings.

The whisker’s tips pick the slightest changes in air pressure or wind direction, sending a message to the cat’s brain. The cats instantly become aware of impending environmental catastrophes like storms, thunder, and lightning.

Cats may start verbalizing, hiding for no reason, swishing tails, freezing in a place, and flattening their ears to signal their owners.

While kitties feel touch with their paws and body just like humans do, the most remarkable thing about a cat’s sense is its paw pads. A cat’s paw pads pick up on the slightest ground vibrations thanks to Pacinian corpuscles, the paw pads’ nerve endings.

These nerve endings provide them with detailed sensory information of sounds that can be difficult to locate otherwise.  Cats usually start alerting their owners by becoming restless and purring endlessly.

A cat’s elaborate sense of smell, ultra-sensitive sense of touch, auditory and night vision are stronger and more refined than people’s, making them more aware of their surroundings. Naturally, these four strong conventional senses allow them to react to events faster and more efficiently than humans can.

Whether it exists or not, a cat’s sixth sense is the mystery part that gives this animal its uniqueness. And, it is undeniably one of the reasons why you find cats irresistible.

Is Peppermint Oil Safe for Cats? What You Need to Know!

Peppermint oil has been touted as an effective flea repellent for cats. Indeed, fleas don’t want to go anywhere near…
The category

Bengal vs. Savannah Cat: What’s the Difference? (With Pictures)

Bengal and Savannah cats are both very similar. They are the result of breeding a domestic cat with a wild…
The category

If your typically pristine and proper cat is ignoring his litter box and peeing all over your carpet, it can…