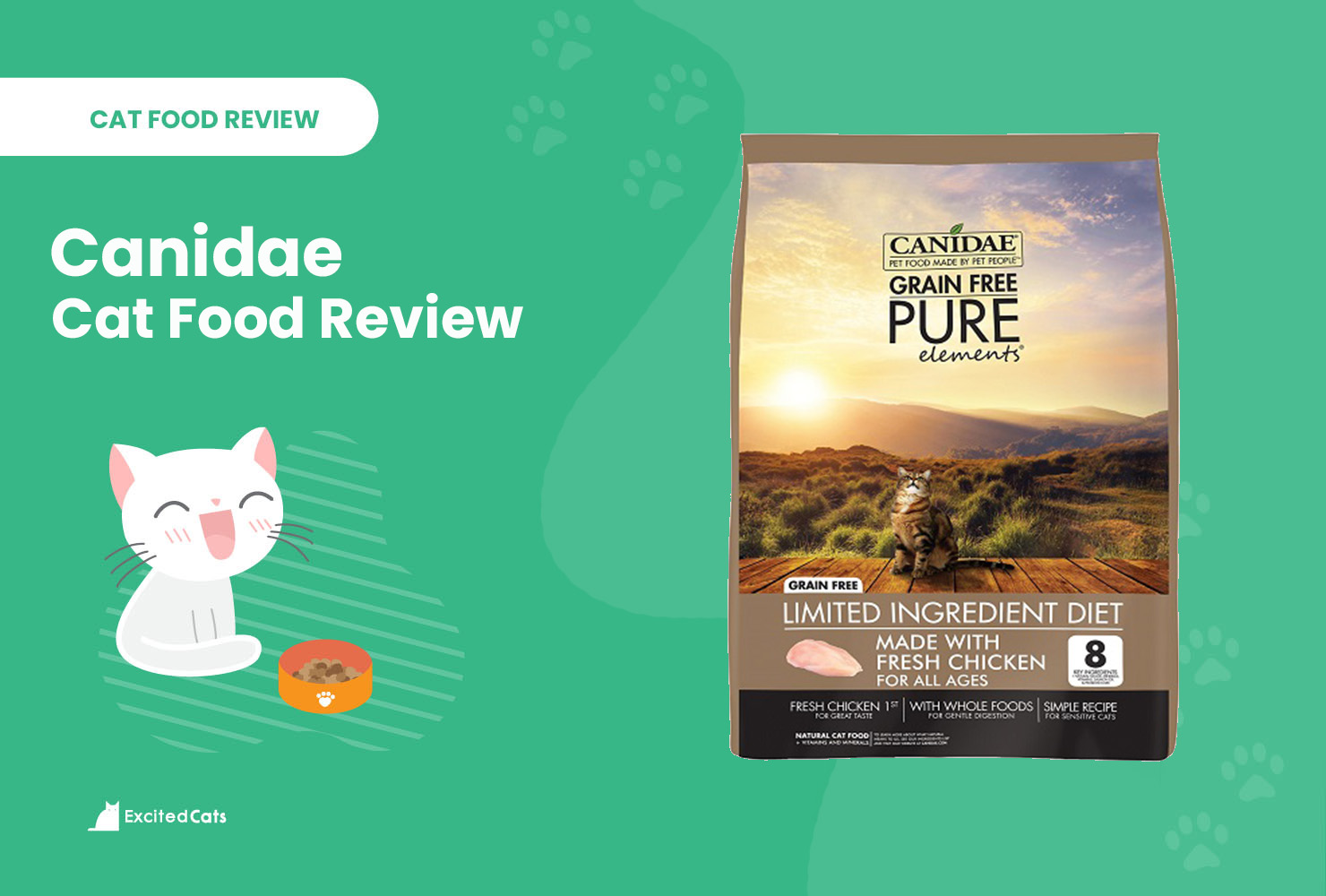 We give Canidae Cat Food pet food a rating of 4.1 out of 5 stars.

Canidae truly started as a labor of love. The company’s two founders, Scott Whipple and John Gordon, met in a pet food store owned by Whipple. The two men bonded over their love of animals and their dissatisfaction with the state of the pet food industry.

Rather than just gripe about it, they decided to enact change themselves. With the help of a few pet nutritionists and veterinarians, the duo founded Canidae in 1996. The idea was to create the kind of healthy foods that pet owners wanted to feed their animals, even if it meant paying a bit more to do so.

In 2012, the company opened a facility called Ethos Pet Nutrition in Brownwood, TX. While many companies brag about having the biggest facilities in the world, Canidae takes the opposite approach: Ethos Pet Nutrition is the smallest pet food facility in the United States. This allows it to make small batches of its foods, each of which is made with the utmost care.

Not all of its foods are made there, however. Some are made by outside manufacturers, but Canidae won’t specify which foods those are or where they’re made. This obfuscation is enough to throw the idea that they’re committed to improving the pet food industry into question.

Most of its foods are designed for owners who care about their cat’s health but don’t want to go bankrupt feeding them. As a result, many Canidae brands occupy the gap between the mass-produced junk that you’ll find in most pet food stores and the extremely high-quality premium foods that are only sold in specialty boutiques.

This all makes Canidae a slightly above average food across the board.

At a Glance: The Best Canidae Cat Food Recipes 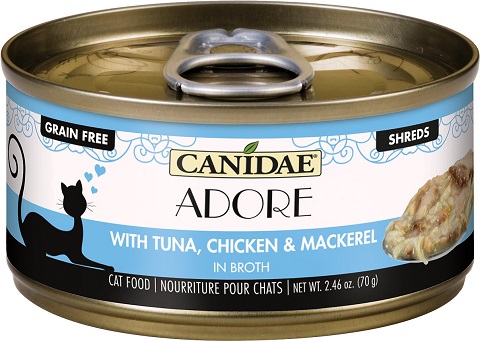 Who makes Canidae Cat Food and where is it produced?

Canidae is an independently-owned pet food company that’s still under the control of its original owners. It’s been around since 1996, which gave it a jump on many of its competitors when the healthy pet food craze began.

Some of its food is made at the Ethos Pet Nutrition facility in Brownwood, Texas, using natural ingredients that the company raised or grew itself.

Which Types of Pets Is Canidae Cat Food Best Suited For?

Many of Canidae’s foods are aimed at cats with diet issues or sensitivities. Canidae offers multiple grain-free and limited-ingredient options, both of which are good for cats with stomach problems.

Generally speaking, Canidae is the next step up from mass-produced junk. It uses healthier foods with almost no fillers or other problematic ingredients, but it can’t quite match the nutrition offered by truly high-end foods.

Which Types of Pets Might Do Better With a Different Brand?

Many of Canidae’s foods are extremely high in carbohydrates, and that can be problematic for cats with weight issues. Overweight cats will do better on a diet that’s high in protein and fat, as those nutrients will give them plenty of energy without adding to their waistline.

Those who have an overweight cat at home may want to feed them something like Tuscan Natural Carne Grain-Free Dry Cat Food, as it’s extremely high in protein and fat. If you’re judicious with portion sizes and provide your cat with enough exercise, it should help them shave off any excess weight.

Discussion of the Primary Ingredients

With a few exceptions, most of Canidae’s foods start with some form of protein as the first ingredient. This can take the form of lean cuts or animal meals; each one has its pros and cons, so ideally, you’d like to see both on the label. To Canidae’s credit, you often will.

Many of the formulas are grain-free, so you don’t have to worry about finding low-quality fillers like corn, wheat, or soy. Instead, there will often be potatoes or peas in their place. These are definitely better ingredients, but they’re not necessary, so it’s unfortunate that they often crowd out proteins.

That often brings down the overall protein levels, which are usually in the 30% range. That’s not terrible but it’s not great either. You typically want a minimum of 40% protein in a cat food, as cats are carnivores.

Canidae often uses a variety of protein sources in its foods, so your cat will get a wider assortment of important amino acids than they would if they were eating a food featuring a single animal. This better mimics their natural diet, which is generally a good thing.

However, be aware that some of Canidae’s limited-ingredient foods only have a single protein source. This is likely a trade that you’ll be willing to make if you have a cat with a sensitive stomach, but otherwise, you should default to a food with an assortment of protein sources inside it.

Canidae uses something called HealthPlus Solutions in all its dry cat foods. This is a mixture of important vitamins and nutrients that are essential to a cat’s overall health.

HealthPlus Solutions also contains an assortment of probiotics and antioxidants, ensuring that your cat will have a healthy digestive system and a powerful immune system.

Although we may have certain issues with Canidae’s foods overall, there’s little to complain about with HealthPlus Solutions.

The raw diet craze has taken off in the past few years, and many people swear by it. However, it can be expensive and difficult to follow, so Canidae’s Pure Ancestral Diet line allows pet owners to dip their toes in before committing to the diet completely.

The kibble in this line is coated with freeze-dried raw meat. This gives your cat some of the benefits of eating raw without requiring you to cook for them, and it’s much easier on your budget.

It’s not the same as feeding a completely raw diet, but it will allow you to see how your cat tolerates eating raw meat so you can make an informed decision about switching sometime down the line.

The use of cheap fillers like corn, wheat, and soy is one of the most reliable ways to tell a low-quality food from one that’s at least above-average. Those fillers are used by manufacturers to add inexpensive bulk to the food, but they offer no nutritional value and many cats have difficulty processing them.

Canidae doesn’t use any of those ingredients in its foods. That’s not enough to make it a premium product, but it does elevate the food over some of its cheaper competition.

Many of Canidae’s Kibbles Rely Heavily on Animal Meals

Many of Canidae’s foods use animal meals exclusively. This helps the company keep costs down, but your cat will miss out on a few important nutrients as a result.

Canidae has a largely positive recall history, with one notable exception.

In 2012, the company recalled several of its foods due to salmonella contamination. The affected foods were all made by one of the companies that Canidae outsources production to, but it’s unknown whether Canidae continues to use that particular company to manufacture food. 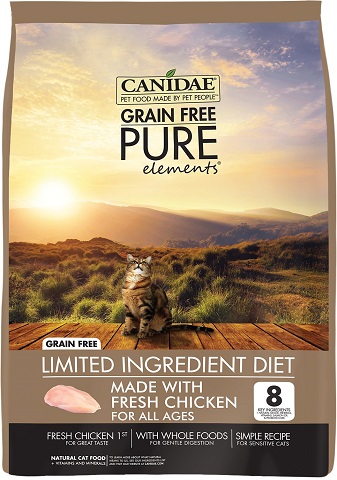 Those ingredients are heavy on the protein, with chicken, turkey meal, and fish meal heavily featured. The overall protein levels are still on the low side at 35%, but it’s nice that they include a wide variety of animal sources.

The fat levels could also use a boost, as they sit at just 18%. However, the food makes up for that by being high in omega fatty acids, which are important for coat health, immune function, and brain development.

The formula is grain- and gluten-free, so most cats should tolerate it well. The probiotics inside should boost digestion as well.

Canidae Adore is a wet food that’s loaded with seafood like tuna and mackerel. There’s also chicken inside for an added protein boost.

The first ingredient is water, though, which is both a good and bad thing. It’s great for cats that don’t drink enough, as it will help stave off dehydration by giving them plenty of moisture. However, it also cuts down on the protein levels, which in this case, sit at 11%. That’s decent for a wet food, but it could be higher if there was more room for meat inside the can.

Fish is already high in omega fatty acids, and the formula also uses sunflower oil to add even more antioxidants. You’ll be hard-pressed to find a food that has more.

The food is pricey, though, so you may be tempted to go with a cheaper option or just stick with dry kibble. Still, that’s the price you pay for a food that uses high-quality ingredients like the fish in these cans. 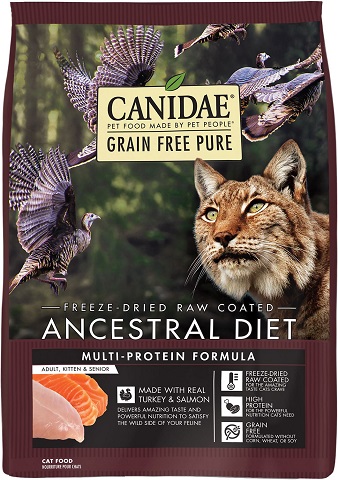 Canidae PURE Ancestral Diet is based around the idea that cats do best when eating a diet similar to what they’d find in the wild. As a result, it’s grain-free and coated with freeze-dried raw meat.

That raw meat adds a ton of important amino acids that get lost during cooking, and many cats love the taste, so it’s good for finicky eaters.

It’s filled with protein at 40%, although the fat levels leave something to be desired at 16%. The protein comes from a variety of animals like turkey, salmon, duck, pheasant, turkey, and lamb, giving your cat a wide array of vitamins and nutrients.

However, it also includes dried egg, which is an allergen for many cats. Your cat may not process it as well as some other foods as a result.

All in all, though, Canidae PURE Ancestral Diet is a good choice for anyone looking to test the raw food craze with their cat.

If you’re looking to transition your cat from cheap, mass-produced foods to something healthier, then Canidae represents a good middle ground between the junk and the premium stuff.

The food is fairly high-quality, with no cheap fillers or chemicals, although their nutritional levels leave something to be desired. It’s also more affordable than most superior foods, so it’s a good way for owners on a budget to give their cats a decent meal.

In the end, Canidae is an above-average food, but little more than that. You can find much better foods if you’re willing to pay more, or you can drop precipitously in quality if you want to save a few bucks. Your cat could do better, but they could do much worse too.

When most people think of Greece, they are transported to the Acropolis or the ocean, and the homes perfectly sculpted…
The category

Can Cats See TV? The Answer is Fascinating!

Have you noticed that your cat intently watches the TV at times? Maybe a bird flickered by, or a small…
The category

How Long Can Cats Go Without Water?

Cats are notorious for not drinking enough water, to the point that there is an entire industry of pet fountains…