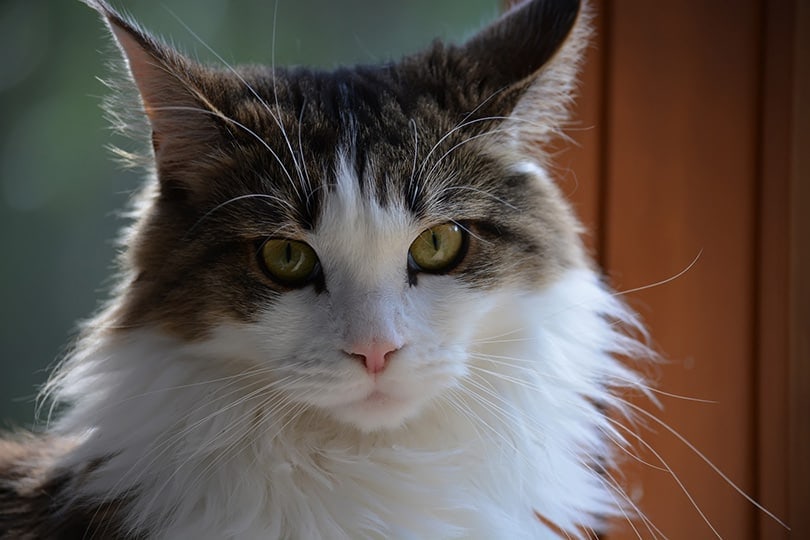 Maine Coons are the largest breed of domestic cats and instantly recognizable due to their distinctive appearance and playful nature.

These big cats can end up maturing to weigh up to 15 pounds, although their long coats can make them look bigger! They have friendly and gentle natures and are known for retaining a sense of kitten-like curiosity and exuberance well into adulthood.

They’re also one of the most popular cat breeds in the U.S.A., coming in fifth place, according to the Cat Fanciers’ Association. If you’ve been considering adding a Maine Coon to your family, you might be interested to find out more about other cat breeds that share their awesome characteristics.

We’ve rounded up 15 cat breeds that are similar to Maine Coons in one way or another. Whether it’s the size, fluffiness, or playful nature of the Maine Coon that appeals, there are plenty of other breeds with similar attributes. Who knows, you might just fall in love with one of them as well!

The Norwegian Forest Cat is a natural breed with a thick double coat and a long, bushy tail. These chunky cats are well-muscled and powerful. They have outgoing and playful personalities, always seeking out human company and looking for adventure. Unsurprisingly, given their origin in the deep forests of Norway, they have a love of finding high spots to watch the world go by. This breed is sometimes affectionately called, “Wegies,” or by their Norwegian name of “skogkatt.”

The athletic Siberian is a natural breed that hails from the subarctic tundra of Russia. They’ve been around for at least 1,000 years and were prized for their great hunting prowess. It’s even thought that they may be an ancestor of the more modern Maine Coon and Norwegian Forest Cat breeds. The dense and long coat of the Siberian is perfect for protecting them from the weather. This playful breed loves their families and they’ll enjoy learning tricks like fetch. They even love water!

The Savannah is a hybrid born from a cross between a domestic cat and an African Serval. As such, they’re quite different from many other cat breeds. They have distinctive tabby coats, often with large spots. They love to learn tricks and play games, but their strong prey drive means they might not suit a household with small pets like hamsters. Their long legs make them excellent jumpers, and they love to sit up high. Unlike many cats, most Savannah cats love to play in the water.

The Ragdoll breed gets their name from the way that they go floppy when held. They have a soft coat in a range of stunning pointed colors. Combine this with their striking blue eyes, and you’ve got a cat breed that’s as stunning as they are sweet. These cats just love the company of humans and will actively seek you out for a cuddle. They’re playful and sweet-natured enough to get along great with kids. Their smart nature means you can also have fun teaching your Ragdoll tricks.

The beautiful Bengal is a hybrid of a domestic cat and a wild breed, the Asian Leopard Cat. This breed is well known for its incredible coats, which have a distinctive pattern including rosettes and marbling. Their coats even sometimes glitter in the sun and have a velvety feel, which is totally different from any other domestic cat breed. They’re incredibly playful, curious, and outgoing. They need plenty of attention from their owners, so they aren’t a low-maintenance choice.

The sociable Birman is a great choice for multi-pet households. They’re not a noisy breed, but they do have an adorable habit of “chirping” when they want to get your attention. They have a medium to long coat in a range of pointed colors, as well as bright blue eyes. Birmans love to play with both humans and other pets. As a sociable breed, they don’t enjoy being left in the house all day without anyone to entertain or cuddle them.

The stunning Burmese shows their Siamese heritage by being vocal and playful. They love to chat with their owners and have an outgoing and playful nature, even with strangers. Burmese cats have a short coat in a range of stunning colors, including blue, champagne, and platinum. These energetic cats love to play and learn new tricks. This breed resulted from a cross of the Siamese with the Burmese Copper Cat.

The Manx cat breed hails from the Isle of Man, where even the people of the island are called Manx. Most Manx cats have no tail, although some cats have a short tail and others have a full-length one. This breed comes in a huge range of colors of almost every shade, except for a pointed coloration. Manx cats are smart, affectionate, and playful. They love adventure and even enjoy going on road trips and playing in the water.

The Abyssinian cat might be small, but they’re incredibly playful and love to learn new tricks. They’re nicknamed “Aby-grabbys” due to their love of taking things that they like the look of! Watch out for any shiny small items, as they’re likely to be carried off. These cats have a ticked coat with individually striped hairs. They love to climb up high, so you’ll need to make sure to provide perches and cat trees to give them places to watch you from above.

The Sphynx is instantly recognizable due to their hairless bodies and huge ears. While they might not have hair, their skin comes in a wide range of colors, including red, blue, cinnamon, and lavender. These sociable cats are vocal and love nothing more than spending time with their families. They don’t enjoy being left alone all day while you’re at work. These sweet cats are playful and inquisitive, but their favorite thing is plenty of cuddles and attention.

The Turkish Angora might just be the most extroverted cat breed we’ve ever met. They’re most happy in a multi-pet and busy household where there will always be someone to entertain them or to be entertained by their playful antics. They might enjoy being silly but they’re also extremely graceful. They love to learn new tricks and will even be happy to complete a mini agility course with jumps and tunnels, as long as there’s plenty of praise afterward!

The stunning French Chartreux cat breed comes in a range of beautiful blue shades, ranging from a dark slate color to a light ash blue. These cats are playful and inquisitive but also gentle and loving when they decide to have a rest. Legend says that they’re named after the Chartreuse drink brewed by monks, and the original cats were selectively bred, with the quiet cats favored over louder ones. This was so that the monk’s meditations weren’t disturbed by meowing!

The Bombay cat loves to be the center of attention, so be sure you can give them the dedication that they need! These noisy cats will soon let you know if they think you’re ignoring them. They’re energetic and playful but are equally happy to curl up and take a nap in the sun once they’re tired of playing. The Bombay usually comes in one stunning coat color, and that’s jet black. Occasionally, sable kittens are born due to a recessive gene, but not all breed associations accept them.

These chunky and longhaired cats look much like a bobtailed wildcat, but don’t be fooled by their appearance! This breed is devoted to their families and has a dog-like character, which means they love playing games like hide-and-seek or fetch. They’re often happy to come on walks and can be trained to walk on a leash if necessary. Their coats come in a wide range of colors. These confident cats are happy to live in a household with other cats, dogs, and children.

The Ocicat is the only domestic cat breed to have distinctive spots, and they were selectively bred to look like a miniature wild cat. Their coats can come in a wide range of colors, including cinnamon, blue, chocolate, and silver. All will have distinctive spots, though! This playful breed craves human company, so they will never be far from their owners. They also get along well with other pets. Ocicats can easily be trained to learn tricks, walk on a leash, and even play fetch.

Cute, cuddly, and super calm, Ragdoll cats make excellent kitty companions for almost anyone. With fluffy fur and a docile…
The category

Walmart might be one of the best one-stop-shops for all of your needs—including pet food. Now, there are cat foods…
The category

If you’ve ever stood outside your door calling your outdoor cat and waiting for them to come home, then you’ll…