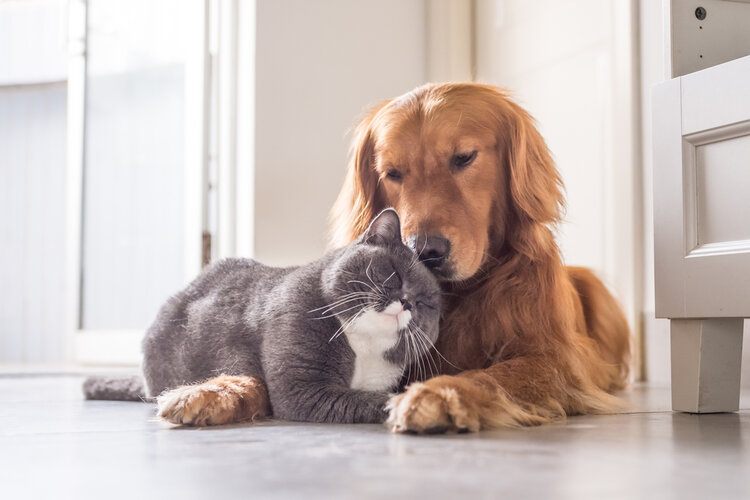 If you’re already a dog parent but would love to add a cat to your brood, then it makes sense to choose a breed known for their ability to get along with dogs. Some cat breeds are totally happy living in a household with dogs and will even play with them, snuggle up for a nap, and even sneak the odd bite of food from their bowl!

We’ve put together this list of the top 13 cat breeds that will thrive in a multi-pet household. One of them is bound to be the perfect addition to your household.

Abyssinians love to explore everything and everyone, and their confident nature means they enjoy spending time hanging out with dogs as much as humans. You won’t find an Abyssinian trying to snuggle up on your lap, but they are sociable and super intelligent.

The sweet and sociable Birman makes a great companion for your dog when you’re at work. They might look soft, sweet, and a little fancy, but Birmans are also playful and a little mischievous. You might even find your animals ganging up on you!

American Shorthairs are laidback and confident cats, making them perfect partners to get along with dogs. They’re sociable and playful, so once they’ve been introduced to your dog correctly, you should find that they both enjoy hanging out and playing together.

The distinctive Bombay cat is an assertive and active breed that loves to know exactly what everyone in the house is doing, including the dogs. You might feel that you need to ask your Bombay cat permission before doing something! They’re loyal cats and will bond strongly to their human and canine companions.

The huge Maine Coon is famed for their playful personality, so they’re a great choice of breed to live with dogs. They love to play games, go for walks, and are often said to share many characteristics with dogs. They even love water!

Immediately recognizable due to their short bobbed tails, Japanese Bobtail cats love to be right in the middle of whatever’s happening in your house. They can even be taught tricks like fetch and high-five and will have great fun interacting with doggy companions.

Ragdolls share many characteristics with dogs. They love human attention and will seek you out to spend time with you and your other animals. They’re laidback and love cuddles but will also enjoy spending time with the family dog and have even been known to curl up for a nap with them.

The Norwegian Forest Cat is still considered a rare breed in the U.S.A., but they share many similarities with the Maine Coon. These relaxed cats get along great with dogs, but if you can, it’s best to introduce them as young as possible.

Tonkinese cats don’t just love attention, they need it! They don’t enjoy being left home alone, so having a dog companion could just be the answer if you need to go out for a few hours every day. They also love learning games and playing fetch and will be vocal if they think that you’re not paying them enough attention.

The chunky Siberian cat doesn’t let anyone push it around, and that includes dogs! You might find your Siberian cat ends up being the boss of the whole household, pets and humans included! These large cats can grow up to 18 pounds. As a rare breed, you may need to shop around to find a reputable breeder if you’ve fallen for this large and fluffy breed.

The calm British Shorthair doesn’t let much ruffle their fur, and that includes dogs. They’re not as playful as some of the other breeds in this list, so you might not catch them chasing a ball around the house, but they certainly won’t mind sharing their space with a dog or two.

The Turkish Van breed is unusual in that they love playing in and around water. They’re even known as “swimming cats” in the area of Asia that they originate. Their laidback attitude means they’re more than happy to share their home with one or more dogs.

The affectionate and assertive Turkish Angora won’t take any funny business from a dog; in fact, they’ll make it clear that they’re in charge! This breed is sociable and outgoing, making them the perfect companion for playful dogs.