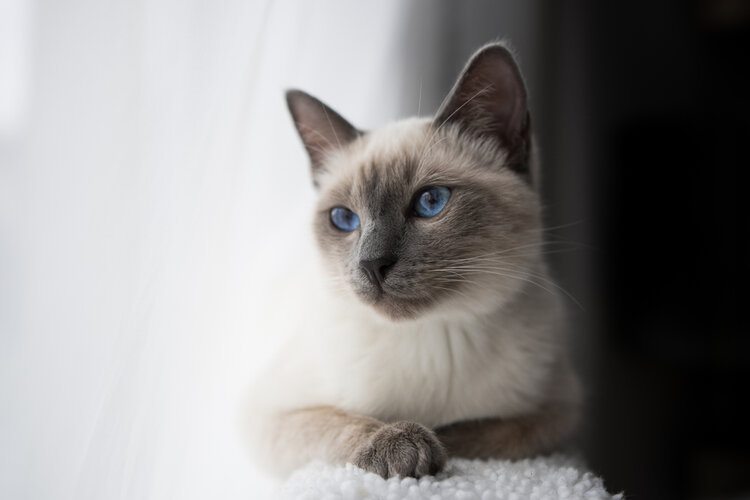 You might love the beautiful color-pointed coat of the Siamese but want a breed that’s a little more laidback and a bit less vocal. Or maybe you’d love a color-pointed cat with a stunning longhaired coat instead.

The good news is that the pointed coloration that makes Siamese cats so distinctive is also found in plenty of other breeds. Let’s take a look at the top 10 cat breeds that look like Siamese cats but aren’t! No matter what coat type or personality of cat you’re after, our list includes something for everyone.

The Balinese breed is thought to have occurred as a natural mutation within the Siamese, although now they’re considered separate breeds. Balinese cats have medium length, soft coats and the same wide range of color-point combinations as Siamese cats. They are intelligent and loud and love spending plenty of time with their human companions.

The beautiful Birman is a gentle and affectionate color-pointed breed, with stunning coats in a medium to long length. They also have white paws that contrast with their darker legs. The Birman breed is descended from temple cats and is used to being both adored and pampered by the humans lucky enough to share their house!

If you love those classic Siamese colors but would prefer a more docile personality, the sweet Ragdoll could be the perfect breed for you. Ragdolls are gentle, laidback, and affectionate. These chunky cats love nothing more than hanging out with their families and get along well with other pets too.

The Tonkinese is a fairly new breed and was originally known as the “Golden Siamese” before having their name changed to “Tonkinese” in 1971. These cats have a medium-length pointed coat. It’s said that their personality is something of a blend of the Burmese and Siamese breeds.

The Himalayan is similar to the Persian breed but has a color-pointed coat. These strong and muscular cats are nicknamed “Himmies” and make gentle and laidback companions. They’re well suited to life as an indoor cat, and while they love attention, they won’t demand it like a Siamese would! Their long coats need a great deal of grooming to stay in pristine condition.

The Devon Rex breed has a distinctive wavy coat, which can have the pointed coloration in some cats. These cats also have huge ears and large eyes, making them incredibly distinctive. They’re playful and affectionate, and their low-shedding short coat is perfect for allergy sufferers.

Another breed with a close, wavy coat is the Cornish Rex. They might be lithe and athletic, but these cats are surprisingly chunky to pick up. If a Cornish Rex wants attention, they won’t be afraid to demand it. They have a playful personality and can easily be trained to play games like fetch, as well as learn tricks like high five and sit.

The Munchkin breed is a little controversial due to the fact that they have shorter legs than normal. As a recent breed, it’s not known if this carries health issues, and the Munchkin is not accepted into many breed registries. Despite this, they are outgoing and friendly cats that don’t seem to care at all that they might be a little shorter than the average feline.

The chunky Exotic Shorthair comes in all sorts of colors, including the pointed pattern. They’re affectionate and love human company and enjoy playing games with their toys in between a good nap. They have thick and dense coats and flat faces. These sweet cats are one of the most popular shorthaired purebred breeds, for good reason!

These sweet and attentive cats are a great choice if you want a loyal cat breed that loves to follow their owners everywhere. They also love food and have a tendency to try and trick all members of the house into feeding them again, so you need to keep a close eye on their rations! These intelligent cats are also easy to train and love to learn tricks.

There are so many amazing things to celebrate when we think of Spanish culture. A few of the most obvious…
The category

Are Orchids Toxic to Cats? What You Need to Know

Some houseplants can be poisonous to cats. If you want to have a house full of greenery but also have…
The category

When our cat first started acting erratic, we weren’t sure what was going wrong. She seemed restless, chewing and scratching…