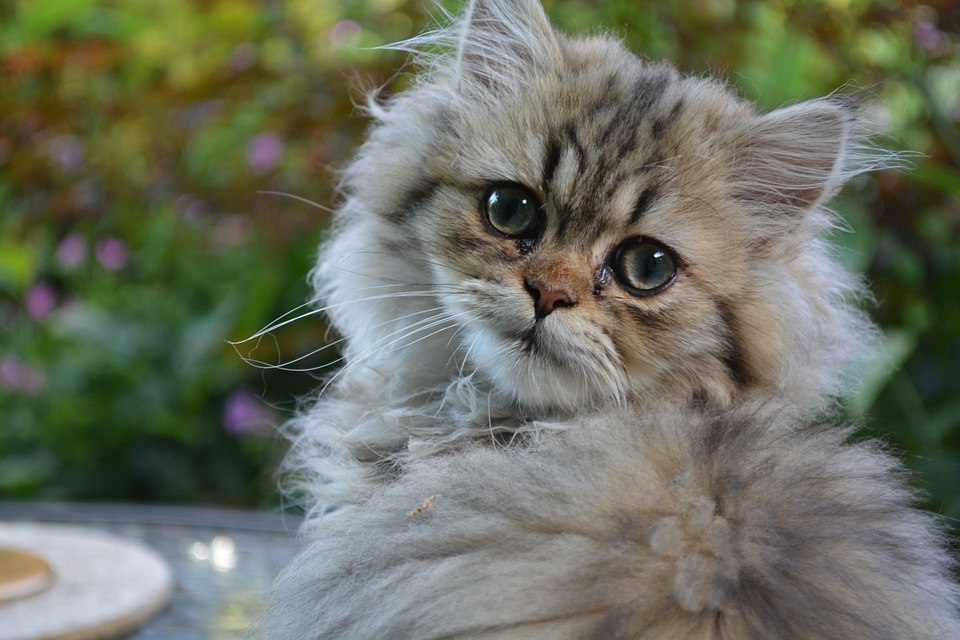 Most people like kittens, and anyone whos owned one probably wishes they could stay kittens forever. They are usually a little cuter and a little more playful than their adult counterparts. While you can’t prevent your kitten from maturing, several breeds are small enough to make you think you did.

Join us while we look at 15 different breeds that stay small like a kitten.

Here are the fifteen breeds we’ve found to share with you.

The American Curl cat breed started around 1980 and is easily recognizable by its curled back ears that give it its name. These cats usually weigh between five and ten pounds and have soft, silky hair that lies flat against the body. They enjoy being around their human owners.

The Balinese cat breed is a long-haired Siamese cat. These cats are known for their sapphire blue eyes and a distinctive plumed tail. These cats like being around people and are very vocal. They are also very smart and curious. Balinese cats typically weigh between 5 and 9 pounds.

The Bambino is a mixed breed, created by mixing the Sphinx with the Munchkin breed. The Bambino has short legs, large ears, and is usually hairless. First recognized as a breed in 2005, so it’s a relatively new cat. These cats require bi-weekly baths and a warm place to hide, and they typically weigh between 5 and 10 pounds.

The Cornish Rex is a hairless cat that has a down coat that gives it it’s color. The Cornish Rex began in the 1950s, and the Rex term designates a curly coat. The males are slightly larger than the females and generally range from 5 to 10 pounds.

Dwelf cats are another mixed breed, created by mixing the American Curl, Sphinx, and Munchkin breeds. These cats are hairless, with short legs and curled back ears. They have muscular legs, a long thin tail, and typically weigh between 4 and 7 pounds.

The Egyptian Mau is considered a rare breed and is one of the few naturally spotted cat breeds. The spots only appear at the tip of the fur, and it appears to be standing on tiptoes when walking. The Egyptian Mau is the fastest of all domestic cats, and besides its spots, it is easily recognizable by its green eyes. It usually weighs between 8 and 10 pounds.

The Minuet cat breed is also known as the Napolean breed. It’s a relatively new breed that began in 1996 and is a mix between a Persian and a Munchkin, and it retains the short legs of the Munchkin. It’s affectionate and loves to play. This breed usually weighs between 5 and 9 pounds.

The Munchkin breed or Sausage Cat is a relatively new breed that began as a genetic mutation and is considered a dwarf cat. This breed has very short legs and is outgoing and intelligent. This breed is too young to know what its health profile looks like, but it typically weighs between 4 and 9 pounds.

The Oriental Shorthair is a close relative to the Siamese cat, but with more color variations. It has almond eyes and a wedge-shaped head. Its ears are large, and it has a muscular body. They are active, curious, and usually weigh between 8 and 12 pounds, making them one of the larger cats on this list.

The Scottish Fold is a cat breed that is easily recognized by its small ears that fold forward, giving it an owl-like appearance. It’s been around since 1961, and due to its loving nature, that’s uncharacteristic of most cats, it’s hugely popular and sought after. Scottish folds usually weigh between 6 and 13 pounds.

The Siamese cat is one of the first instantly recognizable cat breeds and is easy to identify by their short hair, small head, mostly white body, and one or two blue eyes. Some early writings depict the Siamese cat as early as 1351. It’s an affectionate and intelligent breed that often bonds to a single companion. It usually weighs between 6 and 12 pounds, with the majority weighing less than 8 pounds.

Singapura cats originated in the mid-70s and are considered one of the smallest cat breeds. It is an active and intelligent breed that can fetch a high price. They usually have small dark brown marks over a tan or ivory-colored fur. Singapura usually weighs between 4 and 6 pounds.

The Sphynx is a hairless cat developed in the 1960s. The skin feels like soft leather, and there may or may not be whiskers and down fur. It has a wedged shaped head, webbed feet, and its skin is the color its fur would be. The Sphynx loses body heat quickly and will require a warm place to rest.

The Turkish Angora is an ancient breed with long hair and often have multicolor eyes. It’s usually white but can come in many other colors as well. These cats are very playful, athletic, and protective of their owner. They like high perches and can weigh between 8 and 12 pounds but appear much bigger due to the long hair.

We hope that you have enjoyed reading over our look at the many small cat breeds that may trick your neighbors into thinking you have kittens. The Singapura, Munchkin, and Dwelf are among the smallest, but each kind is unique, and almost all of them are friendly and enjoy being around humans. If you have found it helpful, please share these 15 cat breeds that stay small like a kitten on Facebook and Twitter.

7 Natural Home Remedies to Stop a Cat From Licking Everything

Cats primarily lick themselves to stay clean. They also lick one another as a means of bonding, and this bonding…
The category

Thai vs Siamese Cat – What’s the Difference? (With Pictures)

Siamese cats and Thai cats are quite similar, and many people confuse the two. While both breeds can trace their…
The category

Naming your new feline is an exciting part of bringing them home. Whether they are brand new kittens, or a…