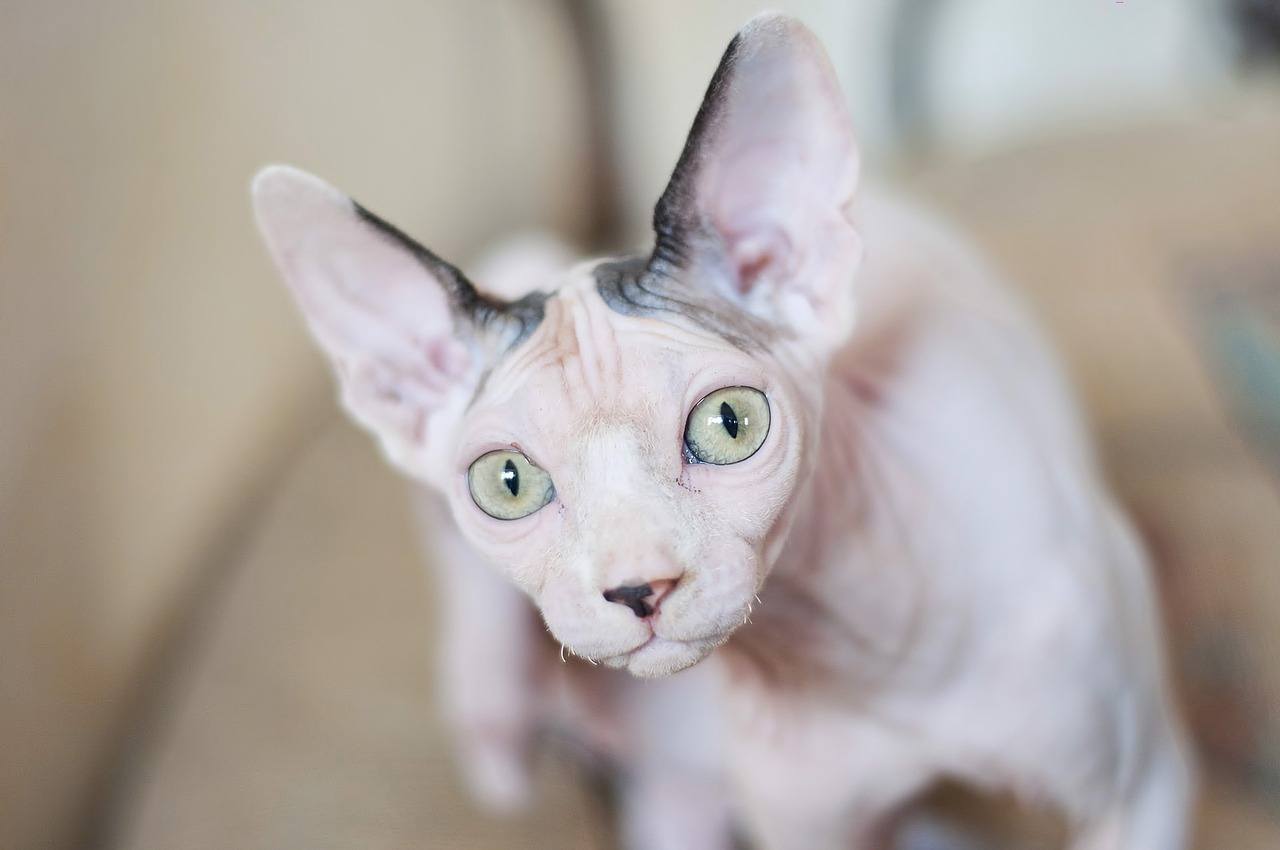 Cats breeds with large ears have a wild look that reflects their big-cat ancestry, and this unique trait makes domestic cats with big ears more popular than ever. In the wild, these oversized ears perform an important function, allowing the cat to hear even the smallest of sounds while hunting for prey.

There are many aspects about cats that make them adorable pets: their soft fur, long tail, and of course, their all-knowing eyes. But arguably, at the top of the list is their ears, and the bigger they are, the cuter they are. We put together this list of 20 cat breeds with big ears so you can see them in all their adorable glory!

The 20 Cat Breeds With Big Ears

The Siamese is one of the most recognizable breeds of Asian cat and is one of several breeds that are native to Thailand. They are long, slender, and elegant cats with smooth coats that are usually a mixture of chocolate, cream, and black. The Siamese is an intelligent cat and highly affectionate with their owner. With such long and slender legs, body, and tail, it comes as no surprise that the ears appear even larger than they are!

The Sphynx breed is most widely known for its coat — or shall we say, lack thereof! Hairless cats in general will have large ears, and the Sphynx is no different. Hairlessness in cats is usually a result of a naturally occurring genetic mutation, but the Sphynx was developed through selective breeding to have no hair. These cats are in high demand and are thus rare and expensive, and with their large ears, they make for a highly unique and eye-catching cat breed.

A breed of domestic cat often referred to as the “Greyhound” of cats, the Cornish Rex has a coat that is unique among cat breeds. Their fur is short, soft, and silky, forms in waves along their body, and consists of almost exclusively undercoat. This soft, curly coat is prone to hair loss, and these cats eventually lose most, if not all, of their hair.

The cousin of the curly-haired Cornish Rex, the Devon Rex is similar in appearance, but their coat is caused by a different genetic mutation, making them an entirely different breed. They are often referred to as “alien” cats due to their unique appearance, which is accentuated by their oversized, rounded ears that sit uniquely low on their head. Another unique feature is their whiskers, which are so short and curled that it often appears as if they have none.

Both the Shorthair and Longhair Orientals have characteristically long ears and are closely related to the Siamese. They are social, playful, and often vocal cats, characteristics that they share with their Siamese cousins. The main differentiator is their coats, which can appear in a wide range of colors and patterns. Their genetic roots are in Thailand, and the breed has since become one of the most popular among Cat Fancier Association members.

With their sapphire blue eyes and distinctive point coloration, the Balinese have much in common with their close cousin, the Siamese. Indeed, the Balinese is commonly known as the purebred long-haired Siamese, as they originated as a natural mutation of the breed, with the only real differences being their longer coat and fluffy tail. They were initially known as Long-Haired Siamese cats, but the original breeders felt that this was too long-winded and subsequently shortened the name to Balinese.

These large-eared and short-haired cats were believed to have first been developed in Abyssinia, where they got their name. Their unique coat is known as a “ticked” tabby coat, where the individual hairs are banded with different colors. Their large ears also have unique tufts that emerge from the pointed tips. They are active, playful, and highly affectionate felines that are known to be vocal, with a unique bird-like trill.

The Ocicat is a domestic breed that you’d be forgiven for thinking has wildcat genetics hiding somewhere. It has no recent wild DNA, however, and while its spotted coat certainly gives it the appearance of a wild animal, its calm and docile temperament gives away its domesticity within minutes. It gets its name from its resemblance to the Ocelot, a small wildcat native to North and South America.

The Savannah is a cross between a domestic cat and a medium-sized, large-eared African cat called a Serval. This uniquely beautiful breed was first registered with The International Cat Association in 2001 and has become increasingly popular. Despite their wild heritage, they are friendly, sociable animals that are known for their loyalty, often following their owners around the home. These highly intelligent cats are known to open doors and cupboards on their own, so be careful where you hide their food!

The smallest breed of domestic cat, these micro-sized felines are known for both their over-sized ears and large eyes. They have a beautiful ticked coat that is typically a few variations of brown, and they rarely get bigger than 8 pounds. They are active, playful, and curious and love to be in high places to get a birds-eye view of their home. There is controversy around their true heritage, but most breeders agree that the cat hails from Singapore, where they got their name.

This domestic cat breed certainly has a wild appearance that is further enhanced by their large ears, and they were actually derived from breeding a few species of wild jungle cats with domestic varieties. The kittens closely resemble lion cubs, with their deep chests and high-set large, round ears. They are intelligent, active, and playful cats that retain a lifelong curiosity for their surroundings.

The Egyptian Mau is one of the few naturally spotted breeds of domestic cats. They are medium-sized, with medium-length, beautifully patterned coats. These cats are a rare breed, with fewer than 200 kittens being registered every year. They have a characteristic “scarab beetle” or ”M” marking on their forehead and usually have distinctive green eyes and of course, large pointed ears. These cats are particularly sensitive to anesthesia and medicine.

One look at the Russian blue, and you can tell precisely where they get their name. They have a distinctive blue coat that can range from sliver blue to deep blue and grey. Their stunning coat is usually short and coarse and stands out stiffly from their body. They are known for being friendly and highly intelligent but are also somewhat reserved and tranquil, preferring to explore their surroundings with their curious nature than playing.

Known commonly as one of the hairless cat breeds, the Peterbald is also found with unique variations in their coat. These variations include “brush,” “flocked,” and “velour,” but complete hairlessness is preferred among breeders. They are playful cats that love attention and are generally affectionate with their owners. These felines have a high metabolism and may require more food than coated breeds.

The Donskoy is a hairless breed of Russian origin, also known as the Russian Hairless or Don Sphynx. They are similar in appearance to the Sphynx Cat but are not actually related, and their hairlessness is caused by a dominant gene mutation as opposed to the recessive mutation of the Sphynx. They are medium-sized, muscular cats with wrinkly skin and long, webbed toes. They are often considered a cat that acts like a dog, as they are fiercely loyal and attached to their owners.

­A cross between the Sphynx and Munchkin cat breeds, the Bambino is a new and controversial breed due to the crossbreed’s increased chance of health issues. The first litter was registered in 1995, so little is known about the breed. They are usually hairless, but not always, and inherit the oversized ears of their Egyptian parents.

These cats are unique in more ways than one. In addition to having large and over-sized ears, the ears typically fold inward, similar to some dogs. The Ukrainian Levkoy is also usually hairless, with a long body and muscular frame. They also have soft, elastic skin that will wrinkle in excess, large round eyes, and an angular head. All these characteristics make the breed appear more like dogs than cats, and their sociable and playful nature further emphasizes these traits.

Characterized by their bright blue eyes and “snow boot” paws, the snowshoe cat closely resembles a Siamese cat wearing white boots. The breed is rare due to the difficulty in producing the desired markings, which are created due to recessive genes that make it difficult to predict the outcome of kittens. They do share the Siamese’s affectionate temperament, docile nature, and of course, large, rounded ears.

Also known as the Colorpoint Longhair, the Javanese is an offshoot of the Balinese that does not follow the required and strictly defined point coloration (darker extremities and face and light body) of the Balinese. They typically have a long and silky coat in a wide variety of colors and patterns, including tabby and tortoiseshell. They share the same trait of vocalization of their Siamese ancestors and are known to be playful, intelligent, and affectionate.

The Korat is one of the oldest stable cat breeds and is usually short-haired with a stunning blue-grey coat. They are often confused with the Russian Blue as they have a similar coat and green or amber eyes, but the Korat has a distinct heart-shaped head. The Korat is believed to be a good luck charm in their native Thailand, where they are commonly known as “Si-Sawat,” meaning “good fortune.” They are highly intelligent cats that form strong bonds with their owners.

We totally understand how exotic a beautiful tiger stripe looks on a kitten’s coat. If your cat has stripes, this…
The category

Can Cats Eat Peaches? What You Need to Know!

Peaches are one of the sweetest and most delicious natural treats there are. Curious by nature, you may notice your…