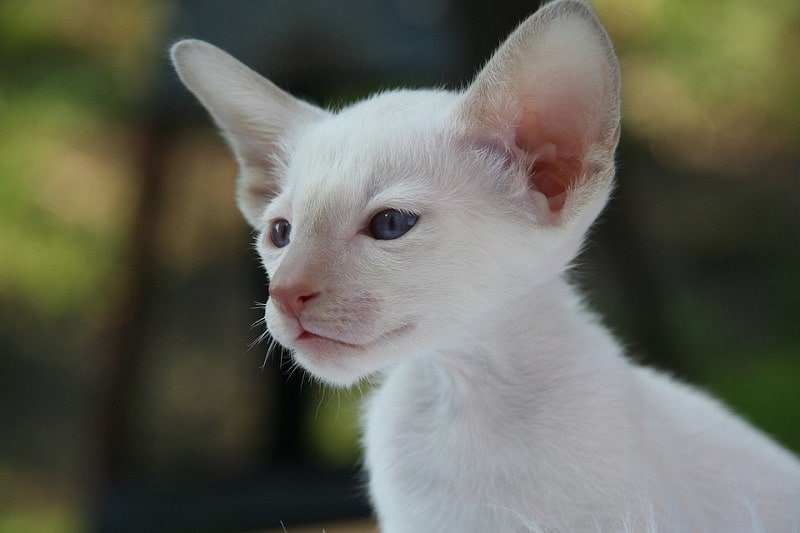 Cats are gorgeous animals that come in a wide variety of colors – in their fur as well as their eyes. Blue-eyed cats are particularly striking because they are rarer in the cat world and who can resist those baby blues?

All kittens are born with blue eyes that will change into a permanent adult color (usually amber, green, orange, or copper) at about 6 weeks of age when melanin occurs (melanin is the pigment that determines eye color). The less the melanin, the lighter the eyes, and therefore, cats with blue eyes have very little melanin.

Pointed cats (such as the Siamese) have a recessive albinism gene, which is why these breeds always have blue eyes. However, other cats have an extra gene that blocks the fur’s color, so they have white coats and blue eyes. Unfortunately, many of these cats with this gene tend to be born deaf.

So, here are 13 cat breeds that have beautiful blue eyes, in alphabetical order:

The American Shorthair started as a house cat in England and was used as a mouser, which brought it to North American shores. They were able to control the rodent population on the ships traveling with pilgrims in 1621 and eventually became the American Shorthair.

The American Shorthair is known to be calm and generally quiet and is one of the best lap cats around. They come in a wide variety of colors (as much as 80!) and patterns. While these cats are not solely blue-eyed like most of the cats on this list, the American Shorthair can have eye colors in gold, hazel, green, and yes, blue.

The Balinese is actually related to the Siamese cat and was initially called the “Longhair Siamese” before it was named “Balinese” by Helen Smith in 1950s New York. She named these cats after the graceful dancers of Bali, Indonesia.

Just like the Siamese, the Balinese loves to talk! They are smart cats known for their easy-going and friendly natures and tend to get along with all animals and people. As with all pointed cats (this refers to point coloration, which are cats with pale bodies and darker fur at their extremities, such as the face, ears, tail, and feet), the Balinese has slanted eyes in a distinctive blue color.

Another relative to the Siamese, the Colorpoint Shorthair was bred from combining a red tabby American Shorthair to a Siamese. This occurred from the 1940s to the 50s in order to create a red colorpointed Siamese cat.

These cats are chatty like the Siamese and are very sensitive, intelligent and love attention and affection. The Colorpoint Shorthair comes in various colors other than red and might even sport some tabby-like stripes. Like all of the colorpointed cats, they have beautiful almond-shaped blue eyes.

The Birman has also been called the “Sacred Cat of Burma” and has a rather fantastic origin story steeped in mythology, but it was believed that they were sacred cats that were companions to the Kittah priests. They arrived in France in the 1920s and were given the name Birmanie (which means ‘Burma’ in French), shortened to Birman.

They are intelligent cats that seek love and affection and are gentle and calm. The Birman is also colorpointed, and usually has white paws and is commonly gold in color. Their big round eyes are always blue.

The first true Himalayan was first bred in the early 1930s in the United States as a way to create a Persian cat with Siamese coloring. They have been called “Colorpoint Persians” but were named after the rare Himalayan rabbit that is also colorpointed.

The gentle Himalayan is a playful and sometimes mischievous cat that loves to be doted on and will form a strong bond with her owner. They tend to be medium or large in size with long thick fur colorpointed like the Siamese. The Himalayan has beautiful round and large striking blue eyes.

The Javanese is exceptionally vocal and will want to chat with you when happy or frustrated. They are very intelligent and loyal and love attention. They can be red, tortie, seal, and cream in color and have those beautiful blue eyes.

The Ojos Azules (which translates to “blue eyes” in Spanish) originated in New Mexico in a feral colony of cats. They used to be recognized by The International Cat Association in 1991 but not any longer as breeding these cats is extremely difficult, and therefore they are extraordinarily rare.

Due to their rarity, not much is known about the personality of the Ojos Azules, but they are considered affectionate, energetic, and friendly cats. They have short, shiny coats that come in a wide variety of colors, but they usually have white markings on their paws, muzzle, and the tip of the tail. And clearly, from their name, they have large, round vivid blue eyes.

It is thought that the Persian cat was named after the country from where it originated and that they were brought over from Persia to Europe in the 1500s.

These cats love to just lie around but are also playful, intelligent, and enjoy a good petting session. They are known for their long, thick coats of fur that come in a huge variety of colors (at least 80) such as silver, blue, cream, and black. The Persian is another breed like the American Shorthair that doesn’t just have blue eyes. They have copper, green, hazel, and can be odd-eyed (usually one eye is blue, and the other is typically yellow, brown, or green).

The Ragdoll has some crazy stories surrounding its origins, but the most likely history of this breed comes from Ann Baker in 1960s California, who crossed a Persian with a feral, long-haired tomcat, which produced the Ragdoll.

They are very calm, even-tempered, and sweet cats that can be very affectionate and docile. The Ragdoll is a large cat with long, silky fur that can be colorpointed and have mittens. They have oval eyes that are an arresting blue.

The Siamese is one of the most recognizable and well-known cats around. They originated in Thailand (which used to be called Siam) hundreds of years ago and were named “The Royal Cats of Siam” as only the royal family were allowed to own them.

Siamese cats are very talkative, sensitive, and social cats that need to be around their humans most of the time. They come in four different colors, which include chocolate, blue, seal, and lilac point. Their large ears and big, beautiful blue eyes are what makes the Siamese such a distinct and striking cat.

The Tonkinese is the result of a cross between the Siamese and Burmese cat breeds by Canadian breeder Margaret Conroy in the 1960s. They are named after the Gulf of Tonkin even though they have no affiliation with it.

They make great lap cats and enjoy romping around the house, are extraordinarily playful, and are chatty like the Siamese. They can be solid in color, like the Burmese or pointed like the Siamese, and are commonly mink in color and coat texture. The eye color of the Tonkinese is dependent on the pattern of the coat; if the cat is mink, they have aqua eyes, pointed cats have blue eyes, and solid coats have green eyes.

Turkish Angoras are a natural breed that originated in central Turkey as far back as the 1600s. They were eventually introduced to North America in the late 1700s.

They are smart cats that are playful and affectionate but do not like to be held for long periods and aren’t lap cats. They have long silky coats that come in a variety of colors and patterns but are most well known for their white fur. They also have a number of eye colors such as copper, gold, green, odd-eyed, and of course, beautiful blue.

The Turkish Van originated many centuries ago from the Lake Van area of Turkey and arrived in Europe around 1095 to 1272 A.D. They gained recognition through photographer Laura Lushington’s breeding of two Van cats in 1955, where she realized they were purebred.

The Turkish Van is an energetic cat that enjoys looking down on everything from high places and might enjoy swimming from time to time. They have medium-length soft fur, usually white on the body and darker coloring on the head and tail, which has a ring pattern. The Van has amber or blue eyes and sometimes is odd-eyed between the two colors.

Well, there you have it. A group of gorgeous cats with blue eyes that have their own unique looks and personalities. Hopefully, you’ve felt inspired by our list, and maybe your next cat will be a blue-eyed beauty.

Can Cats Eat Mayo? What You Need to Know!

If you wonder if it is safe to give your cat mayonnaise, the short answer is yes. However, there are…
The category

Big cats need their space. A good cat tree can satisfy your feline friend’s desire for space, as well as…
The category

There’s nothing as cute as a kitten cuddling up for nap time. When your little ball of fluff gets cozy…