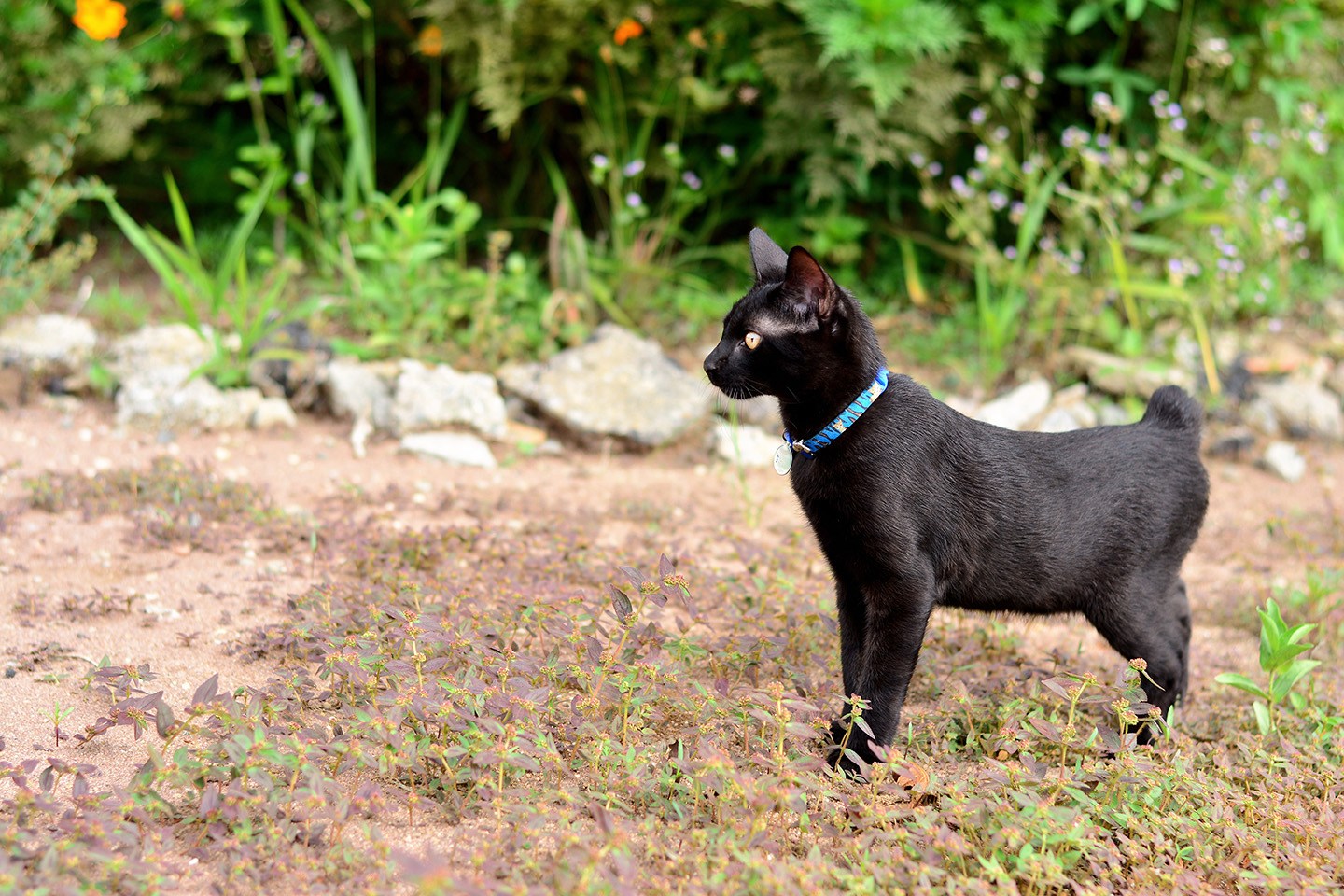 It may seem impossible to imagine a cat without a tail. After all, it’s such an integral part of their communication. Think of a cat slowly swatting her tail as a warning to another cat or dog to stop whatever they’re doing that is annoying her. She slaps it harder and harder as the tension mounts. Then, there is the frightened feline with the puffy tail.

She doesn’t have to mew or yowl for you to know that something is wrong.

Cats also use their tails for balance when jumping tree to tree—or onto the counter where she knows she’s not allowed. You’d think that one without this appendage would have a difficult time with both of these functions. However, felines born this way manage to get along well, despite the lack of a tail. While it’s not common, there are several breeds that are tailless.

The American Bobtail isn’t tailless, technically. As her name implies, there is instead the short stump of a tail. In many ways, she resembles the Bobcat. This feline is large, weighing in at up to 16 pounds as an adult. Her fluffy coat makes her seem even bigger. This one loves to play and will quickly get bored without something to do. She is also very affectionate.

The Japanese Bobtail is an ancient breed with a history that goes back hundreds of years. Like our previous feline, her tail is short and a distinguishing trait between others like her. She is an active cat that craves attention. She is even willing to share her love with strangers and dogs. This one is also intelligent and needs to play to stay happy.

The Kurilian Bobtail origins are from Russia from at least 200 years ago. They are rare in the United States. Some experts believe she is related to the Japanese Bobtail because of their similar appearance. She is a friendly cat that even will tolerate both children and dogs. This feline is a hunter at heart and will quickly manage a rodent issue.

The Manx is an adorable cat, in part because of her rounded body shape. The breed’s history goes back centuries to the Isle of Man in the Irish Sea. She is a medium-sized feline with a muscular form. Her good looks caught the eye of enthusiasts early and put her on the show circuit. The Cat Fanciers’ Association (CFA) is the official registry for purebred cats. The Manx was one of the first recognized in 1906.

The Cymric Cat and the Manx are like twins. The former is the longhaired variety, while the latter is the shorthaired one. Like the Manx, the Cymric Cat is an energetic and playful feline. Her double coat is lush and dense, which makes her appear larger than she really is. She is a devoted companion with a keen intelligence that demands mental stimulation to be happy.

The Highlander Cat is the new feline on the block. She has a stubby tail and curled ears that make her look exotic and maybe even a bit wild. She is a cross between the Jungle Curls and Desert Lynx, which accounts for her appearance. Unlike many felines, this one doesn’t dislike water. She is a large and muscular cat that exceeds as a hunter.

As you may expect, there are many myths and legends surrounding tailless cats that range from fantastical to bizarre. The fact remains that they are the result of natural mutations and selective breeding. Nevertheless, these occurrences aren’t common with something as visible as a tail. It only makes them look that much more unique.

Perhaps, cats without tails seem more like wild felines because they resemble animals like the Lynx or Bobcat. Their looks belie the fact that many are affectionate and outwardly friendly toward people and other pets. It’s one of the things that makes them so endearing. They defy the notion that all cats are aloof. On the contrary, they are feline companions.