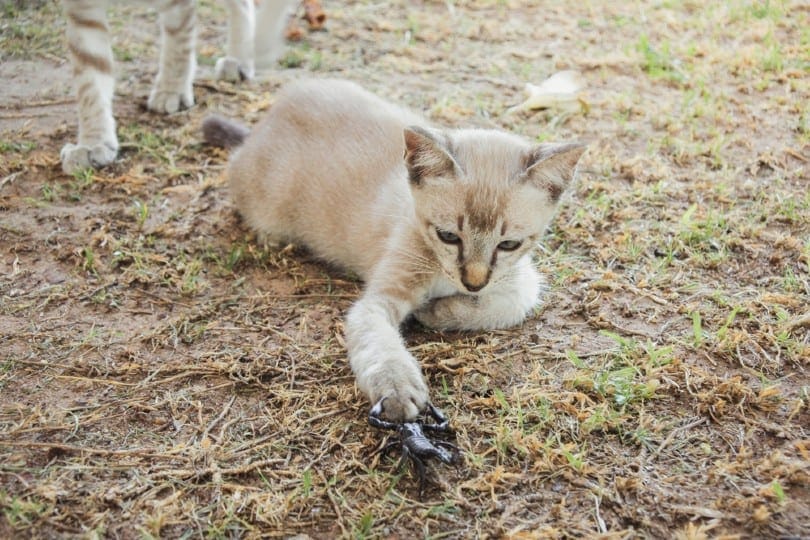 Cats by their nature are hunters, used to stalking out prey and pouncing. In many cases, our feline friends no longer need to catch their own dinner but will still stalk and play with creatures they encounter when out and about. This can sometimes lead them to trouble, particularly if the creature involved is a scorpion. Even housecats may encounter a sneaky scorpion that has got into your home. In most cases your cat won’t be trying to kill the scorpion, however, the scorpion won’t welcome the attention. How do you know if your cat has been stung by a scorpion, and how worried should you be if they are stung?

How do I know if my cat has been stung by a scorpion?

Scorpions have a stinger on their tail and pinchers to catch their prey. The scorpion uses its venomous sting to immobilize and kill their prey. If the scorpion isn’t allowed to retreat your furry friend might get a nasty shock by way of a sting. Most cats are stung on the nose, tail, or paw when chasing or playing with the scorpion. But if you don’t see it happen how would you know they have been stung?

In many cases, a cat will escape actually being stung by a scorpion. A cat rarely accidentally steps on a scorpion in the way a person might. If a cat chases or stalks a scorpion the scorpion will actively retreat and try to escape attack. Cats also have very fast reflexes, and so in many cases can avoid being stung. However, this isn’t always the case, and sometimes the cat is unlucky.

If your cat is stung by a scorpion it is likely to feel almost instantaneous pain. Scorpion venom contains digestive enzymes that cause local irritation and intense pain. Most likely the first thing you will notice is your pet rubbing at the affected area, they may also rub or lick the area, often frantically. If a paw has been stung your cat might start to limp. Sometimes the stinger from the scorpion’s tail will still be present. The area around the sting might be red or slightly swollen.

What are the symptoms of a scorpion sting?

If your cat has been on the receiving end of a sting you might see a range of symptoms, depending on the type of scorpion and the location of the sting.

The signs of a scorpion sting in cats may include:

What should I do if my cat gets stung by a scorpion?

If you see your cat being stung or suspect it has been stung it is important to contact your veterinary surgeon for advice. Prompt advice should be sought to ensure your pet receives timely treatment. If you see the scorpion which might have stung your pet, carefully (and without endangering yourself!) take a quick picture. This might provide your vet with more information; it may be possible to identify which species of scorpion it is. Although it is unlikely to change the treatment given it will be useful information for the veterinarian. In most cases it is likely that your veterinarian will want to check over your cat and decide on the next steps.

If the stinger remains in the cat’s skin this can be carefully removed with tweezers. Whilst awaiting veterinary care try to keep your pet calm and quiet. If possible, wash the area with cool water, and if the cat will tolerate a cold compress this could help to ease the discomfort- a pack of frozen peas wrapped in a clean towel works well!

What happens if a cat gets stung by a scorpion?

It is rare for cats to get stung, as the scorpion will try to avoid encountering your cat and your cat’s reflexes should save them the rest of the time. However, some cats are persistent, or unlucky. Scorpions won’t always release the full dose of venom when trying to warn off your cat, sometimes they will only sting with what is known as the pre-venom. Pre-venom will still cause an irritating painful sting but shouldn’t be too problematic to your cat. In other situations, the cat will be stung fully, and this could lead to more troublesome symptoms.

How serious is a scorpion sting in cats?

All scorpions contain a venomous sting, but not all have the potential to be deadly. Scorpions normally use their venom when hunting insects. The venom is deadly to this small insect prey but is much less likely to be problematic for your cat.  In the overwhelming majority of cases, a scorpion sting will be painful and irritating without causing any serious symptoms, but more serious illness and, very rarely, death can occur.

A rule of thumb when assessing how venomous a scorpion is, look at the tail thickness. Scorpions with a thick tail and thin pincers are normally more of a concern than those with a thin tail and large pincers. However, it is always best to seek prompt veterinary treatment as individual cats may react differently, and most will benefit from supportive care. In rare cases, a more venomous scorpion might be encountered in certain areas of the South Western United States. Although highly unlikely, it is possible that a sting could prove fatal for your cat, particularly if it isn’t taken to the vets straight away.

What is the treatment for a scorpion sting?

Your veterinary surgeon will assess your cat, and the treatment provided will depend on the symptoms shown. If the stinger is still present your vet will carefully remove it from the cat’s skin. It is usually possible to remove the stinger without any sedation or anesthesia, but in fractious cats, it may be necessary to provide sedation for your vet’s safety.

For the most part, treatment will be supportive.

Potential treatment options will vary depending on the severity of the signs and health of your cat but could include:

How can I prevent my cat being stung by a scorpion?

It is impossible to completely eliminate the risk of your cat experiencing a scorpion sting, but there are some steps that may lessen the risk. House cats are at a much-reduced risk of encountering a scorpion, especially if you are able to seal any entry points to the house. During rainy periods be vigilant for scorpions trying to seek shelter in your home. Sealing up any cracks in the windows and exterior doors may prevent a scorpion from entering. If you see your cat playing or chasing a scorpion intervene and remove the cat from the situation. Check areas in the cat’s environment regularly such as shaking out any bedding or towels on the floor which a scorpion could hide under.

Scorpion stings are painful, but they rarely need anything more than supportive treatment. It’s a good idea to call your vet to get their advice, but many cats will be fine with just pain relief once the stinger has been removed. Getting a photo of the scorpion, especially if you’re in an area where extremely venomous scorpions live, can help your vet to decide on the best course of treatment.

Why Does My Cat Lick My Face? 6 Reasons for This Behavior

Kitty kisses can be cute and endearing. But being incessantly licked by a tongue that feels like sand can be…
The category

Fever Coat in Kittens: What Is It? (With Pictures)

Do you have a kitten that seems to have mysteriously changed colors? If so, they may have a fever coat.…
The category

Why Does My Cat Stare at Me While I Sleep? 6 Reasons for this Behavior

Most cat owners can recount waking up on at least one occasion with their cat staring straight at them. It…