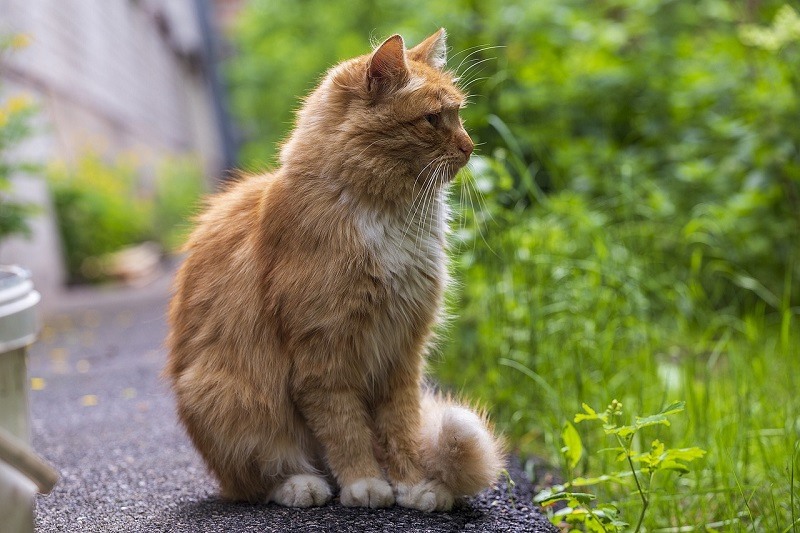 Cats are glorious creatures. Everything about them is wonderful, from their pointy little ears to their sharp little claws (okay, so maybe those not so much).

Our favorite part, however, will always be their tails. Incredibly expressive, these charming little appendages will tell you everything that you need to know about how your kitty’s feeling.

There’s nothing better than a fluffy cat tail. If you agree, you’ll love the shaggy felines on this list, each of which has an incredibly lush, fluffy tail.

The largest domesticated cat breed, Maine Coons have the tails to match. The tail resembles that of a raccoon, right down to the black rings that encircle it.

Their tails don’t sink in the snow, and they can curl around their entire body, helping to keep them warm when it gets cold. Most importantly, though, it makes them look adorable all year round.

The Sacred Cat of Burma, the Birman has a long, silky coat that ends in a thick, fluffy tail. Despite the heft that they carry in their tails, these cats don’t have undercoats, which makes them less prone to matting and shedding.

The breed almost went extinct after WWII, as they were whittled down to a single pair. Luckily, thanks to the work of dedicated breeders, they’ve come roaring back in a big way in recent years.

From their name, you’ll probably guess why the Norwegian Forest Cats need such fluffy tails. In fact, their entire bodies are thick and bushy, and they have waterproof fur with a thick undercoat.

In addition to being quite popular in Scandinavian countries, the Norwegian Forest Cat is the fifth most-owned cat breed in France.

One of the rarest — and newest — of cat breeds, Nebelungs actually originated in the United States. They have long, fluffy tails with fur that’s longer than that on the rest of their bodies. You’ll also find tufts of fur on their ears and between their toes.

These cats tend to be picky about certain things, like the quality of their litterbox. Then again, if you had a tail this majestic, wouldn’t you be protective of it too?

Also known as the “Himalayan Persian,” these cats are similar to their Persian cousins. Two key differences should immediately jump out at you, though: their piercing blue eyes and thick, luscious tails. These cats have round bodies and short legs, and as a result, they can’t jump as high as many other breeds.

However, they make up for their lack of athletic ability with their great beauty. After all, why should they need to jump (other than to prevent you from stepping on their tails)?

The Somali is a descendant of the Abyssinian cat, although its exact origins are unknown. While they have thick fur all over, their bushy tails are especially notable. Their coats are extremely fine, and that makes them softer to the touch than many other breeds.

Their coats have another trick up their sleeve: They can sport up to 20 different colors on each strand of hair. That’s a big reason that these cats are so gorgeous, and we invite you to grab a tuft of fur and a microscope to see for yourself.

LaPerms have long, curly coats (hence the name). The curls aren’t as tight on their tails, however, giving them a thick, bushy appearance.

These cats originated in the United States and are genetically unique, meaning they’re not related to any other rex cat breeds. Many people claim that they’re hypoallergenic, but that’s not been confirmed; still, we can tell you that they shed less than your typical feline friend.

Ragdolls earned their name by going limp whenever being picked up. These are very large cats, often growing up to 20 pounds, and they have the tails to match.

Ragdolls are considered excellent pets for people who don’t like cats, as they follow their owners around, have no issues being handled, and are extremely affectionate. Then again, people who like cats love this breed too.

If you start scanning at the tip of their nose, the Turkish Angora will look like any other cat,  right until you get to their tails. Then, it’s just an explosion of long, fluffy white fur.

These cats are extremely athletic and prefer to perch on the tallest surface in any room. That’s good for you, as it puts their beautiful tails within prime petting distance.

Often mistaken for Siamese cats, the Balinese was actually born from a mutation in that breed. They’re quite similar — except for their silky coats and long, plumed tails.

Another way in which they differ from their Siamese cousins is in their use of vocalization. The Balinese is a quiet pet, and they only talk when they have something to say, presumably, “Hey, look at my tail!”

The flat-faced Persian is genetically similar to the Turkish Angora, which explains why both breeds have such amazing tails. However, Persian tails are longer, with hair that is both fuller and more coarse.

These cats are incredibly easygoing and prefer lounging in your lap to running around the house. They’re a loyal breed as well.

The Fluffier, the Better

While every cat is deserving of love, a cat with a fluffy tail is just slightly harder to resist than their thinner-appendaged counterparts. The breeds listed above are all known for their glamorous back ends, and they’d make great pets for anyone in the market for a fuzzy friend.

Of course, all that fluff might mean you have to deal with more shedding, but that’s a small price to pay for beauty, don’t you think?

Since cats always do their business in the same place, it can be easy to tell when something is amiss.…
The category

How High Can a House Cat Jump? (Highest & Average Jumps)

Some cats are impressive athletes, while others prefer a leisurely nap that takes up most of the day. But most…
The category

Why Do Cats Clean Themselves So Often? 12 Reasons

Cats spend a huge amount of time keeping themselves clean, but have you ever wondered exactly why? If so, you’re…