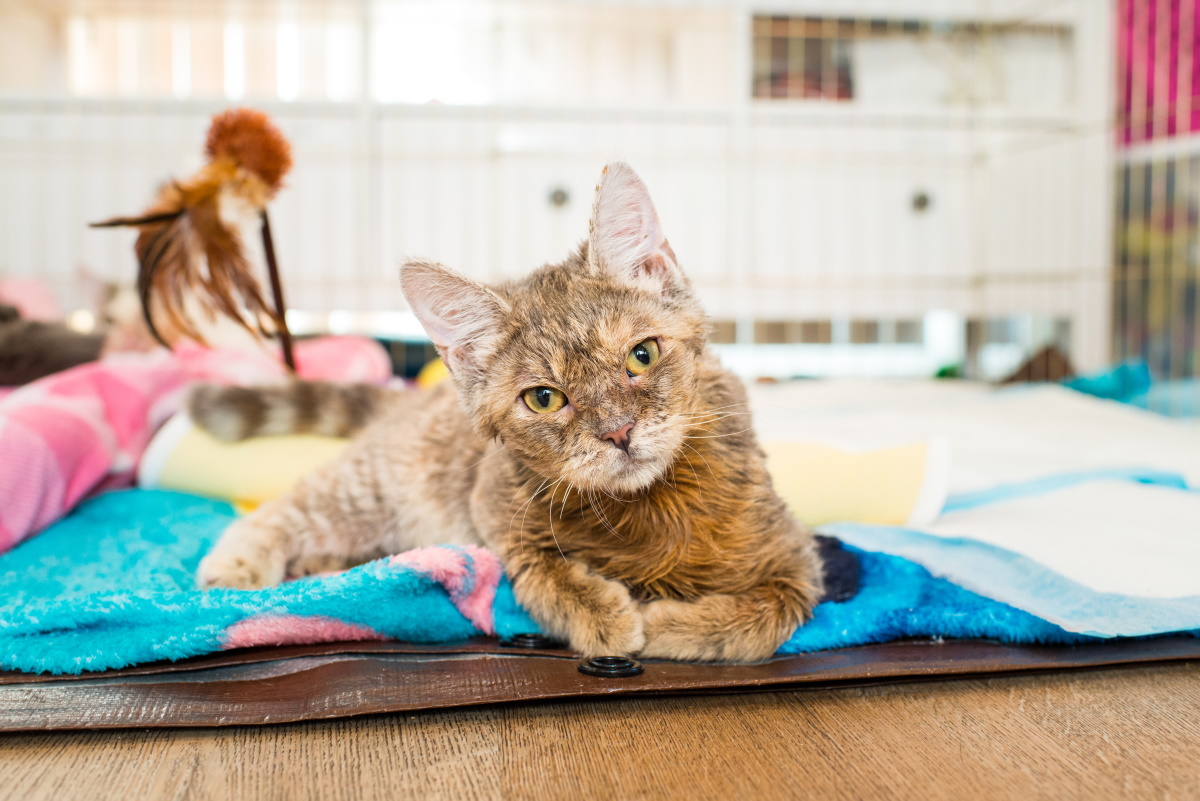 Have you ever seen a cat or kitten that appears ‘wobbly’ and has bad balance? It’s possible that they’re suffering from Feline Cerebellar Hypoplasia, a common congenital condition in cats. In this article, we discuss what cerebellar hypoplasia is, how it affects cats, and what you can do about it.

What is Cerebellar Hypoplasia?

Cerebellar Hypoplasia is a condition that affects all mammals to varying degrees. It’s congenital (present at birth) and incurable in cats.

The name ‘cerebellar hypoplasia’ describes the condition perfectly. The cerebellum is part of the brain – it’s the bit that’s responsible for movement, especially fine motor skills, co-ordinating muscles, and helping with balance. ‘Hypoplasia’ means under-developed. In cerebellar hypoplasia, kittens are born with an underdeveloped cerebellum.

Signs of Cerebellar Hypoplasia in Cats

Since the cerebellum’s function is to control movement, co-ordinate muscles, and balance, affected cats struggle to do these things. They’ll appear ‘wobbly’, and you’ll notice the head bobbing. You might notice small tremors (‘intention tremors’), especially when the cat is deciding to do something – like eat food or play with a toy. These tremors should go away when the cat is resting and sleeping. Cats with cerebellar hypoplasia will exhibit a decreased sense of balance – they may fall over or miss easy jumps.

Other symptoms can include:

Cats can be affected mildly or severely depending on the amount of damage to the cerebellum, which will mean that some or all of the signs and symptoms can be present.

By far the most common cause of cerebellar hypoplasia in cats is infection with feline panleukopenia virus (also known as feline parvovirus). If caught by the mother cat, this virus can pass across the womb to the kittens. It attacks any rapidly dividing cells – and, at critical points in gestation, the cells of the cerebellum are the most rapidly dividing cells in the body.

How is Feline Cerebellar Hypoplasia Diagnosed?

An MRI is the best way to diagnose ‘wobbly cat’ syndrome, as it allows an image of the brain to be created. However, most vets do not have access to specialist imaging equipment and the procedure is often expensive, meaning this step is often missed and a presumptive diagnosis is made.

Caring for a Cat with Feline Cerebellar Hypoplasia

Since your kitten or cat cannot jump or run like a normal cat, they shouldn’t be let outside. There’s a high risk of them hurting themselves if they end up in a difficult situation (like up a tree!).

Once your cat has cerebellar hypoplasia, there’s nothing that can be done to reverse the damage. However, it’s possible to reduce the risk of kittens being born with cerebellar hypoplasia. The most important thing that you can do is to make sure that the mother cat is fully vaccinated before becoming pregnant. This reduces her risk of catching feline panleukopenia virus and passing it onto her kittens. It is not possible to vaccinate cats that are already pregnant. If you find a pregnant stray whose vaccination status is unknown, the best you can do is reduce her chance of catching parvovirus. You should not allow her access to any other cats,

If you have a pregnant cat, it’s important their nutrition is adequate. Since both underfeeding and overfeeding can cause nutritional problems, it’s a good idea to approach your vet for help if you aren’t sure you are feeding the right diet and amount for your pregnant cat.

There are many different types of cat fur types. There are long, short, dark, multi-colored, and even hairless. If you…
The category

How to Help Your Grieving Cat Recover from Pet Loss

It’s always hard when someone in our household passes away. We have our own grief as humans, but our cats…
The category

Can Cats Eat Canned Salmon? What You Need to Know!

Cats are notorious for their love of fish, so feeding them a bit of canned salmon should be a no-brainer.…