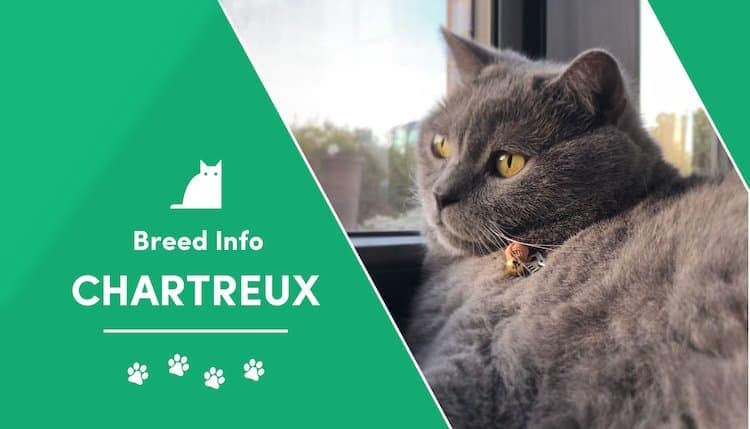 France’s contribution to cat fanciers everywhere, the Chartreux (pronounced shar-TRUE) is a true-blue cat with a long history in the French countryside.

Amiable and easygoing, this ultra-quiet cat breed may very well come from the Carthusian monasteries of the late middle ages. Allegedly bred over centuries to have a tiny, diminutive meow, it is said that the Chartreux was designed so as not to disturb the meditations of the monks who cared for them.

If you’re curious about whether this heritage breed would make a great addition to your home, then you’ve come to the right place. In this guide, we’ll be covering everything you need to know to get acquainted with the Chartreux — from how to buy or adopt a kitten, to their temperament, intelligence, health habits, and more.

Chartreux Kittens – Before You Buy…

Holding the unofficial title of “world’s quietest cat breed”, a Chartreux kitten’s melt-your-heart squeak has been the tipping point for many adoptions. Kind-hearted and incredibly intelligent, yet not particularly active, these cats can truly be said to resemble the monks from which they get their name.

Generally healthy and possessed of a long life span, adopting a Chartreux is a long-term commitment that requires careful consideration. With most cats of this breed living upwards of a decade, be sure that you’re prepared to care for them through good times and bad.

A long and storied breed, pure-bred Chartreux cats are also highly desirable. If you plan to buy one from a breeder, be sure to extensively research their credentials — and be prepared to pay a hefty sum for pedigreed kittens.

What’s the Price of Chartreux Kittens?

It will usually cost around $75 to $150 to adopt a Chartreux, whether adult or kitten. Buying from a breeder can be exceptionally expensive though, with kittens routinely selling for around $500. For a Chartreux with documented pedigree, this price can skyrocket to as much as $1500.

1. The Chartreux is an Excellent Mouse Catcher

Long prized for its hunting abilities, the generally quiet and stealthy Chartreux lived for many years aboard ships and as a street cat. It’s most likely that they were imported from Asia, brought along on long ships to control the rat population; this also explains their popularity in monasteries, where monks would likely be forbidden to kill or drive out rats.

2. It’s Rumored That They Were Bred by French Monks

The most popular and persistent origin story for the Chartreux — though almost definitely untrue — is that this breed was created by Carthusian monks in the Southeast of France. Their especially quiet voices, so the story goes, were selectively bred into this cat to keep them from being able to disturb monks during their meditations.

While there is considerable evidence that this is not the genuine origin of the Chartreux, there is a good chance that the ever-curious Carthusian monks did keep these useful cats in their monasteries. It’s easy to imagine that the mild temperaments and quiet voices of both monks and cats would get along very well together.

3. There is a French Tradition for How to Name your Chartreux Cat

Chartreux breeders have long observed a curious tradition of naming their kittens born in a particular year with a certain letter of the alphabet. Omitting the letters K, Q, W, X, Y, and Z, each year proceeds one letter further in the alphabet for naming.

Temperament & Intelligence of the Chartreux

Highly intelligent and affably good-natured, the Chartreux survived generations of hard life as a street cat by virtue of its pleasant demeanor and notable hunting skills. Emanating mighty purrs and tiny meows from their stocky bodies, they are a highly adaptable breed that is as loyal and loving as cats come.

Because of their powerful hunting instincts, this strong but silent breed loves exercising, playing with toys, and training. They’re most fond of toys that move, especially such human-powered delights as feathers on the end of string. Though their endurance is admirable, oftentimes their attention span is not; when a Chartreux is done playing, you’ll rarely be able to entice them back to it until they’re good and ready.

It’s hard to imagine a cat that is better suited to mix with families of all sizes. From single cat owners to large families with small children, the hardy and adaptable Chartreux will fit in without a fuss. As long as they have a bowl of food, a clean litterbox, and a warm place to sleep, the Chartreux will provide constant companionship, entertainment, and affection to an entire family.

While Chartreux cats generally get along well with other cats, they don’t always take as easily to dogs — and don’t even think about housing them with a prey animal, such as a rabbit or guinea pig. Their natural hunting instincts will quickly overtake their kind demeanors, leading to unfortunate consequences for smaller pets and heartbreak for their owners.

Things to Know When Owning a Chartreux:

Owning a Chartreux requires a significant investment of time, money, and effort. If you’re thinking of bringing one into your home, here are a few things you should know:

The Chartreux Breed requires no dietary considerations above and beyond those of any other cat. This means that a diet of high-quality dry cat food, fed regularly and in moderation, will keep them happy and healthy for years to come.

If you plan to keep your Chartreux as an indoor/outdoor cat, don’t be surprised if they regularly show up on your doorstep with freshly killed mice or birds. They are naturally talented hunters and will often hunt just as much for sport as for food.

Because of their keen hunting and tracking instincts, the Chartreux very much enjoys exercise in short bursts. Provide them with moving toys and quick tests of their agility, and they’ll happily partake in daily exercise. When they’re not on the prowl, though, you can expect to find this breed happily lounging in the comfiest chair in the house.

The Chartreux takes very easily to training. With even a small amount of coaching and reward, a Chartreux can quickly learn to fetch a thrown toy or bring its favorite to you when it wants to play. Due to their great intelligence, most Chartreux will learn their names quickly and can even be taught to come when called — if they feel like it at the moment, that is.

Uncommon amongst cats, this breed has a nearly waterproof coat due to a double layering of medium-length, slightly wooly hair. They are moderate shedders, and it is good practice to brush them at least once per week for most of the year. During their shedding season in spring, you may need to brush them as often as once per day.

Though the Chartreux is generally a healthy breed, some genetic lines have passed down a recessive gene that leads to kneecap dislocation. Known as hereditary patellar luxation, this painful condition will occasionally pop the Chartreux’s kneecap out of its track when running or playing. Look for Chartreux cats from a reputable breeder that has pre-screened for this problem, and you won’t run the risk of emergency trips to the vet.

Both male and female Chartreux cats display the traits of their breed almost equally, with cats of both sexes being kind, loving, and affectionate. Males have been known to be somewhat more active, while females are generally seen to be more devoted to their owners. Because they have a long history of crossbreeding, though, it’s better to consider each individual cat for its particular temperament rather than try to decide based on the sex.

No matter whether the Chartreux came by way of Asia, the streets of France, or Carthusian monks, one thing is certain — it’s a kind and affectionate breed that makes an excellent pet. Mild-mannered and easy-going, these nearly silent cats can fit well in almost any home. Give them food, water, and a place to sleep, and you’ll have made a friend for life.

Still looking for the puuuur-fect cat? Check out these breeds:

If you’re excitedly counting down the days until your tiny new kitten arrives at home, then congratulations! It’s an exciting…
The category

Balinese vs Siamese Cat: What’s The Difference? (With Pictures)

Have you ever wondered what the differences are between Balinese and Siamese cats? The two breeds are extremely similar and…