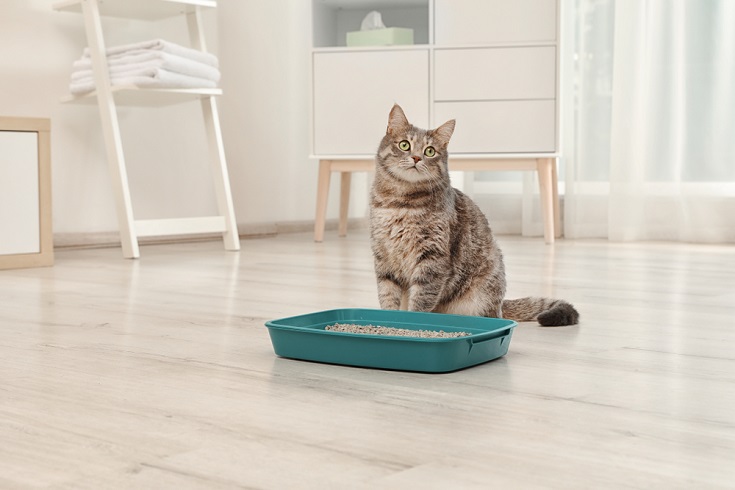 Cat litter should be comfortable and safe for your cat to use, easily cover up their poop and pee, and do a good job of masking unpleasant aromas. When choosing a litter, one of the basic choices you have is whether to opt for clumping or non-clumping cat litter.

On the one hand, clumping litter should be easier to clear up and the litter should last longer without needing to be replaced. However, it is not considered as good at collecting cat urine as non-clumping litter. That being said, the latter also has its issues; it leads to a pooling of urine once the litter becomes saturated.

Both types of litter have their proponents and opponents, as well as their own benefits and pitfalls. Below, we have outlined the primary differences between these two categories of cat litter so that you can choose the right one for your litter trays. 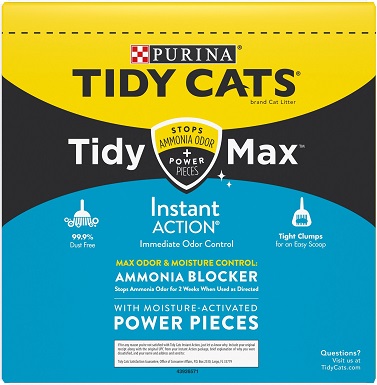 The Purina Tidy Cats Instant Action Clumping Cat Litter is a clay cat litter. Purina guarantees that it will retain odor for 10 days when used as directed, enhanced by its deodorizing ingredients, and it has a low dust formula that makes it convenient and tidier for use.

Clumping cat litter is usually made using a material called bentonite, although some litters use other materials and may use all-natural clumping material. The clumping material forms into a solid clump as the litter takes on liquid, usually in the form of cat urine. This prevents urine from reaching the bottom of the tray, and the clumps can retain odor as well as liquid, which can help reduce the smell of cat urine and cat poop in the cat litter room.

Clumps can be removed, negating the need to empty and clean out the litter tray as frequently. The litter boxes do still need to be emptied, but this can usually be done once a week to once a month, depending on urine production level and the quality of the litter used, rather than every couple of days.

Clumping cat litter is relatively easy to use. It requires less frequent changing than the non-clumping variety, and it allows you to skim off the clumps that have been formed when your cat pees and poops in their litter. However, some of the clay-based clumping cat litter has a reputation for forming an almost cement-like bond at the bottom of a litter tray, and this can make it difficult to get the litter box completely spotless. Good quality clumping litter is easier to clean, however, because urine is not allowed to pool at the bottom of the tray.

Clumping cat litter is considered cleaner. Urine does not pool at the bottom of the tray, and cat poop picks up the clumping cat litter more easily than it does non-clumping. However, some clumping litter emits dust when pouring, and this can also be tracked through the house by your cats as they stand in it and transfer it onto the floor. 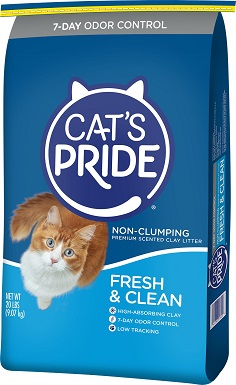 Cat’s Pride Premium Clay Cat Litter is an absorbent but non-clumping cat litter. It can hold up to 100% of its own weight in litter, and it does a good job of absorbing heavy liquids. The litter has a light fragrance that helps to mask the smell of litter and it does not use harsh chemicals to achieve results.

Non-clumping cat litter would have been the original choice. It would have included materials like sand and torn-up newspaper. These needed frequent cleaning and clearing out because they did not retain urine, which pooled at the bottom of the litter. Modern non-clumping litter is usually made from a clay material. Non-clumping materials that retain odors are usually chosen, but some litter includes additional materials that not only cover odors but mask them. Materials like charcoal, for example, work as a deodorizer.

Non-clumping cat litter is very simple to use. You simply empty the tray, clean it, and replace it with fresh litter. While the process is simple, it does require more frequent cleaning of the tray. It is difficult to scoop poop and other litter from the box.

Because it does not usually produce clouds of dust, non-clumping litter does not usually track through the house as easily, and you shouldn’t find the floor covered in dusty pawprints. However, the litter box itself can become very dirty. Urine pools more easily at the bottom of the tray, and you will have to do a full litter box change more frequently.

Cat litter performs a vital role in the everyday care of your cat, as well as in the cleanliness and maintenance of your home. Clumping litter does not need to be fully replaced as often but can be more expensive, while non-clumping litter offers better odor control but more frequent changing. It may take some experimentation to determine your preferred type of cat litter, but you should also bear in mind the age of your cat and the suitability of certain types of cat litter for kittens and seniors.

Cats are well known for their curiosity, and this sort of always-playful behavior is often on full show during mealtime.…
The category

Cats make great companions. They’re loving, independent, and full of character. They can be fun and funny, but they can…
The category

Cats are renowned for their good litter box habits. However, sick or senior cats can have the occasional accident. Cat…