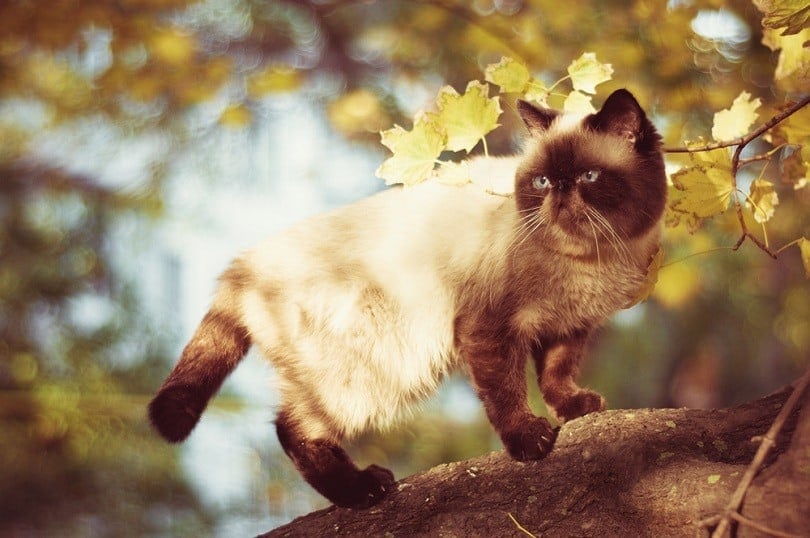 The Colorpoint Shorthair is essentially a Siamese cat of a different, non-traditional color. The breed was developed in an attempt to create a Siamese Cat with more color variations than the traditional seal, chocolate, blue, and lilac colors that are accepted among Siamese. Breeders crossed a Seal Point Siamese with American Shorthair, and the breed was slowly developed into 16 different pointed colors and patterns.

As you’d imagine, these cats are similar to their Siamese cousins both in appearance and in personality. They are outgoing, affectionate, and playful cats that are known for their vocalization and tendency to “talk” to their owners when they want attention. They love to be around their owners and are often described as a needy breed — they adore attention and do not enjoy being left at home alone.

If the Colorpoint Shorthair sounds like the breed for you, read on below for an in-depth look at this gorgeous breed.

Colorpoint Shorthair Kittens — Before You Buy

Before bringing home a Colorpoint Shorthair, it’s worth mentioning that these cats are highly vocal — they will vocalize when they want food or attention and then continue afterward to say thank you! This vocalization can sometimes be almost incessant and become overwhelming for some owners, so you should be prepared for a vocal pet before bringing one home. They can also be fairly demanding of attention and don’t enjoy being left alone for long periods, and you should take this into careful consideration if you are away from home frequently.

The Colorpoint Shorthair shares many traits with Siamese Cats, so keeping with the advice of Siamese owners, you may consider bringing home a pair to keep each other company.

If you are in the market for a Colorpoint Shorthair, you can expect to pay around $500-$800 or more from renowned breeders. Of course, you’ll also need to take into account the other costs involved too, such as food, bedding, toys, and vet checkups, so we recommend adding on another $300-$400 on top of the purchase price.

3 Little-Known Facts About the Colorpoint Shorthair

1. Colorpoint Shorthairs are not always considered a separate breed

According to the Cat Fanciers Association, the Colorpoint Shorthair has been considered a separate breed since the early 1960s. However, this is not always the case. Some breeders consider the breed as simply a different color variation of the Siamese because the two are so closely related, and The International Cat Association in particular does not recognize Shorthairs as a separate breed. The breed is also known by different names in different parts of the world: They are referred to as Himalayans in Europe, for example.

2. They come in 16 different color variations

3. They are uniquely vocal cats

As most Colorpoint owners will tell you, these cats are highly vocal and will use their vocalizations to get your attention and whatever they want. This can be a real concern for owners living in apartments or small homes, as these vocalizations can become incessant. These cats are known to be capable of over 100 unique vocalizations, which is far more than most other cat breeds.

Temperament & Intelligence of the Colorpoint Shorthair

The Colorpoint Shorthair is a playful, highly intelligent, and exceedingly friendly breed. They are affectionate cats that like their Siamese cousins, love nothing more than to be close to their owners. They are highly attention-seeking and have a real need for human interaction, and this can lead to destructive behavior if they are left alone for extended periods. They can become attached to one owner, and while they are generally friendly toward family members, this can lead to possessive and jealous behavior at times.

They are curious cats that love to explore their surroundings and can often be found perched high up in the home to observe the activities around the home. These cats are playful and energetic, and this combined with their friendly and outgoing nature makes them a great family pet. They love to interact and play with their family with toys and balls and will benefit greatly from having another Shorthair to keep them company.

While these cats are energetic and playful, they adore being on their owner’s lap too. They love to be cuddled up with their owners in soft blankets and are known to sleep on the bed with their human parents.

Colorpoint Shorthairs are ideal family cats. They love to play, are gentle with children, and are extremely affectionate, making them a great addition to any family. They are a fairly needy and attention-seeking breed, so they do not enjoy being left at home alone for extended periods.

Does This Breed Get Along With Other Pets?

Colorpoint Shorthairs are friendly and outgoing cats that get along great with other cats, especially with other Colorpoint Shorthairs. They are generally fine with the family dog too, although early socialization and proper introductions are essential. These cats are expert ratters, which is ideal for homes with rodent problems but may be an issue if the rodent is your beloved pet!

Things to Know When Owning a Colorpoint Shorthair

Colorpoint Shorthairs are long, lean, medium-sized cats. If not fed carefully, these cats can swiftly get overweight or become obese, which can lead to a host of health issues, like heart disease, diabetes, and exacerbated joint issues due to the added weight. This is why we advise against free-feeding and too many snacks.

Your Colorpoint’s diet should consist of high-quality dry food with at least a 40% protein content, and this should be from animal sources like chicken or fish. This will give them the essential amino acids and vitamins that they need to thrive. Steer clear from foods with protein sources from vegetables, as these are of lesser quality and not readily absorbed. We recommend splitting their daily meals into two and mixing up their food for added variety. Add in quality wet food or lean meats occasionally, and avoid foods with filler ingredients. These are often made up of grains, and as cats are obligate carnivores, these will cause digestive tract issues and possibly lead to excess weight gain.

The Colorpoint Shorthair is moderately active and doesn’t need a huge amount of exercise. This is made far easier if they have a playmate, as they will be exerting much of their energy with their pal. A climbing tree is a great idea, especially if your Shorthair stays indoors. They love to be up high, and the tree and a few toys should be more than enough to keep them adequately exercised.

The intelligence and curiosity of these cats make them adore puzzle games and interactive play toys, and purchasing these extras are well worth the money.

Colorpoint Shorthairs are intelligent animals that are usually easy to train. By beginning training early, you’ll save yourself time in the future correcting bad habits, and you can begin basic command training and house training as soon as you bring your kitten home. These cats can be trained to perform tricks too and are known to play fetch as well as any dog breed.

Colorpoint Shorthairs have a short and glossy coat that is a breeze to keep properly groomed and maintained. They are low-shedding cats too, so brushing once or twice a week is perfectly adequate to remove any dead hair or dirt build-up. Brushing also helps keep your cat’s coat smooth and healthy by distributing its natural oils. The only other things to be aware of are to consistently check their ears for any redness or signs of infection and to make sure they have a scratching post to keep their claws short and trim.

Colorpoint Shorthairs have a fairly long lifespan, especially when kept indoors, but they are prone to several genetic health disorders. These include many of the disorders common in their close cousins, the Siamese. These include the following:

Amyloidosis. This disease is characterized by the deposit of amyloid proteins outside of the cells in various organs. This disorder may eventually lead to tissue and organ failure and high blood pressure. Protruding sternum, also commonly referred to as “funnel chest,” is a disorder typically caused by a birth defect and may result in breathing issues.

Colorpoint cats are also prone to various eye issues, including crossed eyes, retinal degeneration, and progressive retinal atrophy. In addition to this, there are reports from owners that these cats have hypersensitivity toward some vaccines, so be sure your vet is aware of this.

While the differences between male and female Colorpoint Shorthairs are largely anecdotal, it is still an important factor to take into consideration when deciding to bring home a kitten. Males are typically more affectionate and sociable and love all the attention they can get. They are known for attaching themselves strongly to one owner, but this is fairly common among females too, just less so. Males also tend to be more playful than females and are always up for a play session, which they’ll make you aware of with their unique vocalizations!

While males and females have a few distinctive traits, it’s important to note that every cat has its own unique character and personality, and this is affected by their upbringing and environment more than their sex.

The Colorpoint Shorthair is the close cousin of the Siamese and shares several physical and temperamental traits with the breed. These cats love attention, affection, and interaction and will make it known by their loud and unique vocalizations. They make ideal family cats because they are outgoing and social and make fast friends with new faces.

Colorpoint Shorthairs do not enjoy being left alone for extended periods, so we recommend getting them a friend if you are away frequently. They are easy to care for and groom, and as long as you are fine with a lot of vocalization, they make for an ideal family cat!

Review Summary Introduction Purina Beyond is a pet food line from the familiar name Purina. Purina has been making pet…
The category

Why Do Cats Knead? 6 Reasons Why They Do It

Cats are anything but normal. They do things that leave you wondering what could possibly be going on inside their…
The category

Regardless of whether you own a fluffy Persian or a smooth Siamese, daily brushing is essential to remove any shedding…