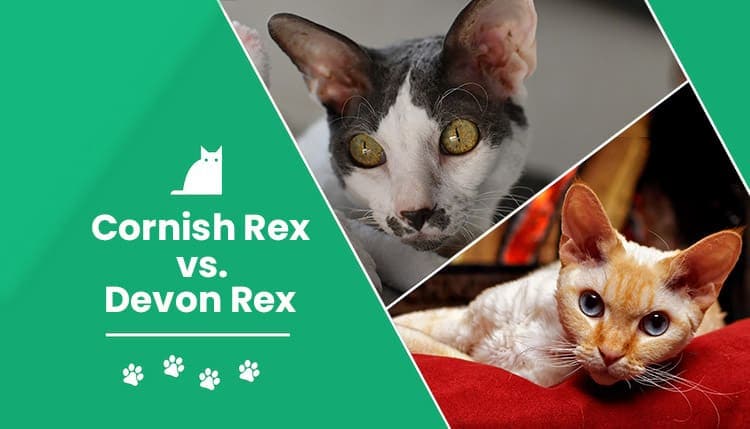 It can be easy to confuse the Cornish Rex and the Devon Rex. Their names alone are so similar, coming from the breeds’ origins in the United Kingdom. Both cats look alike, with lean, muscular bodies, large ears, and wavy coats. Despite these similarities, though, there are several unique distinctions that set each breed apart.

The Devon Rex has a few easily identifiable physical traits that make it unique from the Cornish Rex, including its large, low-set ears, much shorter whiskers, and slightly shorter and more muscular legs. The Cornish Rex, on the other hand, has longer legs, a smaller waist, a larger chest, and a finer coat than the Devon Rex.

Other than these subtle physical traits, there are distinct personality differences too. In this article, we’ll take a look at each breed and identify exactly what sets the two apart. 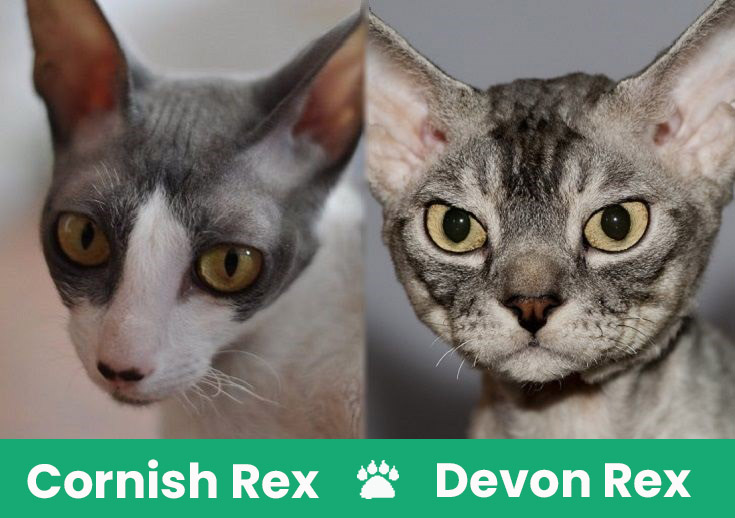 Named after the Cornwall region of the United Kingdom where the breed originated in the 1950s, the Cornish Rex was developed after the appearance of a uniquely curly-haired and long-legged kitten. This coat is caused by a recessive gene, and the kitten was further bred with British Shorthairs and Siamese Cats, among others, to develop the trait. The Cornish Rex was officially recognized by the Cat Fancier’s Association (CFA) in 1964.

The Cornish Rex can best be described as charming, regal, and intelligent and is a confident cat that loves to be around its owners. They are happy to be handled and held, even by children, making them an ideal family pet. Many Cornish Rex owners describe these cats as “dog-like,” due to their ease of trainability and ability to retrieve toys.

They are highly playful cats and are known to retain this kitten-like playfulness well into adulthood. Although not as vocal as some other breeds, like the Siamese, these cats are not afraid of voicing their opinion and are by no means silent!

With their eagerness to please and interact with their owners and their high intellect, training a Cornish Rex is a breeze. They are active and agile cats that love to climb, so a climbing tree is a great investment because they’ll love looking down on their kingdom from above. Command training and puzzle toys are no match for this intelligent cat, and you’ll be surprised at just how quickly they learn new puzzles and games. Indeed, these cats love to play and will keep themselves entertained for hours with a well-designed puzzle toy.

With their short and smooth coat, grooming a Cornish Rex is a simple affair. Even just regular stroking and petting is usually enough to keep this cat groomed, and for Cornish Rexes with slightly longer coats, an occasional brush will suffice. That being said, this short coat is free from a protective outer coat, so they’ll need to stay inside where it’s warm in colder climates.

The Cornish Rex is generally a healthy breed but does have a few hereditary diseases to look out for. These include congenital hypotrichosis, a condition that is likely caused by the breed’s recessive gene that may cause baldness, and hypertrophic cardiomyopathy, a fairly severe form of heart disease.

The Cornish Rex is a great family cat because they are gentle and affectionate with children and more than happy to play games for hours on end. They are better suited for indoor living due to their short coat and lack of protective overcoat, so as long as they are kept active, they are more than happy with indoor life. These cats love to be around their owners and are ideally suited for owners who are not frequently away from home. Other cats and dogs are no problem for these friendly and outgoing felines.

Like their Cornish cousins, the Devon Rex originated in the United Kingdom in their namesake Devonshire, albeit about a decade afterward. Their short and wavy coat was similarly caused by a unique genetic mutation, and the breed was thought to be genetically the same as the Cornish Rex, but this was quickly proved to not be the case. The breed was officially recognized by the CFA in 1979, more than a decade after the Cornish Rex.

The Devon Rex is an affectionate cat that loves to be wherever you are. They can usually be found not far from their owner, watching closely and observing their every activity with quiet and gentle grace. This cat is a fun-loving breed that is always up for a play session but is far more relaxed and laidback than their Cornish cousins. Loyalty is a common trait described by Devon owners, and these cats are happy as long as they are close to their family, whether it be playing, cuddling on the sofa, or sleeping in the bed!

They are social cats that need constant companionship, although they are different from the Cornish Rex in that this companionship can come in the form of people, other cats, and even dogs! Indeed, Cornish Rexes are not overly discriminatory of the company they keep and make fast friends with everyone.

Devon Rexes are playful and retain their kitten-like antics well into adulthood, although far less so than their Cornish cousins. While they love to play and will keep children endlessly entertained with their antics, they are fairly easy-going and docile and are far more likely to be curled up on the sofa with their family.

Their high intellect makes training a breeze, and they can swiftly learn commands, and house training is no issue at all. They can easily be taught tricks and are often taught to retrieve toys with a small amount of guidance.

Grooming a Devon Rex is a breeze, even though their coats are slightly wavier and often slightly longer than the Cornish Rex. They are low-shedding felines, so a weekly brush is plenty to remove any dead hairs or dirt and keep their coats smooth. Like the Cornish Rex, their coat is fairly thin and short, so you’ll need to take extra care during cold months to keep them warm.

Like the Cornish Rex, the Devon Rex is prone to congenital hypotrichosis and may be seen with varying degrees of balding at times due to their unique genetic mutation. Hypertrophic cardiomyopathy is another disease that the breeds share, although it is fairly rare. They are prone to several skin issues too, including urticaria pigmentosa and Malassezia dermatitis, both of which are easily treated with a good diet and medication. Devon Rex myopathy, also known as spasticity, is unique to the breed and causes general muscle weakness and lethargy.

The Devon Rex is a loving and affectionate cat that makes a great family pet. They are well suited to homes with children and make fast friends with other family pets too. They are more laidback and docile than the Cornish Rex and make ideal companions for seniors and people living in small apartments.

Other than the Devon and Cornish Rex, there are several other “Rex” breeds, including the LaPerm, Selkirk Rex, and German Rex. The “Rex” in their name refers to the unique genetic mutation in these breeds that causes them to have uniquely soft and curly fur. This genetic mutation results in a similar appearance but is uniquely different among the breeds, so these cats are all completely unrelated.

The coats are typically wavy or crimped, exceedingly short, and devoid of an outer coat, and the cats usually have short and crinkled whiskers.

What Are the Differences?

These two breeds are similar in more ways than they are different, and either cat is sure to be an affectionate, outgoing, playful, and loyal family companion. They both have a uniquely beautiful appearance, with their wavy and short coats, crinkled whiskers, and large, low-set ears. Both cats are also easy to look after, with low grooming requirements.

That said, Cornish Rexes are slightly more playful and energetic and a bit smaller in size and have a slightly longer lifespan. They also have fewer hereditary diseases to be concerned with, although both breeds are known to be healthy overall.

If you are looking for a playful, energetic cat that is affectionate, loving, and loyal, either breed is a great choice, although the Devon Rex may be more docile and easy-going than the Cornish Rex.

Did you know that many cats will develop symptoms of oral diseases, primarily gingivitis, by the age of three years…
The category

We totally understand how exotic a beautiful tiger stripe looks on a kitten’s coat. If your cat has stripes, this…
The category

How Much Should My Cat Weigh? (With Chart)

Cats are one of America’s favorite pets, but as more of them spend their lives indoors, they are also putting…