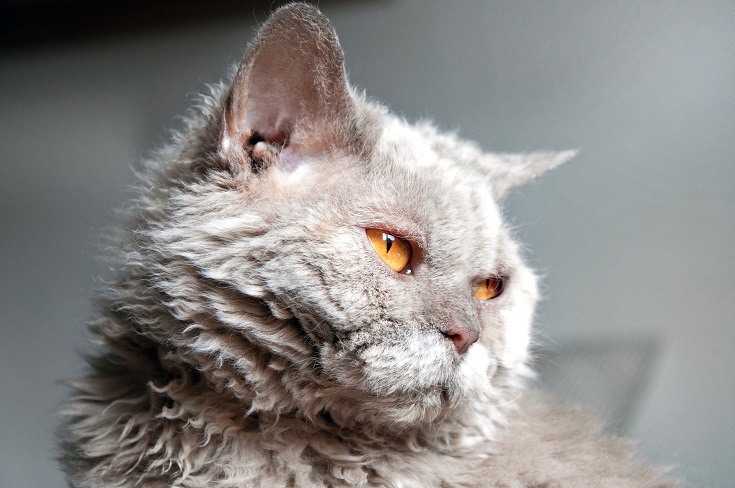 Curly-haired cats are extremely rare, and this anomaly indicates that the cat is actually missing at least one layer of its natural hair.

Cats have an outer coat of stiff hair called guard hair that protects against the rain. They have a middle, softer layer, called awn hair, and they also have a short and soft layer that is called down hair. When one of these layers is missing, a cat may have curly hair. This is a rare occurrence in a single cat, and where it has occurred, it has not always proven possible to breed this trait. As such, it is even rarer to find curly-haired cat breeds. With that said, some do exist. In fact, there are four known curly-haired cat breeds, most of them in the Rex class.

Curly-haired cats are less prone to shedding and may not shed at all. This has led some to refer to them as being hypoallergenic, and allergy sufferers may turn to these breeds as a means of safely owning a cat without having to endure the symptoms of cat allergies.

The Selkirk Rex is a large cat with a rounded head and robust limbs. It tends to have a long coat and is revered for its teddy bear looks, which include an almost woolen-looking fur. The breed is not known for being particularly affectionate or athletic, but it can have a distinguished and unique look. This breed tends to be kept as indoor cats because, among its various traits, it tends to be lacking in energy, as well as enthusiasm. The Selkirk Rex also usually has wavy whiskers, and all cats of this breed can trace their lineage back to a single cat called Miss Depesto.

The LaPerm cat’s coat is short and wavy, and it gives the breed a look as though they have just been woken up. Unlike the Selkirk Rex, this breed is known for being sweet and affectionate with people. They will follow you around waiting to be noticed and they crave attention, which they are sure to receive plenty of, thanks to their incredible and unique looks. They can come in a variety of colors and markings. They even come in short- and long-haired varieties but if you get one as a kitten, be prepared for the fact that their curly hair will disappear after birth before re-emerging when they are about ten months old.

Known as the pixie cat or the alien cat, thanks to their large ears and slender body, the Devon Rex is a beautiful and distinctive looking feline. They come from Devon, in the UK, hence their name, and they are prized for their intelligence as well as their looks. Their hair tends to be short, and they have big eyes. The curly coat is actually quite fragile, and the breed is prone to over-grooming, leading to areas where the fur has been completely licked away. The breed is not only affectionate but incredibly playful and will gladly perform tricks if it means that it will get the love of its owner.

The Cornish Rex breed comes from Cornwall in the UK, which borders Devon, and is another breed that has short and curly hair. In fact, it shares a few physical traits with the Devon Rex because it is slender and has large ears. The Cornish Rex has no guard hair or awn hair and only has the soft undercoat. This soft cat is also similar to the Devon Rex because it not only wants but demands attention and affection from its owner. It’s also an agile and athletic cat and can run and play endlessly.

There may be other individual cats with curly hair, but these four are the only known curly-haired cat breeds. Although they are described as being hypoallergenic, there isn’t really such a thing, but because of the lack of one or two layers of fur, owners are less likely to suffer allergic reactions around these cats than around long-haired cats.

If you are looking for truly unique and attractive breeds, then these curly-haired cats meet those criteria and more.

There are few animals as instantly recognizable as the Sphynx cat. This hairless beauty is adorable, cuddly, and incredibly friendly,…
The category

“Play Him Off, Keyboard Cat!” Why Did It Go So Viral?

Most of the time, meme culture moves too fast to perceive. If you want to feel old, listen to this:…
The category

Can Cats Eat Asparagus? – Is It Safe For Cats?

While you might love asparagus in risotto or as a side for your steak, should you be offering your leftovers…