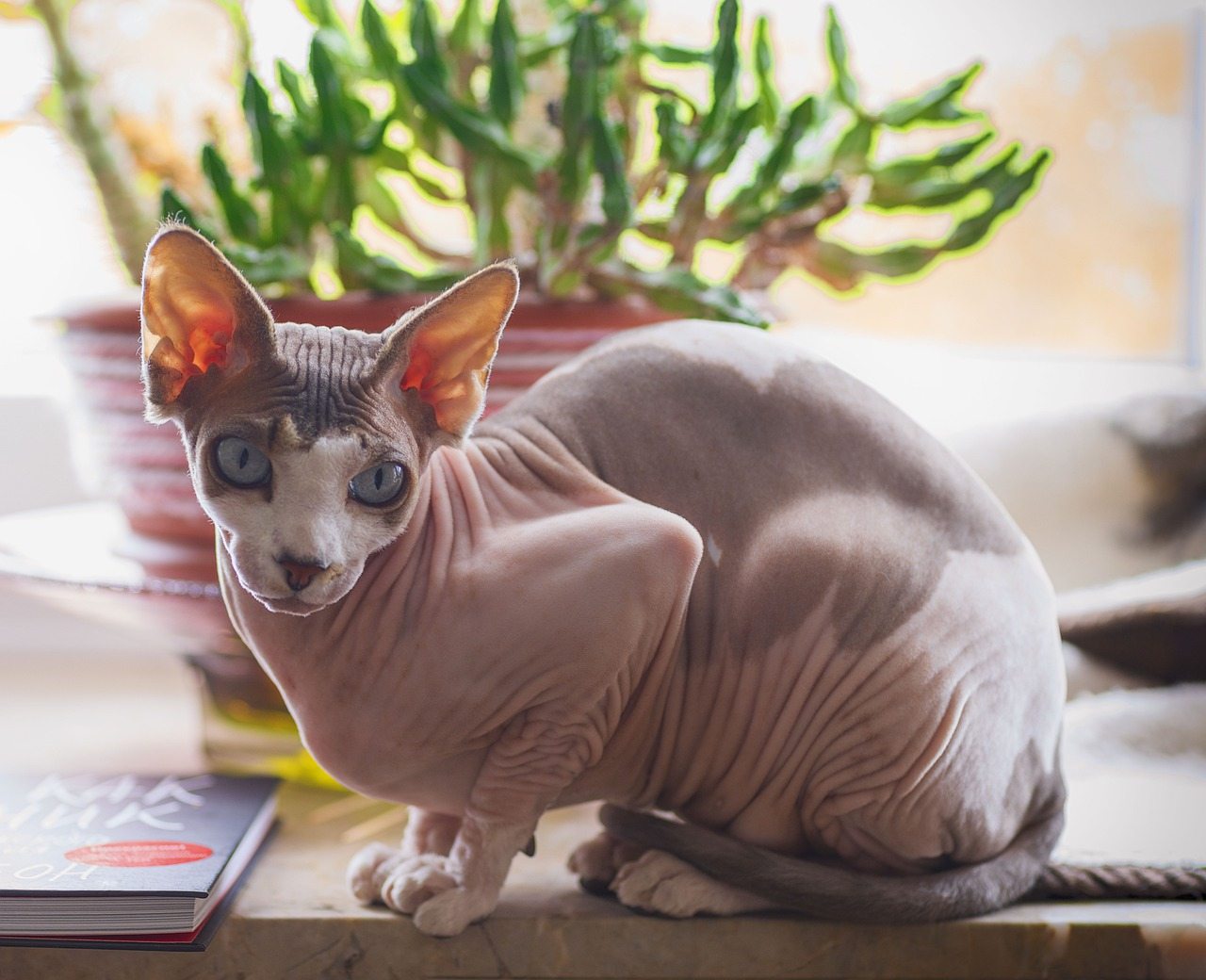 While they may not have the luxurious coats of many other cat breeds, Sphynx cats are still born with a wide variety of colors imprinted directly on their skin, or on the almost-invisible hairs that lay close to their bodies.

Rather than go over every single color of Sphynx cat that could be produced, we will first explore the major categories of colors and patterns that the Cat Fanciers’ Association (CFA) uses to classify coat colors. Read on to discover the surprising variety of coat colors and patterns available for this distinctive breed!

Any single color being predominant will classify a Sphynx as having a “solid coat,” even if its nose leather and paw pads are of a slightly different color. Exposure to the sun tends to intensify solid colors for Sphynx cats.

This breed can also be found in white with patches of any of the above-mentioned solid colors, or white mixed with tabby, tortoiseshell, or pointed patterns. Additionally, there is a special designation for van bi-color, where the colored portions will be confined to the head, tail, and legs only.

A rather complex coat pattern defined by its concentric rings, tabby cats have clearly defined ringed markings on their legs and tails, as well as several “necklaces” on the neck and upper chest. Additionally, frown lines on the forehead will make an unbroken letter “M” shape, and a solid vertical stripe can be found on the spine.

Described as “black mottled or patched with red and/or cream” by the CFA, tortoiseshell coat patterns often feature a blaze on the face, as well.

Other common calico pattern colors include fawn, lavender, cinnamon, and chocolate, in either classic or van conformations.

Sphynxes born with the pointed color pattern will be very light in their youth and adolescence but grow darker as they age. Most noticeable for their vivid blue eyes, pointed Sphynx cats may be combined with any other pattern (except mink) and any colors.

Remarkably similar to the pointed pattern, mink Sphynxes are differentiated by their mild aqua-colored eyes. They may also be found combined with any other pattern (except pointed) and any colors.

Officially recognized as a final catch-all category for the tremendous profusion of Sphynx coat colors, Other Sphynx Colors is used to describe any combination that doesn’t fit neatly into the above-listed coats and patterns. A common example is a Sphynx of any coat color, combined with any number of white feet.

A Brief Overview of the Sphynx Cat

Perhaps most famously known for its role as Mr. Bigglesworth in the Austin Powers movie series, these hairless wonders are just as well regarded for their friendly temperaments as they are for their signature looks. Weighing 6 to 12 pounds and living for 8 to 14 years, the Sphynx is a generally healthy breed – As long as you take care of its unique grooming and skincare requirements, that is.

Celebrating cats since 1906, the Cat Fanciers’ Association is the premier governing body for cat shows around the United States. In their guide to the Sphynx breed, it is stated that “all colors and patterns, in any combination, found in felines is acceptable in the Sphynx.” (source)

As far as judging the Sphynx breed goes, however, the CFA does not give points for color as it would with many other cat breeds – opting instead to award points in competition based on the quality, conformation, and texture of the skin.

This means that while Sphynx cats can be found in every coat color and pattern you can imagine, breeders will, rarely if ever, attempt to produce cats of a specific color in this breed.

Sphynx cats of all coat colors may be blessed with striking eye colors, but perhaps none more so than white or fawn Sphynxes. They can display a rare trait known as heterochromia, where each of their eyes will be a distinctly different color.

While you may be tempted to think that a hairless cat would have fewer grooming requirements than a long-haired breed, the opposite is true: Sphynx cats have exceptionally high grooming and maintenance needs.

In addition to weekly baths to manage their body oils, Sphynx cats need to be regularly moisturized with lotion to keep their skin healthy. Weekly teeth brushing is necessary to prevent dental diseases, as are cleaning their ears and eyes for good hygiene.

There’s no doubt that the Sphynx cat is one of the most unique cat breeds around. Available in a veritable painter’s palette of colors, there’s almost no telling what type of kittens are going to come out of each litter!

If you’re considering bringing a sphynx cat into your home, we strongly encourage you to check in your local area for cats up for adoption. Because this breed has such specific grooming requirements and a somewhat odd appearance, they are often forced to stay in shelters longer than cats from other breeds.

Can Cats Drink Coconut Milk? What You Need to Know!

It’s a tale as old as time—a cats’ thirst for milk. But with advancements in feline nutrition, we know that…
The category

Cat Breeds: Complete List from A to Z (With Pictures)

Our comprehensive list of cat breeds to help you find your purr-fect match. Whether you're looking for a exotic looking…
The category

Is Citronella Safe for Cats? What You Need to Know!

Citronella is an excellent insect repellent, and its fresh citrus scent can be pleasant to have around our houses too.…