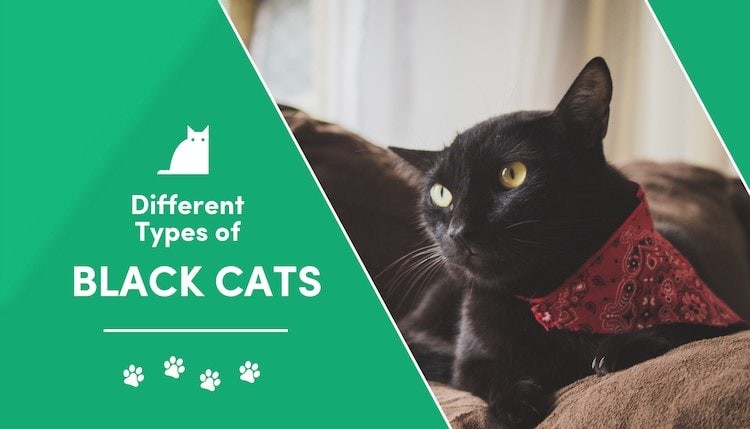 The black cat is one of the most misunderstood animals globally, and you can usually find one in the local shelter. Many people don’t want to own a black cat because of the persistent stereotype that black cats are unlucky or evil. Of course, nothing could be further from the truth, and these cats need love and affection as much as any other, and they will thank you by returning that love ten-fold.

If you wonder what breed is right for you, keep reading while we discuss several that commonly produce black cats.

Many people may not realize it, but all cats start black, and it’s their genetic makeup that alters their color and pattern. Therefore, you can find a black cat in almost all of the 44 breeds recognized by the Cat Fanciers Association, but some have a genetic makeup that results in black more frequently, and those are the ones we will look at here.

The American Bobtail is a rare breed that began in the 1960s. As its name suggests, It has a short tail no more than one-third the length of a standard cat. It has a large body with long back legs and round feet. It has a shaggy coat that’s neither dense nor fluffy.

The American Curl appeared in California in 1981, making it one of the newer cat breeds, and the original was a black cat. It has unusual ears that curl back and give it a distinct appearance. It’s a medium-size cat that is slow to mature and is available in long and short hair.

A post shared by Hailey The Black Cat (@haileyhsu0710)

The American Shorthair is a breed that may date back to the early American settlers and likely came with them from England to protect their grains from rodents. According to the Cat Fanciers Association, it’s one of the most popular breeds. It has a large, powerful body with a round face and short ears.

The Bombay cat is a short-hair breed many people recognize by its sleek, black, panther-like coat. It’s created by mixing the Burmese with the American Shorthair, and it has a muscular, medium-sized body with a black nose and copper or green eyes.

A post shared by s a l e m (@sweetbabyboysalem)

The British Shorthair is a compact and powerful cat, and as the American Shorthair in America, it is one of the oldest breeds in Britain, with no one sure how it got there. It has a short, dense coat with strong legs, round eyes, and a medium-length tail.

The Cornish Rex is immediately recognizable by its fine coat. It provides almost no protection from cold weather or sunlight, so this breed is only for indoors. It will tend to stay in warm places, like sitting by a radiator, which can sometimes cause burns.

The Devon Rex is another breed with very short hair that will need to stay warm and out of the sunlight. It has a slender body with large ears and eyes with slightly upturned noses. It has short whiskers and a slight frame.

The Exotic Shorthair is a cross between the Persian and the American Shorthair.  It has a large oval head, small ears, and a thick neck. It’s has a medium-sized body that is low to the ground and a thick tail.

The Japanese Bobtail is the second bobtail cat on our list and is quite different from the American variety. The tail resembles that of a rabbit, and it has large, upright ears and oval eyes. Its legs are long and slender, and its fur is soft and silky.

The Maine Coon cat is the largest domesticated cat in the world, except for the Savannah. It has medium or long hair that’s shorter on the head and shoulders. It also changes depending on the season and will be thicker in the winter than in the summer.

The Norwegian Forest Cat is a European long-haired cat with a powerful body, long legs, and a bushy tail. It has large, strong claws perfect for climbing and very few health problems, so it has a long lifespan that often reaches 14 years.

The Oriental Shorthair is closely related to the Siamese cat but is available in a wide range of colors, including black. It has a sleek and muscular body with a wedge-shaped head, almond-shaped eyes, and large ears.

The Persian cat is a long-haired breed with a large round face. First documented in 1620, English and American breeders developed it further after World War 2. Persian cats have a wooly undercoat and a wiry overcoat, requiring frequent brushing to keep the coat in top shape. Persian cats also have a pushed-in face that can cause problems breathing for some cats.

The Scottish Fold is a cat breed with a genetic mutation that affects the cartilage. This mutation causes the ears to fold over, giving the cat an owl-like appearance. It has a round body with shorter legs, and the coat can be long or medium length. You can find them in many colors and patterns, including black.

When choosing your next black cat, we recommend the Bombay if you want to be guaranteed one that’s all black. However, any of the breeds on this list and many others would make a fine addition to your home. As we mentioned earlier, you can often find them at the local shelter at a reduced rate that already has their shots and are looking for a home.

We hope you have enjoyed reading over these many breeds and found the one you like the best. If we have helped you find your next pet, please share this guide to the different types of black cats on Facebook and Twitter.