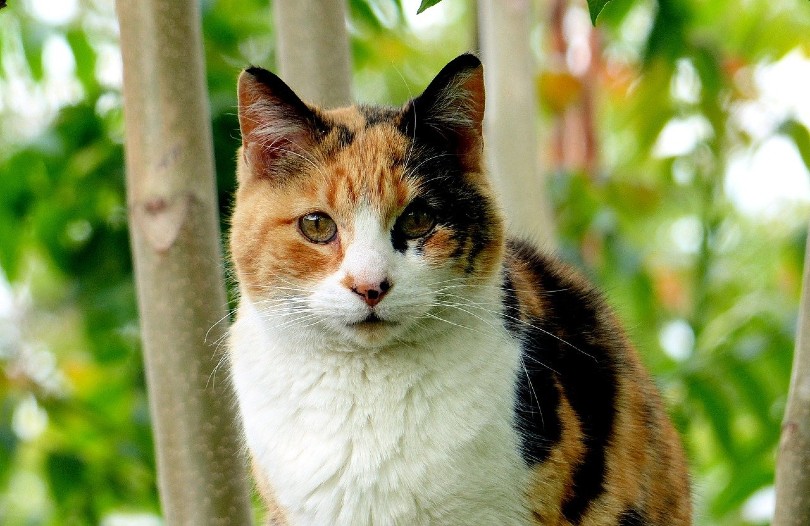 Calico cats are some of the most beautiful cats in the world. Calico does not refer to a specific breed of cat, but instead to a color pattern. Calicos are between 25-75% white with a mix of orange and black. These colors may be lighter or darker on some cats than others, but all three — white, black, and orange — must be present for the cat to be considered a Calico.

Calico markings are a happy accident of genetics; breeders cannot specifically aim for a litter of Calicos. Some of the breeds with standards that allow for calico coloration include American Shorthair, Turkish Van, Maine Coon, and Japanese Bobtail.

The 6 Types of Calico Cats

The Traditional Calico is a tri-color cat, with white, black, and orange patches. They are also called Tortie-and-White cats, since they look similar to a Tortoise shell, except white. They typically have white faces, chests, and legs. Calicos usually have black or orange foreheads, ears, and backs. Their legs may be either white or colored. Their spots may be more one color than the other, but they must have some combination of the two.

Calico cats may also display Tabby characteristics. Usually, this presents as an M-shaped marking on their foreheads. A Calico may also have stripes in the brown and black patches on their backs, sides, legs, and tails. Patched Tabbies often have white paws and can be either longhaired or shorthaired.

Male Calicos are exceedingly rare. Sex and color are both determined by the X chromosome, so Calicos are typically female. All male Calicos have XXY chromosomes, a genetic rarity called Klinefelter Syndrome. This causes males to be sterile, and they may possibly carry other genetic abnormalities that can shorten their lives.

The most common breed of Shorthaired Calico is the Domestic Shorthair. Domestic Shorthair is the official name for the average house cat. These cats of mixed or unknown ancestry account for at least 90% of the cats in America. Despite their uncertain lineage, Calico Domestic Shorthairs can be entered into cat shows that have “Household Pet” divisions.

Most Longhaired Calicos you’ll see are Maine Coons. This is simply because Maine Coons, or American Forest Cats, are the most popular longhaired cats. They’re known for their fluffy coats, squirrel-like tails, and sweet personalities. Calicos in general have gentle, loving temperaments, but Calico Maine Coons are even more affectionate and friendly than others.

Despite the diversity in their markings and breeds, one thing all Calicos have in common is a warm personality. Calicos have a reputation for being sweet and friendly. Whether you’re selecting a pedigreed show cat or making friends with a stray in an alley, you’ll usually find that Calicos are among the most pleasant of cats.

Losing a pet is not an easy experience. If you have recently gone through this, or someone near and dear…
The category

18 Different Types of Cat Food: What’s Best for Your Cat?

We all want the best for our fuzzy little friends. When you bring a cat into your world, you not…
The category

Why Do Cats Spray? Everything You Need to Know!

Having a pet brings extra love and laughter into a household. Cats make excellent additions to almost any home, but…