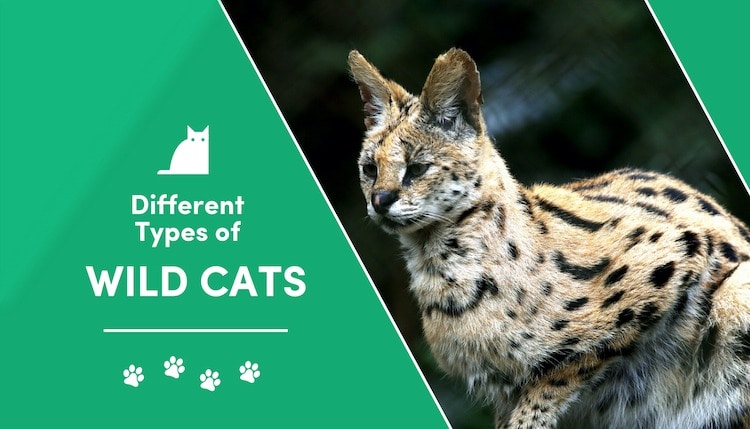 Wild cats, sometimes called exotic cats or big cats, are an unusual pet. It takes dedication, skill, and experience to safely own a wild cat. One might say that it’s impossible to “own” a wild cat; instead, they can learn to live in harmonious peace with their human keepers.

We’ve put together a list of the five wild cats most likely to be kept as pets.

Servals come from the African savannah. Known for their leopard-like appearance and oversized ears, they are a common exotic pet in areas where it’s legal to own one. Only a few states allow Servals to be kept as pets. They may only be the size of an average dog, but their survival instincts are strong. Servals naturally play using their teeth and claws and can easily hurt their playmates. Their bite is three times more forceful than that of the average housecat. For this reason, they are not recommended for homes with small children.

Ocelots are small wild cats that originated in South America. They are small for a wild cat, ranging from 18 to 35 pounds and up to 20 inches tall. They are a challenging breed, known for ignoring commands and discipline. A well-handled pet Ocelot can be affectionate to its owner, but they require a great deal of attention. Ocelots show off their wild nature by climbing and leaping throughout their home and can be a bit like a bull in a china shop. It’s easy for an ocelot to inadvertently hurt its owners while playing. Salvador Dalí famously had a pet Ocelot who often traveled at his side.

The Savannah is a hybrid cat breed created by crossing a Serval with a domestic cat. These are popular among exotic cat fans because they have the look of a wild cat but the personality of a housecat. When socialized properly, Savannah cats can be a loyal, loving member of a household. They are inquisitive by nature and will find ways to open doors and climb on top of refrigerators to satisfy their love of heights.

Caracals are a type of Lynx from Africa, notable for their reddish-brown fur and pointy, black, tufted ears. Ancient Egyptians tamed Caracals as hunting partners; centuries later, they have not been fully domesticated. People who choose Caracals as pets say that they are friendly and playful but roughhouse and mostly communicate through hissing. As adults, they weigh an intimidating 30-50 pounds. These are considered big cats, so they aren’t legal to own in many areas.

The Canada Lynx is one of the most popular choices of pet wildcat. They stand between 19 to 22 inches tall and can weigh up to 40 pounds. Canada Lynxes are distinct from other species of Lynx because their coat can range from light brown to black. When trained from kittenhood, they can be a social, affectionate pet, but this can depend on the personality of the individual cat.

Taking on the care of a wild cat is not something that should be done lightly. For the vast majority of cat lovers, these wild cats are best appreciated from afar, either in big cat animal sanctuaries or in nature.