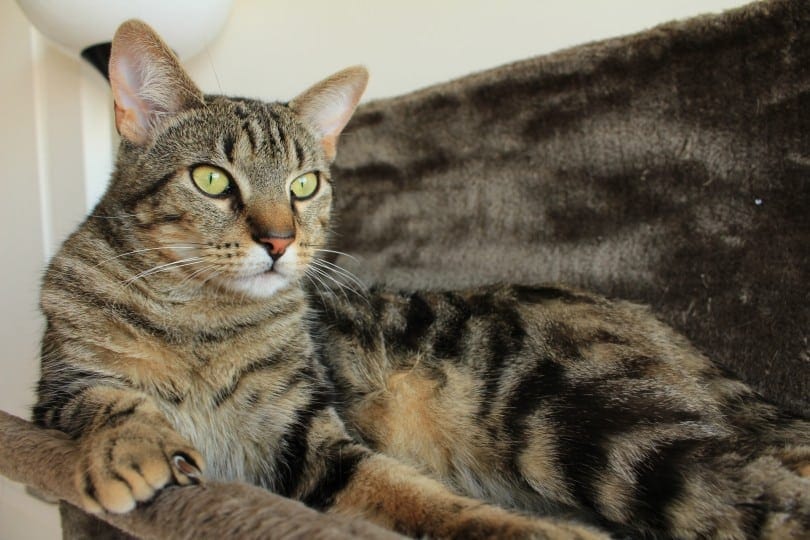 Lovingly referred to as the “mutts of the feline world”, the Domestic Shorthair is any cat of mixed-breed origin that has a short-haired coat.

And this just doesn’t mean the strays wandering around your neighborhood.

In fact, Domestic Shorthair is the most popular cat breed in the world! And it’s super easy to see why. These cats are often some of the friendliest felines you’ll ever meet, extremely low-maintenance, and have very few health problems.

Since these little buggers are of mixed breed, they can also come in a cornucopia of colors from orange to brown to black and everything in between. No two cats will be exactly alike, and it’s that uniqueness that helps make them even more special.

Domestic Shorthair Kittens – Before You Buy…

Choosing to become a Domestic Shorthair parent is a decision that shouldn’t be taken lightly. Even though they’re not the most difficult breed to take care of, you are undertaking a major responsibility when getting one.

As stated above, these are the most popular household cats in the world. But they’re also the most commonly found cat out on the street.

And just because you’re adopting a stray doesn’t mean you’re bringing some mangy cat into your home. Often, you’ll find tons of kittens at your local animal shelter abandoned by cat parents who just couldn’t take care of them. These little furballs need your help to start a new life.

But many times, the most affectionate of shelter cats are the older cats. Cats have a very funny way about life. They seem to acutely tune in to the nuances and curveballs life throws at them. And they’ll be eternally grateful and loyal if you can provide a warm bed, food at regular intervals, and much-needed love.

If you’re looking for the most inexpensive cat breed around, you’re in luck. Domestic Shorthair kittens are exceptionally cheap to acquire. Many times you can pick up a new kitten for free or for the low cost of adoption paperwork.

After adoption, the next biggest cost will come in the form of food and litter. Fortunately, these don’t have to be too expensive either. There is plenty of great cat litter as well as nutritious food options available at all price points.

Buying a Domestic Shorthair directly from a breeder can set you back anywhere from $100-$600, depending on the kitty.

Just like their coat color or pattern, there is no hard and fast rule concerning a Domestic Shorthair’s tail size. Some have long flowy and fluffy tails, while others have short bobbed tails like the Manx. This just further shows their genetic diversity.

Although the Domestic Shorthair is a mixed breed, its commonality has allowed it to be recognized by different international cat clubs. They may not have their own pedigree, but the International Cat Association (TICA), the World Cat Federation, and the International Feline Federation all allow the common housecat to enter and compete. However, they’re normally vying for the position of “Best Housecat”.

In the pioneer days of the United States, Domestic Shorthairs were a form of cheap labor used to keep food storage and rations free from rats and other vermin. This helps to maintain food supplies while trekking across the country and blazing new trails.

Temperament & Intelligence of the Domestic Shorthair

The Domestic Shorthair doesn’t just have endless possibilities when it comes to physical attributes. They can have widely differing personalities and intelligence levels.

Some Domestic Shorthair cats will be goofy little couch potatoes who want nothing from you but a good snuggle. But others may be a bit more sneaky and sophisticated. There’s no singular category that these cats will fall under. However, they’re generally playful and adore their owners.

Domestic Shorthair cats can make for excellent family pets. They’re often quite playful and enjoy the company of younger children. And they’re also smart enough to get out of the way if a child starts to become too rowdy.

This is entirely dependent on each cat and the other pet in question. Generally speaking, cats don’t do too well with smaller pets such as lizards or rodents. By nature, they have an extremely high prey drive and may hunt them given the chance.

However, dogs are a different story. Often, it’s the cat who becomes the hunted. That being said, there are tons of great examples of dogs and cats living harmoniously together. It just all depends on the personalities of the two animals.

Things to Know When Owning a Domestic Shorthair:

Owning a Domestic Shorthair is relatively easy—especially when compared to other cats. However, let’s take a look at some particular things you should know when raising one.

Feeding your cat is a pretty straightforward process. They only require about one cup of high-quality cat food per day to stay fit and healthy. For this, we recommend a high protein diet such as Taste of the Wild Rocky Mountain. It’s a high-protein, grain-free formula that has everything your cat needs for a healthy lifestyle.

Just be forewarned—Domestic Shorthairs are extremely prone to obesity. They love to eat! So, make sure that you stay on top of their feeding habits. And don’t fall for their tricks if they start begging for more.

Domestic Shorthairs need to exercise every single day. But that doesn’t mean you need to take them out for walks. Cats usually exhibit short bursts of playful energy throughout the day. This can come in the form of zooming around the house or playing with some toys.

However, cats are nocturnal animals. And you may find that your cat is most active at night. If so, this may be difficult for light sleepers. However, if you can designate a certain play area for your kitty while you’re sleeping, you don’t have to worry about them running about your bedroom while you’re trying to catch your forty winks.

Training a cat is possible, but it’s not normally like training a dog. Instead of training your cat to do certain tricks, you can train them to alter their general lifestyle. For instance, if your cat has a habit of jumping on the kitchen counters, they can be trained to stay off.

However, don’t expect them to be playing dead and rolling over anytime soon. While some cats can do this, it’s much fewer than YouTube will lead to believe.

Cats are super-easy in general when it comes to grooming. And that’s because they take care of themselves. Most cats are extremely clean animals. You’ll often see them using their rough tongues as slicker brushes to remove excess hair or dirt from their bodies.

This can lead to excessive hairballs in some cats. If that’s the case, there are some specialty foods out there that can minimize this issue through the use of special fiber blends. Blue Buffalo Wilderness Indoor Hairball and Weight Control Chicken Recipe is one that we highly recommend if you need extra hairball assistance.

When compared to other cat breeds, the Domestic Shorthair is an extremely robust and healthy cat. This is most likely due to their mixed-breed heritage and genetic makeup. However, there are a few conditions that can affect them.

The most serious of these ailments are kidney disease, hyperthyroidism, and respiratory issues. However, these aren’t exclusive to the Domestic Shorthair and aren’t commonly experienced. The minor ailments they suffer from can be relatively common but avoidable such as skin allergies, obesity, and urinary tract disorders.

The biggest difference you’ll see between males and females is when they reach sexual maturity. When left unneutered or un-spayed, cats will start to exhibit certain territorial and mating behaviors. While your female cat may yowl loudly and become a master escape artist, it’s the males that may be more out-of-control.

Male cats will begin spraying to mark their territories and signal to females that they’re around. This can become a major issue particularly for your furniture, walls, and another household décor. Cat spray also leaves behind a very pungent odor that is very difficult to mask or remove.

However, most of this can be avoided by simply getting your pets spayed and neutered.

If you’re looking for a new cat to join your family, consider a Domestic Shorthair. Sure, they might not be a fancy pure breed. However, if you’re not planning on showing them or breeding them yourself, you’ll find that a Domestic Shorthair may be just as loving and amicable as any purebred cat.

Domestic Shorthairs can range in all sorts of shapes, sizes, and colors. And there’s bound to be one out there that’s perfect for you. They’re also wonderful cats for first-time owners. These mutts are very low maintenance compared to other breeds, and their short coats shed less than other longer haired varieties.

And finding a new cat isn’t going to break the bank or cause headaches while searching. Just head down to your local animal shelter and play with the cats there. You’re bound to fall in love with at least one of them. And after that, it’s simply a matter of signing the papers and taking home your new best friend.

Did you know that cats have a low thirst drive? In the past, felines had a majority of their hydration…
The category

7 Ways to Calm a Cat in Heat (With Pictures)

When your female cat comes into heat, it can be a stressful time for her and her owners! Your cat…
The category

Despite their reputation for being aloof and unaffectionate, Siamese cats are actually some of the most loving and loyal creatures…