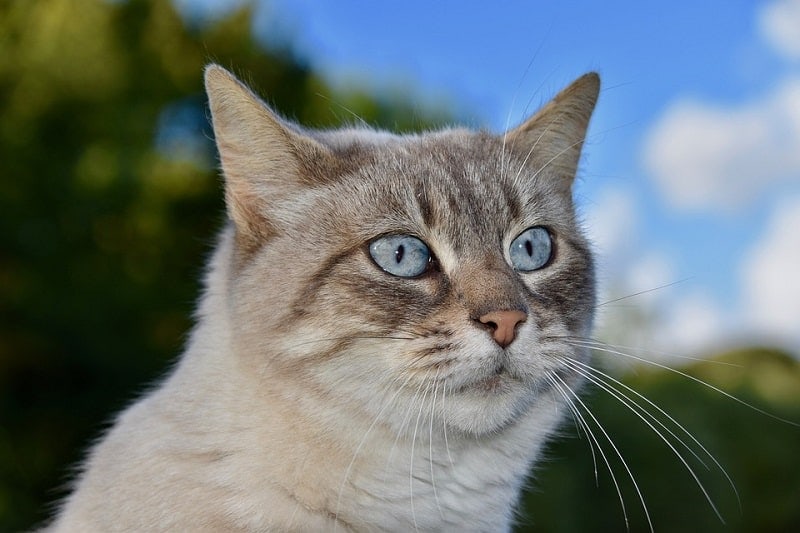 In Europe, the European Shorthair cat is widely considered to be the most popular breed of housecat. They have lively personalities brimming with intelligence and live for up to 20 years. These cats are thick and muscular, helping them achieve a high degree of athleticism, though they do tend to have soft bellies with a pooch.

This is a varied breed, and you can find European Shorthairs in a wide range of colors and patterns. They’re medium-sized cats that generally weigh no more than 15 pounds. They’ll perform most of their own maintenance, though you’ll still need to a little to keep them in top shape.

Overall, European Shorthairs are loving and affectionate cats, but only with their families. They can bond with several family members and they will want a lot of your attention. They’re not often demanding about it, but they’ll want lots of your time and affection, nonetheless.

With family, these are playful animals that want to tear up a mouse toy or chase a laser pointer. But when it comes to strangers, they can often be shy and reserved. Regarding other pets, they tend to be quite territorial, so they’re not always a good fit for multi-pet households.

European Shorthair Kittens – Before You Buy…

The price of these cats can range drastically depending on their bloodlines and history. However, on average, they’re pretty affordable pets, even in the US where they’re much rarer than in Europe.

If you’re looking to add a European Shorthair kitten to your family, you won’t have to budget too much for the expense. You can easily find one of these kittens for $50 or even less. They often sell for as cheap as $30!

That said, there are plenty of specimens that go for more. Some European Shorthairs with pedigreed bloodlines can cost $400. If they have incredibly special qualities, they might even cost upwards of $1000, though this is pretty rare.

Despite the high price that a few select specimens can demand, on average, European Shorthair kittens cost between $50 and $150.

1. They can be traced back to Ancient Rome.

It’s not uncommon to be able to trace the lineage of modern cat breeds back to their ancient roots. For the European Shorthair, those roots stretch back to ancient Rome. In fact, the Romans are responsible for the spreading of this breed across Europe, resulting in their high popularity and availability today.

When Roman invaders traveled across Europe to expand their empire, many early European Shorthairs traveled with them. They were highly desired for their impressive hunting abilities, which kept rodents and pests at bay. During those times, rats and other rodents could easily decimate food supplies, but the accompanying cats could put a stop to this threat.

As the Romans made their way through Europe with their Shorthair companions in tow, these cats started making their way onto farms across the continent. They were popular among farm owners for the same reason they were popular with the Roman legions. These cats are adept hunters that were able to keep exploding rodent populations from destroying the farmers’ crops.

2. They’re the National Cat of Finland.

The European Shorthair continued to spread throughout Europe, continually growing in popularity. Eventually, they made an appearance in Sweden, already bred into a lovable cat with many desirable traits. It appears that everywhere this breed showed up, they grew in popularity, thanks to their playful, active natures and incredible hunting abilities.

Even today, these cats are widely regarded as one of the most popular breeds in all of Europe. In Finland, they’re even the national cat, showing just how beloved this breed really is.

3. They weren’t recognized as a separate shorthair breed until 1982.

Even though this breed has been around for centuries, there was a lot of confusion surrounding the breed for quite some time. Most of this was due to the similarity in the names of several close breeds, like the British Shorthair and Celtic Shorthair.

For many years, these names were often used interchangeably, despite the fact that these are completely separate breeds.

Thankfully, many breeders wanted to maintain the differences in these breeds, and the European Shorthair in particular. But it wasn’t until 1982 that this breed received true recognition as its own breed, separate from other similar Shorthairs. They were recognized by the Federation Internationale Feline or FIFe, and a set of breed standards was developed.

One of the best traits about the European Shorthair and part of the reason for their immense popularity is their ability to adapt to just about any situation. This makes the breed extremely versatile, allowing them to fit well with individuals, families, farmers, and more.

In truth, European Shorthairs can span a wide range of temperaments and personalities. Some of them are quite shy and don’t show much love or trust for strangers and can even take a while to warm up to their families. Others are playful and active from the start, showing loads of affection for family members with plenty of energy to fuel their antics.

Many European Shorthairs are inquisitive and outgoing, looking for opportunities to explore and play. Others are much shyer and can show a very reserved personality; especially around strangers. But most of these cats can form deep and lasting bonds with their families.

Another common trait of this breed is an affinity for the outdoors. They love to spend time outside, though this can sometimes prove dangerous for a housecat. As such, many owners of these felines will setup a perch near a window so their cat can get a taste of the outside without risking their health and wellbeing.

In general, this breed tends to bond strongly with their family, which is part of the reason for their widespread popularity. Even the more reserved and shy European Shorthairs tend to form long-lasting bonds with family members.

Regarding children, this breed does well, so long as the children understand how to handle a cat. If they play too rough, the cat can become overwhelmed and will avoid the children. But if they’re calm and treat the cat appropriately, they should be able to form the same loving bonds that the cat will form with their adult owners.

European Shorthairs tend to be quite territorial. As such, they won’t always get along with other cats or dogs. That said, there have been many examples of these animals doing well with both cats and dogs. A lot of it has to do with the other pets. If they aren’t aggressive, then there’s a better chance of them getting along. But if your Shorthair is very territorial, then they may never get along with other pets.

Still, by introducing your European Shorthair to other pets early on, you might be able to sway their opinion and make them comfortable with other cats and even dogs. However, you should always avoid having these cats around small pets like hamsters and gerbils. The cat’s hunting instincts are more than likely to take over and result in a very predatory cat and a scared, anxious rodent.

Things to Know When Owning a European Shorthair Cat:

European Shorthairs are relatively easy cats to care for. They don’t have any specific dietary requirements. You’ll do fine feeding your cat a high-quality dry cat kibble that’s high in protein and low in carbs. You can also supplement their diet with canned cat food to ensure they’re getting plenty of diverse protein sources.

This breed is moderately active. They won’t require much exercise aside from a good play session once or twice each day. For the most part, they’ll take care of this themselves. Just make sure you have plenty of fun toys on hand for them to play with. Small mouse toys are excellent, but you’ll have to figure out which toys your cat prefers. Like with most cats, you can always rely on the trusty old laser pointer and have some fun watching your cat chase it around while they’re getting plenty of exercise.

European Shorthairs are considered to be highly-intelligent felines. As such, they’re generally very trainable and are known for learning quickly.

Compared to other cats, this breed doesn’t require much grooming. They don’t have an undercoat and they’ll take care of most grooming on their own. All you’ll have to do is provide the basics. Brush their coat out once or twice a week. While you’re at it, ensure that their ears are cleaned and nails are trimmed.

Overall, European Shorthairs are considered to be a hardy breed that’s not susceptible to many health conditions. Still, there are some concerns that you ought to keep an eye out for if you’re going to own one of these cats.

There are good reasons why the European Shorthair has become one of the most popular breeds of feline in all of Europe. These cats are easy to care for and make excellent companions. They’re affectionate, loving, and can bond with every member of the household. With luck, yours might even get along with other pets.

European Shorthairs are incredibly adaptable cats, doing well in a variety of situations. They’ve been popular since the times of ancient Rome, and their popularity shows no signs of waning. Whether you need a loving companion or an adept hunter to keep rodents at bay on your farm, the European Shorthair is a breed that’s worth considering for any would-be cat owner.

There are tons of exceptional cat breeds that offer magnificent coats, colors, and patterns. Rex cats are nothing short of…
The category

The Selkirk Rex is one of the only four cat breeds with wavy fur, the others being the Cornish Rex,…