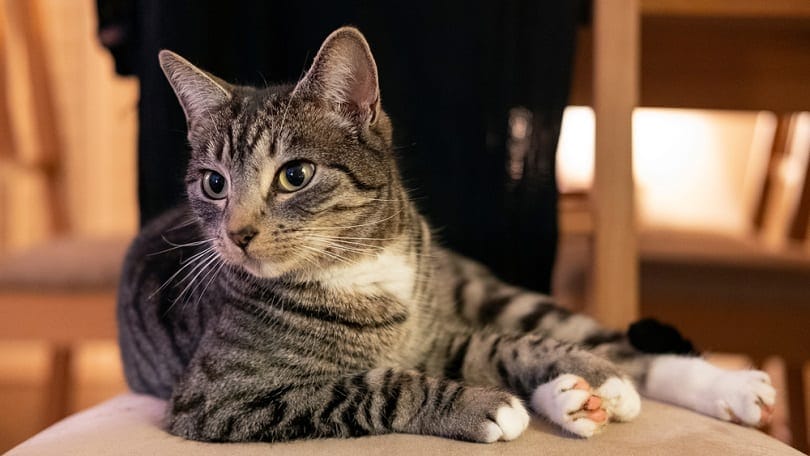 There’s something so iconic about the mackerel tabby. Maybe it’s their tiger-stripe pattern or the signature “M” shape on their foreheads. Either way, these tabby family members are easily the most recognizable!

Do you want to know some more about mackerel tabbies and tabbies in general? Check out these 10 fascinating facts!

1. Tabby Refers to a Cat’s Coat, Not the Breed

Tabby cats aren’t a particular breed. Tabby simply refers to the color and pattern of their coats. Tabbies are found across many breeds such as the Maine Coon or Norwegian Forest Cat. And there isn’t just one type of tabby cat either.

Mackerel tabbies are among the most recognizable because of their narrow tiger-striped pattern. Classic tabbies have bold, circular, and swirling patterns as if they had a large bullseye painted on them. Spotted tabbies are spotted like leopards either on one part of their bodies or all over.

Ticked tabbies are generally one color, however, you’ll find that they have small marks (or ticks) along with their facial structure. Patched tabbies can show any of the patterns mentioned above, but it’s usually only along the face and head in areas much larger than ticks.

2. Mackerel Tabbies Have a Distinct “M” Shape on Their Foreheads

If you look at any mackerel tabby’s face and forehead, you’ll notice that they have a distinct “M” that runs from eye to eye. This isn’t just some random coincidence. The “M” pattern is actually coded into their DNA. That’s why every mackerel tabby has it.

Their “M” marking goes back to the times of the ancient Egyptians where it was once worshipped as sacred iconography. Other stories equate the pattern to blessings from Islamic prophets or a blessed Christian virgin mother. But you’ll find this marking on every mackerel tabby that you’ll ever meet.

3. Tabbies Were Named After a Baghdad Silk 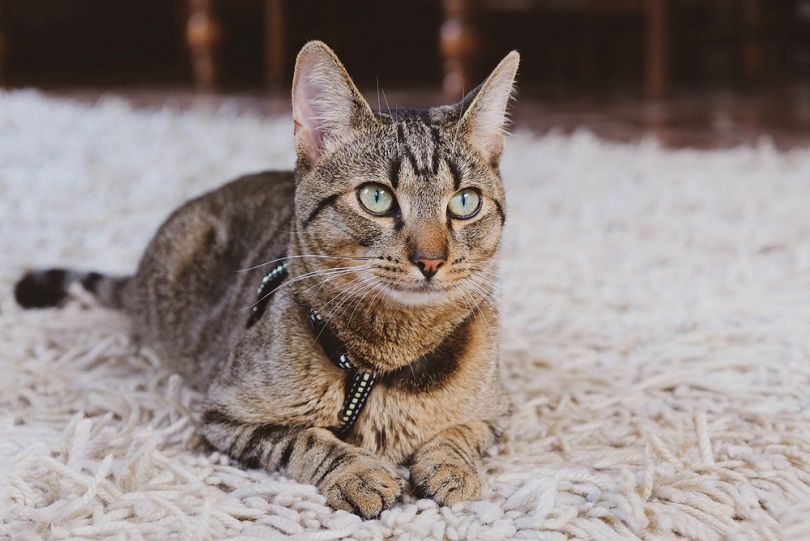 The markings and coat of the tabby are so luxurious they were once commonly compared to fine silk from Baghdad that originated in the Attabiy district. This was translated over via 14th century middle French as “atabis”, then shortened to “tabis”.When the word finally made the jump across the channel to England, the name was eventually translated into the recognized term today: tabby.

4. Tabby Cats Were Among the Very First Domesticated Cats

In nature, there are 5 different genetic strains of a wildcat, and mankind has only succeeded in domesticating one. And of that particular genetic strain, tabbies were the first to become tame. The first of these domesticated cats were working animals.

They were believed to be pets and assistants to Mediterranean farmers. Ancient farmers quickly discovered the benefits of keeping their hard-earned grain rodent-free and saw that tabbies were great mousers.

Tabbies were often kept in granaries and silos to hunt down the vermin population. Later, tabbies traveled on merchant ships alongside the crew to help reduce stowaway rodents at sea.

5. Mackerel Tabbies Are Associated With Witchcraft

While most people associate the black cat with witches and warlocks, it’s the mackerel tabby that should get the honors. During the 16th and 17th centuries, all female cats were referred to as tabbies. More specifically though, as female cats belonging to witches. These tabbies were the witches’ familiars and were believed to be possessed by a demon or human soul.

The mackerel tabby was supposedly the preferred pattern choice of witches over black cats. This led common folk to believe that mackerel tabbies were imbued with magical properties and had nine lives.

Out of all the tabby patterns, the mackerel pattern is believed to have been the first one. It’s been speculated that the pattern emerged through the genetic combination of the European Wildcat and the African Wildcat—both of which have faint narrow striped patterns.

When most cat lovers think of mackerel tabbies, they probably imagine a grey-based cat with dark brown or black stripes. And while this is a very popular coat for mackerel tabbies, it’s not the only color they can be.

Generally speaking, tabbies have either a gray or orange-based coat with signature brown or black stripe markings. However, some cats may have silver or even white markings. Mackerel tabbies that are orange and black-based are often called “marmalade cats”.

8. Mackerel Tabbies Are Considered to be More Intelligent and Adventurous Than Other Tabbies

Most mackerel tabbies are super-playful cats. They just love interacting with their owners and should always have plenty of toys around. These tabbies are also known for their bold sense of adventure and their desire to completely explore their surroundings.

Many cat owners consider them to be more intelligent than other types of cats as well. They are rather clever and often act more like dogs than cats. They’ll follow you around as a companion, play fetch, and snuggle close when it’s time for bed.

9. Mackerel Tabbies Got Their Name From the Fish

You would think with their tiger-striped pattern that mackerel tabbies would get their name from the ferocious big cat. However, such is not the case. Instead, they’re named after the mackerel fish.

And if you’ve seen a mackerel fish before, you might think you understand why. Mackerel have very defined striped patterns that run along the length of their backs from tip to tail. However, it’s not from the fish’s pattern that the name is derived. Instead, it comes from the fish skeleton after the meat has been picked clean from its bones. Still, it would make sense to call them “tiger tabbies”.

10. The Record for World’s Fattest Cat Was Once Held By an Australian Tabby

The title for World’s Fattest Cat was once held by an Australian tabby named Himmy. At the time of his death, Himmy was 10 years old with a waistline of 33 inches! He weighed in at an astonishing 46 pounds and 15.2 ounces.

Shortly after his death, however, the Guinness Book of World Records discontinued the award to discourage anyone from intentionally fattening up their cat to break the record.

Is Borax Safe for Cats? What You Need to Know!

Borax is a multipurpose cleaner that can be used for any number of things, from stopping an infestation of ants…
The category

Can Cats Understand Humans and Our Language? You Might be Surprised

As loving pet owners, it’s all too easy to anthropomorphize our pets. We often assign human emotions to their facial…
The category

Norwegian Forest Cat vs. Maine Coon: What Are the Differences? (With Pictures)

The Norwegian Forest Cat and the Maine Coon share many similarities, and it’s easy to see why people often get…